‘Ireland from the sea is another country, and one that most people never see’ 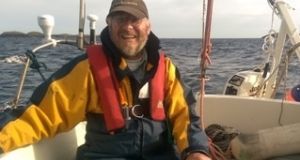 Richard Kennedy: Round Ireland by Slow Boat is his first book

Jacques Cousteau, the French marine explorer and conservationist, was passionate about the sea. He once wrote: “The sea, once it casts its spell, holds one in its net of wonder forever”.

The English writer, Samuel Johnson, describing his impressions of life at sea, phrased it rather differently: “It’s like being in jail, with a chance of being drowned”.

With the prospect of just my wife Rita and myself being at sea together for an entire summer, living in the cramped confines of a sailing boat, which was it to be for the two of us?

We have been sailing for many years but this trip was a more demanding undertaking than any of our previous voyages together. Long threatening had come at last. With responsibilities of family and work diminishing, we had finally got the time to fulfil a mutual promise; to sail, without hurry or haste, around Ireland.

As we made our long slow sailing voyage around this beautiful isle, we were pretty firmly on the side of Jacques Cousteau, as the sea once more cast its spell over us, and we are still happily caught in that net of wonder.

There were unexpected twists, there were surprises, and there were unforgettable moments of exquisite serendipity. There was the best of sailing in fresh sparkling seas, there was the contentment of sailing quietly into secluded little bays and dropping anchor in the setting sun. There were reunions with old friends, and the pleasing experience of making new ones. There was excitement, laughter and music and, in between, there were precious spaces of splendid peaceful isolation.

However, without prejudice to the foregoing, as lawyers just love to say, there were some occasions when I felt myself sidling over towards the jaundiced views of Samuel Johnson.

At school an otherwise kind teacher once said to me, with an air of vehement satisfaction: “Kennedy, I can see prison bars in your eyes”.

His had been a harsh response to yet another novel but tragic tale from me concerning a blank homework copybook. Now, in the moments when our boat was being tossed and chucked violently on the waves, I began to wonder if my teacher really had been the man of foresight he believed himself to be, and had indeed foreseen an incarceration for me. Perhaps this was it.

There were nights when, as the incessant clanging of the rigging in a rising gale began to reverberate through the boat, I imagined that it sounded ominously like the jangle of keys locking a prison door behind us. The unrelenting rattle of the anchor chain tugging and straining on the bowsprit became the fetters and irons of a dungeon.

There were hours of cold, wet, miserable, occasionally frightening, sailing. The weather, at times, was appalling. The weather forecasts were more psychiatric than meteorological. For weeks it was the same: “An unstable and complex depression covers Ireland”.

Rita bore all of this with calm serenity, leaving me the freedom to indulge in catastrophic thinking whenever I felt the circumstances to be appropriate. Hospitable to a fault, I like to meet trouble half-way.

For all of that, these were just fleeting moments of shadow in a venture that was otherwise awash with lightness. Shadows give depth, and together that light and shade combined to make up a glorious unforgettable picture, leaving us with an experience to be treasured. Ireland from the sea is another country, and one that most people never see. This voyage followed its meandering coastline with its rich variety of landscapes, from the stark and lonely shorelines of Mayo and Donegal to the gentle coast of the east; the sweeping vistas to the south to the rugged unforgiving splendour of the western seaboard. This was the Wild Atlantic Way at its most real.

The journey started long before the sails were hoisted. Our boat, Seachrán, is a well-built and seaworthy steel sailing cutter, small enough to be handled by both of us and large enough to give comfort in rough seas.

Seaworthy though it is, Seachrán needed outfitting and upgrading. New sails were long overdue, the navigation equipment was becoming obsolete, new windows had to be fitted, safety equipment had to be added. The to-do list became formidable. This became our primary focus, and became a project in itself. My schedule of essential matters to be attended to began to grow, and with three months to go before our departure it was still a daunting list. By that time we were well past the point of no return, and only the insurmountable could dissuade us. Insurmountable was not a permitted item on the agenda, which neatly solved that problem.

The voyage was intended to be completed over one summer, but, strange to say, as good fortune would have it, the summer of 2017 turned into one of unsettled, unpredictable weather, making our progress much slower than planned. As the summer went on our leisurely advance gradually introduced the notion that we should consider a change of plan, and that thinking eventually translated into a decision to make this a journey of two halves. The following summer brought the glorious sunshine and blue skies of childhood memories and allowed us to turn what had originally been a planned 10-week trip into a five-month total voyage.

The story of our lives is not simply a chronological diary of events. It encompasses thoughts and feelings, memories and hopes. And so it was, as we journeyed around the coast, or lingered in harbours, memories and impressions of past voyages in these waters, both good and bad, came flooding back like an incoming tide.

The poet Patrick Kavanagh longed to “Snatch out of time the passionate transitory”. Our voyage had given us some element of that; we had stepped out of busy schedules and timetables and submitted ourselves to the natural rhythms of tides and weather. Time assumed a secondary place. All of this became an essential part of our story, Round Ireland by Slow Boat.

And so, in the competing literary equations between Jacques Cousteau and Samuel Johnson, was there a verdict?

Perhaps the final judgement of that should be left to the reader.
For more information see roundirelandbyslowboat.net. Richard Kennedy grew up in Birr, Co Offaly, an area not noted for its maritime tradition. During their courtship Rita introduced him to sailing and from that moment there was no going back. Together, and with their two sons, they have sailed extensively in Ireland’s inland waterways and coastal waters. His work, and vocation, is in law, and he practices as a solicitor and arbitrator. Round Ireland by Slow Boat is his first book