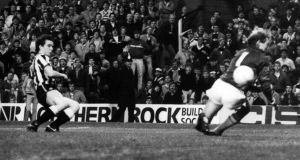 Book Title:
The Boy On The Shed

In August 1991, Chelsea football club descended on Bundoran for a pre-season training weekend. Nobody paid much heed to the superstars: Dennis Wise was free to bop around one of the night-club’s on Main Street in a florescent white tank-top; Andy Townsend pottered around the swimming complex and Paul Elliot was happy to talk football with all-comers after ducking into a cafe for a late night curried chip. Vinnie Jones was nowhere to be found. Chelsea were about to embark on the last season before English football experienced its big bang: the Premier league.

Those two distinct worlds – Donegal summers and English football – intersect at the beginning of Paul Ferris’s tightly observed memoir of a life defined by an early brush with football glory. Ferris was a Lisburn Catholic boy (b 1965) whose family lived in the predominantly Protestant Manor Park estate so he was the perfect age to experience the perfect terror that swept through the household as sectarianism took a grip on the land. The few summer weeks spent in Bundoran were a blissful escape from the stress and hassle – the house was petrol bombed, his parents beaten up by sectarian thugs – of the Troubles. Like many teenagers, Ferris wanted out: his exceptional skill as a quicksilver, left-footed winger offered him an opportunity and at the age of 15, he set off as an apprentice with Newcastle United. So this story works on two levels. It is partly a meditation on the effects of leaving home while little more than a child and adjusting to the relative safety of England’s declining industrial cities while Northern Ireland – home – raged. And it is also a shuddering reminiscence on the loneliness and strangeness of life for the hundreds of gifted young footballers who tried to cut it as professionals in the decades when duty-of-care to youngsters was primitive and casual.

Ferris went further than most and was, fleetingly, a prodigy. In April 1982 he became the youngest ever Newcastle United player to play in a first division match since the foundation of the club in 1892. He was just 16 and the manager, Arthur Cox, and coaching staff were smitten. He came through with Chris Waddle – “a big, loping lazy-looking lad with a languid running style” – and was there when Tyneside went berserk with the arrival of Kevin Keegan. The mop-headed icon told him: “You can end up at Manchester United or Crewe United. It’s up to you.”

In fact, Ferris wore Keegan’s number seven jersey when he made his full debut that December and came tantalisingly close to immortalising himself with the Toon army by scoring: a divot, an odd bounce and the post denied his header. Ferris did, in fact, score for Newcastle and at least felt the rush of elite football. But injury destroyed his promise. A series of hamstring injuries interrupted his progress and the combination of a torn ligament and insufficient rehabilitation led to a year sliding by with no football. When his contract lapsed, he wasn’t offered another. “The truth is I’d disappeared long before I left the building,” he writes. He discovered that the welfare office is situated in St James Place – directly behind Newcastle’s football stadium. As he got off the bus, he saw defender Glenn Roeder driving through the gates and lowered his head so he wouldn’t be noticed: just like that, he was locked out of the football world.

In the end, he does return to the club but as a qualified physiotherapist. This is where the book becomes invaluable: Ferris is present as a trusted confidante and a fly-in-the-liniment in the years when Newcastle and English football began the transformation from the rigorously parochial to the global entertainment it has become.

Ferris is illuminating on the various stars who pass through the club: Ruud Gullit comes across as a genuinely dismaying and small man, Alan Shearer as a salt-of-the-earth friend. Jack Charlton is just as you’d expect: “No half volleys. I hate half volleys,” he chides at an early training session and lands into hospital to visit Ferris when he is stricken with a kidney clot one Christmas. “Jack came in that night, opened my door, and threw a bag of sweets onto my testicles. I opened the bag and inside was a plane ticket to Belfast departing the following day. He stayed for five minutes talking to the nurses about the difference between pink and salmon. As he was closing the door he spoke. “When you get back come and see me about a pay rise and sorting your contract out, Ferrisie. You’ve done well for me. I’m off.”

Charlton was as good as his word and the following year, Ferris persuaded his childhood girlfriend Geraldine McCaugherty to move to England, where they were eventually married. They weathered the anxieties of the abrupt end of his football career and dragged themselves up through education – Geraldine qualified as a teacher, Paul as a barrister and physiotherapist.

In a way, there are two books contained within here. Ferris’s life as a Troubles-era youngster is adroitly told and heartfelt but not that unusual. However his football career as almost-star-turned-in-house-staff man is grippingly delivered. In one memorable episode, Ferris finds Bobby Robson, another of the game’s true gentlemen, sitting alone in the canteen early one morning in the summer of 2004. “He was holding a limp piece of toast in his hand. He never moved.” The manager seemed to be in shock. “I think I’m gone, son,” he told Ferris. “They want to meet me at the ground in 20 minutes.” It’s a moment that distills the mercilessness and randomness of professional football; how casually it spits out lives. Ferris, through his early bad luck, could have become one of the victims of the game but was smart enough to navigate his own path to become, as Shearer notes in his foreword “a fighter and – as you will see – a writer.”