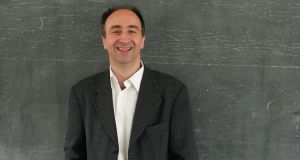 New Yorker critic James Wood is considered by many to be the most influential anglophone literary journalist living, and his taste has been getting more radical. If he could, he’d dispense with the mechanics of fiction entirely to get to the kernel of life-essence formed under the pressure of these conditions.

In a review of Ben Lerner’s Leaving The Atocha Station, which became an essay in his 2013 collection The Fun Stuff, he praised how Lerner captures something “that most conventional novels, with their cumbersome caravans of plot and scene and ‘conflict’, fail to do”.

Considering his criticism, Wood’s own second novel, 15 years after his first, The Book Against God (2003), is both fitting and surprising. Fitting, in that it is interior-led with little in the way of exuberant plot, juicy revelation or narrative jeopardy; surprising, in that it is so unradical in form – a conventional but gentle, almost light-hearted realist novel, with a lovely warmth.

Alan Querry, a self-made property developer in his late 60s from Durham (where Wood is from), has two daughters. Helen is a vivacious Sony executive who wants to launch her own business. The action, coming as it does in 2007 at the start of the visible decline of the music industry’s traditional business model, suggests Helen is on the cusp of inventing a platform similar to Spotify, the music streaming service.

Vanessa, her older sister, is a philosopher at an upstate New York liberal arts college who has been too reticent to fulfil her promise. Her “fixed bibliography” includes a single mordantly titled, non-existent book: Four Essays on Personhood (forthcoming). She hates confrontation and the smallest thing triggers existential despair. “Helen did things while Vanessa thought things,” is the family maxim. Alan and Helen fly out to Vanessa when she is injured in what may or may not have been an attempt at self-harm. The gathering induces a quiet unfolding of old resentments, but also an affirmation of old loyalties.

Dialogue, too, can feel transparently functional, though it is often leisurely and pleasing

A third person hovers close to the three Querrys, putting their thoughts in a fine prose belonging to the author but meeting the needs of the characters. Brussels sprouts at Christmas are “boiled into ragged submission”. Alan’s wife died of “cancer that had taken so long to plot its steady theft”. An old Americanised European “sprinkled umlauts over the needier vowels”. On cherry blossom: “The air around it seemed to be charged with pink activity”. Meanwhile, northern colloquialisms rise to the surface of Alan’s memory in funny, Bellovian intrusions, as when he looks at his body in the bath, noticing how his genitals “looked darker than the rest of his body, as if somehow [they] were older than the rest of him. White meat or dark meat?”

Wood may be tired of the “caravans” of conventional fiction, but a novel of the sort he has written by necessity comes with them. Conventional realist characters are laden with the possessions of a fictional life that require upkeep. Alan’s life has been taken up with property in the northeast, so a lot of his mind-time is going to be occupied with it. And as he’s a sturdy, plodding sort of bloke, his reflections are hardly going to be the stuff of Donald Trump memoirs or Tom Wolfe novels (two figures Wood ascribes almost equal vulgarity). Still, Alan has to think about it, Wood has to write about it, and we have to read about it.

Dialogue, too, can feel transparently functional, though it is often leisurely and pleasing. Characters give each other cues, righting the conversation so it can go where the author wants it: “So – what questions do you have from today’s adventuring?” Vanessa asks Alan. “Tell me what you know about Josh?[Vanessa’s younger lover]” Alan says to Helen after an unrelated train of thought. It’s forgivable, and prevalent in writing, not least because real people actually do this, but it can look on the page as if a seam is being revealed.

And yet, these caravans give the novel a warmth that – bearing in mind Wood’s preference for works of at times hard radicalism – one didn’t expect to find, and is grateful for. Coupled with a fine, light touch with the movement between characters’ thought and action, Upstate has a confident quietness which also suits the region of England from where its characters hail. The softness of a Durham accent is unfussy but expressive, as when Alan thinks of his daughter Vanessa as a teenager, writing in her notebooks: “It would be funny if she were just writing jokes, or writing a letter, or doodling aimlessly.” What a beautiful, tragically impossible wish for such a serious, sensitive and doleful daughter.