Girl power: how the new feminism has embraced children’s literature

From picture books to YA fiction, it’s a great time to be a girl who loves to read 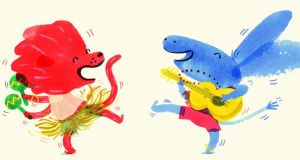 I’m a Girl!: for the heroine of Yasmeen Ismail’s book her sex is a point of pride, even if it defies stereotype and the expectations of those around her

“I’m a girl!” the heroine of Yasmeen Ismail’s picture book of the same name shrieks as she scoots around, making messes and unbearable noise. “I’m supposed to be made of sugar and spice,” she growls, “but I’m sweet and sour, not a little flower . . . I’m a GIRRRRRL!” For this blue rabbit rascal her sex is a point of pride, even if it defies stereotype and the expectations of those around her.

Ismail is just one of the 20 contemporary authors being celebrated as part of Bold Girls, a project at Children’s Books Ireland to encourage conversation about gender roles in young readers. “For some people the word bold means naughty, a character trait to be punished and curbed,” the teen fantasy author Celine Kiernan observes; for others “the word means brave, a character trait to be encouraged and praised”. By highlighting a diversity of female characters in children’s books created by women, Bold Girls wants to make room for young girls to feel validated for challenging expectations and making a stand for equality.

It is a great time to be a girl who loves to read. The new wave of feminism that has saturated popular culture has embraced children’s literature, too. For every pretty pink princess tidily lined up on a bookshelf you have fictional females flouting gender convention, and prominent protagonists have permeated children’s nonfiction, providing countless role models for young girls in every area of life, from science to sport, from singing to space. In 2017 two of the bestselling children’s books in the UK were Kate Pankhurst’s Fantastically Great Women Who Changed the World and Good Night Stories for Rebel Girls, by Elena Favilli and Francesca Cavallo; they proved so popular that sequels are published this month.

Publishers now understand the importance of representation for young readers, how seeing yourself or your life in a book is a really meaningful validation

Siobhán Parkinson, the former laureate na nóg, says: “There is very much an international movement at the moment centred on using books to provide positive role models for young girls and making children aware of the important role that women have played in making history.” Bold Girls “is an opportunity to think about the national figures we could add to the conversation in a conscious way”. Her new book, Rocking the System: Fearless and Amazing Irish Women Who Made History, adds 20 historical heroes to complement the 20 writers whom Children’s Books Ireland featured.

Growing up in Ireland in the late 1950s, Parkinson says, she never struggled to find female characters she could identify with. “There were lots of books aimed at girls, or with female main characters.” Frances Hodgson Burnett’s A Little Princess and Louisa May Alcott’s Little Women, for example, offered “strong female characters that I admired and wanted to be”. It was when Parkinson started to look for role models to pave the way from girlhood to adulthood that she began to see problems. “The books available were primarily romance, and the models put up for young women were about being well behaved,” she says. “Yes, you were supposed to value yourself, but only within certain social constraints.” As a young woman and a young writer, she “was interested in pushing those boundaries”.

Anna Carey, who writes fiction for a 10-plus audience, says there was a gap between her own life and the types of book available to her as a young reader in 1980s Dublin, too. Like Parkinson, she was not wanting for fictional heroines – Beverly Cleary’s Ramona Quimby was a particular favourite – but “there was a lot of Enid Blyton-type stuff, [in which] girls were totally stereotyped. I was lucky, because my mother encouraged us to read with a critical eye. But there was nothing that reflected my life growing up in suburban Dublin, and when you are a young reader you are desperate to find anything you can relate to. I think publishers now understand the importance of representation for young readers, how seeing yourself or your life in a book is a really meaningful validation.”

That impulse was the starting point for Carey’s Rebecca series, which is set in a fictional version of her secondary school, but it also informed her suffragette novel, The Making of Mollie; a sequel, Mollie on the March, has just been published, to coincide with the centenary of women’s suffrage. What Carey enjoyed most about writing from a historical perspective was doing research and discovering “how similar the characters’ lives were to girls’ lives today. They had the same concerns – problems with their friends, families, teachers – but obviously there were limitations when it came to their futures.” Mollie, however, takes matters into her own hands, agitating on behalf of girls like her for women’s right to vote.

Women have always been writing for children, but what has happened recently is that we have changed the way we talk about that

Parkinson’s book Amelia, from 1993, was also inspired by a young girl’s involvement in the suffrage movement. Amelia’s political awakening comes “when she realises that girls aren’t as valued as boys”. Parkinson believes that historical fiction can help young readers understand that “it has always been harder to be female than to be male, and having fictional role models conquering misogyny can be empowering; you can make life more fair by challenging the social structures”.

That sort of progressive change, for characters as well as their creators, can certainly be seen in the past decade of children’s publishing. Dr Jane Suzanne Carroll is one of the curators of Story Spinners, an exhibition dedicated to Irish women writers to coincide with Bold Girls. She observes that “women have always been writing for children, but what has happened recently is that we have changed the way we talk about that. There has been a tendency not to give women writers the same status as men because, historically, if people are writing about something domestic, as they often were, rather than big tales of derring-do, it seems more mundane, not worthy of discussion. But we are now seeing more diversity in the children’s publishing world, giving power and agency to a whole new group of people. We are much more aware of how representation works and are critical of things that use casual stereotypes rather than realistic representations.”

Story Spinners highlights the prominence of women writers in children’s literature in Ireland, offering some incredible artefacts, including a first edition of Mary Leadbeater’s 1794 book Extracts and Original Anecdotes for the Improvement of Youth – the first children’s book published in Ireland by an Irish woman – and illustrations by Maud Gonne for Ella Young’s Celtic Wonder-Tales. There are also more contemporary offerings, including Siobhan O’Dowd’s groundbreaking young-adult novel A Swift Pure Cry, whose story, inspired by the Kerry babies case, has never seemed more relevant.

Carroll argues that the historic thrust of the exhibition proves that “the new feminist movement in children’s publishing is actually not that new. From the very beginning of children’s book publishing in Ireland you can find women writing about the problems that girls are facing, about bold girls who don’t conform but make brave decisions about who they would like to be.”

What has changed, then, is the reception and respect we are willing to give these brilliant, bold girls and their creators, who offer vibrant, vital role models for readers of any gender.

Story Spinners: Irish Women and Children’s Books opens today at the Long Room, Old Library, Trinity College Dublin; Dr Susan Cahill is giving a public talk, Bold Girls: A Literary History of Wild Irish Girls, there at 5pm. Bold Girls: A Reading Guide is available from bookshops and to download from childrensbooksireland.ie. Yasmeen Ismail is reading some of her books, including I’m a Girl!, at the Mountains to Sea book festival, in Dún Laoghaire, Co Dublin, on March 21st (sold out) and March 22nd