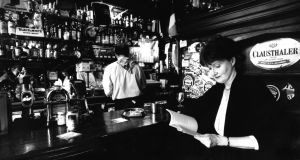 Eavan Boland at the Guinness Writers’ Lunch in Doheny and Nesbitt’s public house, Dublin, in 1994: “She will always be the friendly critic looking over our shoulder.” Photograph: Eric Luke

“You write poetry but are you a poet?” – a question put by Eavan Boland. I first met her when she led a workshop that I was part of in Dublin from July to November in 1989. You had to submit a number of poems to a kind of competition in order to be accepted into the workshop. She was a writer-fellow in Trinity College that year and had invited applications from the general public.

Workshops for writers were quite a recent development in Ireland at that time. For me a workshop in Trinity meant the summer school break in 1966 when I helped my father restore 18th-century fine decorative plaster ceilings in some of the donnish rooms in Trinity.

In that summer we were based in the college maintenance workshop near the Pearse Street side of Trinity and that’s the gate I went in every morning to mix the plaster for my father. One of those rather severe dons complained aggressively to me when I made a small splash of plaster on the cobblestones outside his doorway onto the square. “Never mind the fecker,” my father said to me but I obviously did, and at that time felt it as a kind of signal to keep off those West Brit cobbles.

I found out much later in life that was also the year that Eavan received her BA with first class honours in English literature and language from the same college. I had not heard of her of course as we fifth years were still in the 19th-century, early-20th school of literature run by the Christian Brothers just around the corner from Trinity, in Westland Row.

After I left school, I eventually grew a beard and joined the non-cobbled grounds but equally donnish English and history Departments of UCD in Earlsfort Terrace.

In that late sixties climate, I and my friends were heavily influenced by the writings and habits of the beat poets and the Liverpool Poets scene where anything alternative went. A sample is an eight-word poem by the late Adrian Henri entitled Morning Poem: “‘I’ve just about reached breaking point’, he snapped”. Free verse and new shapes on the page were where it was at. Psychedelic music and the “revolution will not be televised” raps pushed hard into the poetry of the day. So, I came with that free verse approach and Eavan was not that kind of poet. So, things got sparky at times. When she gave us homework to write a villanelle, I really struggled and had a greater respect for the classical poets after that experience.

The first meeting of the poetry workshop was held on a Saturday afternoon in the empty upstairs room of a pub on the bank of the Liffey just down from O’Connell Street bridge.

The format was: read a poem and then let’s give you a friendly critique by your fellow work shoppers and by Eavan. There were 12 (seven women and five men) of us in the group, some of them significantly younger than me and very talented when it came to putting a poem together. At least half of the group went on to become well-known poets and publish a number of collections. But Eavan did not spare her sharp and penetrating testing and teasing out of every phrase and turn of the draft poems offered up for scrutiny. She was always ultimately supportive and encouraging to perfect the form, having firstly interrogated the poem and poet.

In her essay In Defence of Workshops for Poetry Ireland Review in 1991, she referenced our poetry workshop and declared it “one of the very best workshops I have been associated with and its establishment was one of the most privileged aspects of my time as writer/fellow at Trinity College”.

A couple of us published with the help of Poetry Ireland a collection of some of the workshop output under the title Trinity Workshop Poets 1 in 1990. Eavan wrote an introduction to it and mentioned her delight at what’s in the book but also what is missing: “the intangible, unportable, atmosphere of argument and excitement which is essential to a good workshop……we had some fierce arguments, some dead-end disagreements ….at the end of the day, the argument remains unfinished; not so the poem”.

She wrote elsewhere that “a good workshop…can bring a writer to a state of crisis in relation to his or her work. In such state illuminations occur and discoveries are made which effect lasting change”. For us, being in that workshop with Eavan was one of the most privileged aspects of our time as writers. She will always be the friendly critic looking over our shoulder.

Thanks, Eavan, for all the illumination.