Dennis Cooper: the last literary outlaw in mainstream US fiction 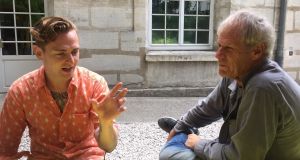 San Francisco, one summer’s evening in 1991. As they waited for the reading to start, the audience at the famous City Lights bookshop found a leaflet pressed into their hands. It was a horrible little thing: spleen vented on a typewriter, glued together, and photocopied in haste. The cover read: “DENNIS COOPER MUST DIE!”

A group calling themselves Hookers Undivided Liberation Army (HULA) made and distributed the leaflet, outraged by the way this gay author depicted gay teenagers in his novels. HULA believed (fanatically, it would seem) that a fictional character should be treated with the same respect as a real person. The fate of one had a direct causal relationship to the wellbeing of the other. “If you are not with us, piss off. Art does not exist in a vacuum.”

But it wasn’t so much an argument as a moronic outpouring of misplaced queer contempt. These were the days before you could do that kind of thing on the internet.

The audience had turned up that night to hear Dennis Cooper, the Los Angeles writer, editor and artist, read from his new novel, Frisk. Controversy was to be expected. In the 1970s Cooper was a well-known punk poet; by the 1990s he was published by Grove Press alongside William S Burroughs of Naked Lunch fame and Kathy Acker, the pornographic feminist author of Blood and Guts in High School.

Cooper’s previous novel, Closer, portrayed gay teens taking drugs, having sex, and dying in grisly ways. This new one looked like it would be even more shocking. In his New York Times review, Edmund White, author of A Boy’s Own Story, compared Cooper favourably with the Marquis de Sade and Georges Bataille. “Cooper meditates ceaselessly on violence and perversion,” he wrote.

Frisk was bound to cause a stir, but provoking death threats was another thing. A couple of years earlier, Salman Rushdie annoyed the Ayatollah Khomeini enough with The Satanic Verses to have been the recipient of a fatwa, but death threats were sufficiently rare in the literary world in those days that people were inclined to take them seriously. One of the leaflets found its way to Cooper and he cancelled the book tour immediately. “I was really scared,” he later admitted.

Dubbed “the last literary outlaw in mainstream American fiction” by Bret Easton Ellis, Cooper is no stranger to these kinds of incidents – but unlike the author of American Psycho, he has rarely sought them out. Whatever Cooper’s reputation as a literary provocateur, more often than not he’s been the one on the receiving end of other people’s provocations.

In 1983, for instance, renowned American poets Ed Dorn and Tom Clark launched a vicious homophobic attack on him in their newspaper Rolling Stock. In recognition of his services to queer writing, they offered him their 2AIDS Award for Poetic Idiocy”. His prize? A beaker of infected blood, large and luridly illustrated on the page.

In 2006, Cooper discovered he’d been duped by one of the greatest literary hoaxes in a generation. JT Leroy, the transgressive young transgender writer he had mentored over the phone for years, who had bewitched celebrities like Carrie Fisher, Winona Ryder, and Lou Reed, was revealed to be a middle-aged mother of one named Laura Albert.

In 2016, without warning or justification Google deleted the blog Cooper had kept for over a decade, then stonewalled him as he tried to find out what had happened. They gave him back his blog’s data only after more than four thousand people petitioned the tech behemoth and journalists reported on the story in national newspapers.

Events like these have threatened to overshadow Cooper’s enormous achievements in literature and art – his vital contributions to postwar American culture reduced to a salacious soundbite. Many people know him only as the scandalous creator of shocking novels; a literary outlaw in the tradition of Burroughs and Jean Genet. My book WRONG: A Critical Biography of Dennis Cooper shows him in an entirely different light.

Drawing on almost 15 years of research into his life and work, in my study Cooper emerges in all his various incarnations: a literary pioneer, a radical anarchist, an attentive mentor, and, perhaps most shocking of all, a loyal and loving friend.

Cooper lives in Paris and, with a new novel coming out next year, he is as productive as ever. To get an accurate portrait of the artist as a young man – and an older man, I went there to interview him, his friends, and his collaborators. Then I headed to New York and sifted through boxes of letters, photos, manuscripts and diaries in his archive at New York University.

I also spent a lot of time at home in Cambridge thinking about his expansive oeuvre, which includes poetry, fiction, plays, films, and the first novel made out of GIFs. What were his biggest influences? How did his style change over the years – and why? What kind of politics is legible in – and in-between – his lines?

That’s not to say that I ignore the more controversial moments in Cooper’s career. A critical biography is a wonderfully malleable form that accommodates detail and anecdote as easily as scholarly discussion. It holds two kinds of writing in productive tension: the critical, which pursues an argument and often explores artworks on their own terms, and the biographical, which looks for character, chronology, stories – and controversies.

I’ve read too many biographies where a novel is only important insofar as it illustrates the author’s life. I’ve also read too many dry academic studies where the life seems to have no importance whatsoever. A critical biography seems to me to split the difference.

As it turns out, the group behind the “DENNIS COOPER MUST DIE!” death threat consisted of just one, quite young, and pretty stupid guy. When Cooper tracked him down, he confessed over the phone that he’d never even read Cooper’s work; the threat was based solely on rumours he’d heard.

If WRONG achieves nothing else, I hope it will encourage people to actually read (and re-read) Cooper’s books. His work is challenging and often macabre but, if you pay attention, it also shows us how to live ethically, love passionately, and make uncompromising art in a corrupt world.

WRONG: A Critical Biography of Dennis Cooper by Diarmuid Hester is published by the University of Iowa Press