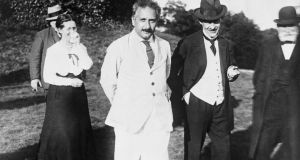 Albert Einstein in Potsdam, Germany in 1922, the year he won the Nobel Prize in Physics and travelled to the Far East with his wife. Photograph: Getty Images

In 1922, the same year he received the Nobel Prize in Physics, Albert Einstein set out with his wife Elsa on a 5½-month odyssey of discovery of a new world: the Far East and Middle East.

Along the way, he was feted by a Japanese empress and had an audience with the king of Spain. He also kept a travel diary, noting in stark, often racist terms his impressions of the people he encountered on stops in Hong Kong and Singapore, China, Japan, India and Palestine.

The personal writings do not only reveal the musings of a man grappling with a jolt to his view of the world. According to Princeton University Press, which has published the first full English-language edition, they also expose “Einstein’s stereotyping of members of various nations and raise questions about his attitudes on race”.

The first volume of the trove – previously available in German but now available under the English title The Travel Diaries of Albert Einstein – complicates the portrait of a man often described as the most brilliant physicist of the modern era.

Einstein was a German-born Jewish scientist who was targeted by the Nazis and became known as an advocate for human rights. He once said in an interview: “Being a Jew myself, perhaps I can understand and empathise with how black people feel as victims of discrimination.”

But in his private writings on that journey from October 1922 to March 1923, “other peoples are portrayed as being biologically inferior, a clear hallmark of racism”, according to Ze’ev Rosenkranz, assistant director of the Einstein Papers Project at the California Institute of Technology and the editor of the book.

“I think a lot of comments strike us as pretty unpleasant – what he says about the Chinese in particular,” Rosenkranz told the Guardian. “They’re kind of in contrast to the public image of the great humanitarian icon. I think it’s quite a shock to read those and contrast them with his more public statements. They’re more off guard; he didn’t intend them for publication.”

When Einstein set out on his journey, he was in his 40s, already renowned for his work on the photoelectric effect and on relativity, and developing a second reputation as a progressive public figure. The travel diaries, however, lay bare a different side of a remarkable mind.

– He expresses sympathy for the “stricken people, men and women, who beat stones daily and must heave them for 5 cents a day”. He adds: “The Chinese are severely punished for the fecundity by the insensitive economic machine.”

– He quotes Portuguese teachers who said “the Chinese are incapable of being trained to think logically and that they specifically have no talent for mathematics”, adding: “I noticed how little difference there is between men and women; I don’t understand what kind of fatal attraction Chinese women possess which enthralls the corresponding men to such an extent that they are incapable of defending themselves against the formidable blessing of offspring.”

– “Chinese don’t sit on benches while eating but squat like Europeans do when they relieve themselves out in the leafy woods. All this occurs quietly and demurely. Even the children are spiritless and look obtuse.”

– “It would be a pity if these Chinese supplant all other races. For the likes of us, the mere thought is unspeakably dreary.”

– A Chinese funeral is described as “barbaric for our taste,” the streets “swarming with pedestrians”.

– “In the air there is a stench of never-ending manifold variety.”

– “Even those reduced to working like horses never give the impression of conscious suffering. A peculiar herd-like nation,” he writes, “often more like automatons than people”.

– “Pure souls as nowhere else among people. One has to love and admire this country.”

– “Intellectual needs of this nation seem to be weaker than their artistic ones – natural disposition?”

– Visiting the British colony that later became Sri Lanka, Einstein writes that the residents of Colombo “live in great filth and considerable stench at ground level”, adding that they “do little, and need little. The simple economic cycle of life.”

While many may insist on dismissing the diary entries as merely reflecting the attitudes of the era, Rosenkranz told the Guardian, the xenophobia and prejudice they revealed had been far from universal.

“That’s usually the reaction I get: ‘We have to understand, he was of the zeitgeist, part of the time,’” he said. “But I think I tried here and there to give a broader context. There were other views out there, more tolerant views.”

In China, however, many social media users seemed willing to give Einstein the benefit of the doubt, or even to agree with him.

“That was the impression China gave to the world back then,” wrote one user on Weibo, a Twitter-like social network. “If it were now, Einstein wouldn’t say such things.”

“After you snoop in someone’s diary, you’re blaming them for not liking you,” another Weibo user wrote.

A few did push back. “With what you’re saying, you’re acknowledging Einstein’s racism toward the Chinese and making excuses for him,” one person wrote in a blog post.

If anything, Einstein’s travel diaries add an unexpected twist to the legacy of man who, in no uncertain terms, evolved.

For instance, when his 11-year first marriage – to a fellow scientist, Mileva Maric – was failing, he crafted a misogynist manifesto in an apparent belief that it would help save the union, according to Einstein: His Life and Universe, by Walter Isaacson.

Einstein demanded, among other things, that she keep his rooms tidy, bring him three meals a day and stop talking when he requested – with no expectations that he would return the favour. A few months later, she left him; they divorced in 1919.

Einstein’s shifting views may be most powerfully illustrated by the way he put his scientific fame at the service of the American civil rights movement.

According to Smithsonian Magazine, in 1931 he joined a committee to protest the injustice of the Scottsboro Boys trial in Alabama, in which nine African-American youths were falsely accused of raping two white women.

And in a 1946 commencement speech at Lincoln University in Pennsylvania, he declared: “There is separation of coloured people from white people in the United States. It is a disease of white people. I do not intend to be quiet about it.”