A lesson from history: Italy’s Roma register, the Jews and the church 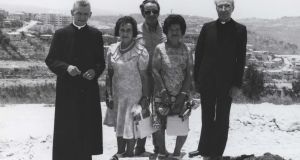 Proposals by the politician Matteo Salvini to conduct a census to create a register of Roma people in Italy reminds one of events that took place in many parts of Europe during the second World War. It led to terrible tragedy, especially to those among the Jewish community, and it understandably stirs up very uncomfortable feelings for people who choose to remember that era.

The last time registers were kept and acted upon in Italy, the Pope and others in authority looked the other way but countless acts of untold individual heroism by local church leaders were carried out. They provided some vestige of hope during that awful period of European history. It would be reassuring if these lessons could be remembered. What happened then is also a story that deserves re-telling, not least as an example of how humanity and faith can still shine through during times of such adversity.

Whilst writing my novel, The Indomitable Chiesa di Santa Maria, a fictional history of a Florentine Renaissance church from its construction to the present day, my research led me to an area that has been relatively ignored in recent historiography. Apart from Roberto Begnini’s Oscar-winning film Life is Beautiful, and Giorgio Bassini’s extraordinary novel, The Garden of the Finzi Continis, the plight of the Italian Jews during the German Occupation does not feature much in the public eye. And yet the heroism displayed by some members of the Catholic Church, particularly in Florence, during that terrible period is worthy of much greater recognition.

There were no more than 50,000 Jews living in Italy before the outset of the war. The anti-Semitic decrees introduced by Mussolini in November 1938 meant that Jews were barred from both the military and civil service; from state employment and from owning their own businesses. They were excluded from practicing as doctors, lawyers, accountants, teachers or even as journalists. They were forbidden from owning real estate in excess of 20,000 lira and agricultural property of more than 5,000 lira. These laws were given added weight by the social legislation introduced at the same time, which included banning Jews marrying Italians. Most sinister of all was the compulsory registration, which later bared its teeth when the Germans took over and orchestrated their grotesque round-ups. This Italian anti-Jewish code was not a mild one in any sense.

By 1941 there were 43,000 Jews (almost 4,000 of whom were foreign) remaining in Italy. A revealing guide to the zeitgeist comes from the hidden diary of Galeazzo Ciano, the Italian foreign minister and Mussolini’s son-in-law. His diary reveals the intense German pressure associated with the enactment of these laws. He was furious with his German allies over the flood of Jewish immigrants crossing Italy’s borders from German-occupied territories. He told Il Duce that he favoured a solution, which will not raise a problem that did not exist there! And yet a more pertinent reason why the Italian operation against the Jews didn’t get off the ground was that, as Raul Hilberg says, they were not the ideal victims here. The persecution was psychologically as well as administratively difficult. The Jews were totally absorbed and assimilated into Italian life. Almost 25 per cent were either in the military and civil service. Not only were they officers in the army, but they held the highest positions in government.

Before the occupation in July 1943, the German frustration at the lack of progress in Jewish deportations was at breaking point. A familiar story begins to unwind in every Italian city. But what is less familiar in Italy is the charitable response from the Catholic Church in saving Jews, which was greater here than in any other country under German occupation. There are countless stories of heroism, including the life-saving work of Pere Marie Benoit and of Monsignor Hugh O’Flaherty in Rome, where the Pope remained silent.

However, it is in Florence where the clergy really came into its own. Under the direction of Archbishop Elia Dalla Costa, an orchestrated operation was developed throughout the area. He instructed his secretary Monsignor Giacomo Meneghello to link up with the now illegal agency the Delasem (Delegation for assistance of emigrant Jews). He also approached Fr Cipriano Ricotti as well as Fr Leto Casini for help.

According to the Yad Vashem site Dalla Costa asked Ricotti: ‘Do you believe that you will be able to dedicate yourself to the rescue of Jews?’ Ricotti confirmed that he would, and was then given a letter from the Archbishop to send to all the monasteries and convents in Florence and its surrounding area, to open the gates of their institutions to Jews. Ricotti said that this was absolutely crucial in saving thousands of Jewish lives.

In Mordechai Paldeil’s book, Churches and the Holocaust, he describes Dalla Costa summoning Leto Casini to his palace, asking the latter to find homes, obtain food supplies and provide identity cards for ‘those persecuted people’. Casini agreed to do everything he could. His work led him to be arrested when caught along with the Chief Rabbi of Florence, Nathan Cassuto. Dalla Costa managed to have him freed, but Cassuto was tragically sent to Auschwitz.

Ricotti and Casini were helped by a number of heroic clerics including Giovanni Simeoni, Angelo Della Torre and Giuseppe Zotti, each of them saving countless Jewish lives. A particularly moving story was of yet another cleric, the ailing 60-year-old Giulio Gradassi who was a local parish priest. He sheltered an immigrant family, and at one stage had to cycle in the middle of a rainy night, whilst suffering from tuberculosis, in order to find more space for them. His devotion to their wellbeing was exemplified by him baking matzos during Passover, knowing that the family were observant Jews.

A number of convents also housed many victims. Outstanding lifesaving work was carried out by a number of exceptional nuns. On the Yad Vashem site, the story of how Mother Sandra Busnelli turned her convent into a safe haven for Jews is retold. When the convent was raided, Mother Busnelli was arrested, but thanks again to Dalla Costa, she was released. A similar story is told on the same site of Mother Marta Folcia, who learnt Hebrew in order to be able to bless her escapees. She managed to hide some children until the end of the war, finally giving them up to a Jewish brigade with whom their lives were saved.

The story of how the Catholic Church saved so many Jews in Florence both features in my novel and is borne out by the facts. Out of the 3,000 Jews living in Florence only 243 were deported. The names of Dalla Costa, Ricotti Casini, Meneghello, Simeoni, Della Torre, Zotti, Gradassi, Busnelli and Folcia are all found on the list of the Righteous Among Nations at Yad Vashem. This is the highest honour that Israel bestows on Gentiles for saving Jews during the war. The work of the clergy in Florence stands, however, in stark contrast to that of their Pope, Pius XI, who said and did very little.

This time round – before something truly awful befalls the Roma people – we all need to voice our concerns and opposition, as well as demand leadership from our politicians, religious and community leaders alike.
The Indomitable Chiesa di Santa Maria by Daniel Peltz is available now