Teenage Kicks and a Troubles town: ‘The vision of Alternative Ulster was self-realising’ 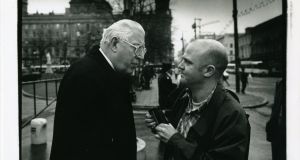 I was in the Harp Bar on Hill Street when the police raided it. It was December 1978 and maybe 30 Belfast punks were in the back room downstairs. John Perfect was performing with The Basics. His hair was razored like Sid Vicious and like many of the Harp clientele, the singer was handy with his fists. He had caused a rumpus earlier in the year when he was party to fake rumours of his death. A tribute night had been set at the Harp to mark his passing, but instead, John Perfect came roaring out of the toilets in the best of health. He did it his way.

But when the Royal Ulster Constabulary arrived at the Harp Bar, we deferred to the management. Hill Street was a ruinous place back then, badly lit, packed with old bonded warehouses and edgy with 10 years of conflict.

Two people had been killed in the bar during a sub-machine gun attack by Protestant paramilitaries in 1975. So the frontage was protected by scaffolding and chicken wire, security cameras and a row of oil drums, loaded with concrete. We were alerted to the arrival of the RUC and so our assembly of under-age drinkers was ordered to be quiet. On the far side of the door, the staff was stacking up beer crates, hiding our existence from the law.

Just another episode in the most dangerous city in western Europe.

There were moments when I cheered to myself, recalling the times when music had been clear-minded, angry and conscientious - Stuart Bailie

The Harp Bar was shared by Divis hoods, the Official IRA plus a rota of strippers, flown in from Birmingham every Saturday. It was on the outside edge of the security zone, the fabled ring of steel, so the bar was able to function when the city was locked down in the evening. And from April 1978 onwards, the punks took umbrage there.

The upstairs room hosted Rudi, Stiff Little Fingers, the Undertones, the Fall, the Outcasts and dozens of awful contenders like my own band, Acme Music. It became our social club and it created a spiky consensus, above the sectarian lines of Northern Ireland.

This was the year of Alternative Ulster by Stiff Little Fingers, a new declaration of rights, delivered on a seven-inch single. We became self-aware. Our heads were liberated.

Forty years later and I’ve published a book called Trouble Songs. It aims to tell the story of music and conflict in Northern Ireland. It starts in July 1968 and the first use of We Shall Overcome as a protest song in the north. It remembers how musicians endured and reacted to internment, Bloody Sunday, the Abercorn Bombing and the revolting murder of three members of the Miami Showband in 1975.

Writing the book has been an upsetting passage, returning to stories that I dimly remembered or had wilfully erased. Still, there were moments when I cheered to myself, recalling the times when music had been clear-minded, angry and conscientious.

I absolutely believe that punk rock helped to provoke the peace process. And by the time that Bono facilitated the handshake between John Hume and David Trimble at the Waterfront Hall in Belfast in 1998, the vision of Alternative Ulster had become self-realising.

Whenever I meet old punks from the Harp Bar, we trade news about births, deaths and misdemeanours

In the course of this research I have spoken to more than 60 people, including Christy Moore, Blindboy Boatclub, the Miami Showband survivors and Terri Hooley, who founded a record label in 1978 called Good Vibrations and put out Teenage Kicks by the Undertones. Even now it seems like a miraculous event. Elsewhere, I’ve come across a surplus of nasty, gloating songs about the conflict, but transcendent tunes like Belfast by Orbital tell the best story.

Whenever I meet old punks from the Harp Bar, we trade news about births, deaths and misdemeanours. There’s a style and a composure with these people that has survived 40 years. City Council put up a plaque at the site of the former venue, but Hill Street is now a gentrified parade of banal bars with lazy names and graceless drinkers.

We take consolation that our youth was fortified on essential, life-changing stuff. Trouble Songs gave us deliverance.