‘I think the Irish are Spaniards who got lost’ 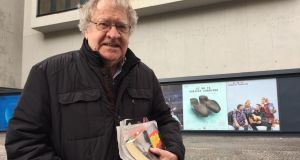 Ian Gibson: ‘I didn’t want to die without revising the book, it was a moral obligation’

Ian Gibson has spent the last four decades living and working in Spain, so it’s rather ironic that as he sits down in a bar in central Madrid with The Irish Times, the icy drizzle outside is more reminiscent of his native Dublin than his adopted home.

A few days earlier, the writer had attended an event in the capital which highlighted the cultural ties that bind Spain and Ireland: Loco por Lorca (Crazy about Lorca), a celebration of the 120th anniversary of the birth of poet Federico García Lorca, with funding from the Arts Council of Ireland, support from the Irish Embassy and performances by Spanish and Irish musicians.

“I think the Irish are Spaniards who got lost,” Gibson told one Spanish newspaper recently and he roars with laughter as he is reminded of the quote, even though he stands by it.

Now 78, he is energetic, warm company and his cosmopolitan intellect is apparent as he peppers his speech with Spanish phrases whose English translation escapes him, along with the occasional Italian aphorism and French book title.

“I’m still a Dubliner, obviously, and I’m Irish, but because I’ve got Spanish nationality, this enables me to speak with the freedom that other Hispanists perhaps can’t,” he says. Gibson has been a Spanish citizen since 1984. “I can say what I want because I pay my taxes here,” he adds.

That freedom to speak and write his mind about cultural and political issues has made him a well-known public figure in Spain. But Gibson is known above all for his work on Lorca, the multi-talented genius who was Spain’s greatest poet of the 20th century and its most famous casualty of the country’s civil war.

The build-up to Lorca’s 1936 murder by supporters of dictator-to-be Francisco Franco near the southern city of Granada was the subject of Gibson’s painstakingly researched first book, El Asesinato de García Lorca (The Assassination of García Lorca), originally published in France in 1971 due to the strict censorship in place in Spain at the time.

By 1975, with Franco dead and his début a success, Spain was beckoning for Gibson, who had taught at Queen’s University in Belfast and then in London. He and his family made the move, allowing him to write a full biography of Lorca, which is still seen as the definitive account. He has remained in the country ever since, based mainly in Madrid, but for a time in a small town in Andalusia.

More biographies – of Salvador Dalí, Antonio Machado and Luis Buñuel – followed, along with other non-fiction and fiction, mostly written in Spanish. But it is Lorca who is most closely associated with the Irishman – and who continues to haunt him.

“He reaches into the very depths of my soul,” Gibson says. “And I knew that when I came across my very first poem of his.”

That encounter took place when Gibson, a teenager from a Methodist family, was in a Dublin bookshop when he happened upon a copy of Lorca’s Gypsy Ballads, the opening lines of which he recites, in Spanish, from memory: “The moon came into the forge / With her bustle of nards. / The little boy stares and stares at her / The boy keeps staring at the moon…”

“I’m still fascinated by that poem. How do you explain that?” asks Gibson, who partly answers his own question by pointing to the earthy, “telluric” quality of Lorca’s verse, which he says was also in much of the Irish literature he read as a young man.

“When you’re 18 and interested in literature and trying to find your way, suddenly you come across a poem which can sort of change you, change the direction of your life. And I can see now that’s what happened to me.”

Sixty years later, Gibson’s professional relationship with the Andalusian poet appears, finally, to have come to an end, with the publication in April this year of an expanded and updated edition of his first book.

“You’ve no idea the relief I’m feeling having done this,” he says. “Here I am in 2018, coming up to 80, it’s horrifying to think how many years I have invested in all of this. I didn’t want to die without revising the book, it was a moral obligation.”

But while Gibson’s exhaustive work is done, the hunt for Lorca – or his remains, at least – continues. Efforts to find the poet’s body, believed to lie in an unmarked grave alongside three other men murdered with him on the outskirts of Granada, have so far been unsuccessful. However, recently investigators have expressed renewed hope that the bodies lie in a spot near the one first identified by Gibson.

Lorca is just one of more than 100,000 victims of Franco from the civil war and its aftermath who are believed to lie in unmarked graves. Spain’s failure to give them and one of its greatest cultural figures a decent burial clearly riles Gibson, who accuses the country of “behaving disgracefully with regard to its dead”.

The conservative Popular Party (PP) of prime minister Mariano Rajoy has resisted efforts to deal with the legacy of the Franco era. The government also eliminated state funding for a civil organisation dedicated to finding mass graves and identifying victims.

“Any normal human being understands that if you’ve got a grandfather out there who’s been shot and buried [in a mass grave] you’d want to recover the bones of your grandfather and give him a decent burial, for God’s sake,” Gibson says. “The ancient Greeks knew that, everybody knows that. But apparently [the Spanish right] doesn’t.”

Spaniards are famously sensitive to outsiders’ views of their country and such outspokenness raises hackles among certain sections of society. The right-wing revisionist historian Pío Moa has labelled the Irishman “a sower of hatred”. By contrast, leftist newspaper El Diario praised Gibson as “a Don Quixote tilting at forgetfulness” and he is part of an illustrious line of Irish, British and American writers – including Gerald Brenan, Hugh Thomas, Gabriel Jackson and Paul Preston – who have skilfully explained Spain not just to the outside world, but to the country itself.

Gibson’s enormous affection for Spain is evident, as is his frustration at the country’s recent problems which have followed those years of modernisation when it became a major partner in the European Union.

“This country could be a paradise on earth, it’s got absolutely everything in its favour,” he says with a sigh as he contemplates the ongoing Catalan crisis and the torrent of corruption tainting the political class. “If they could only see that and talk and listen more. Spaniards are very bad at listening.”

With Lorca now behind him, Gibson’s restlessness is evident as he looks ahead to new challenges, which include rereading Proust and Balzac in French.