‘I am in need of music’: reflections on music and poetry in The Well Review

Plath’s ‘black keys’ metaphorically twin piano and typewriter, the musician and the writer 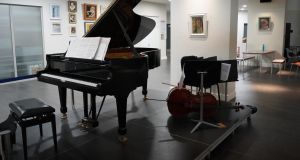 “I don’t want poetry and music to be life’s understudies or background singers to the humdrum, which might be losing both its hum and its drum anyway.” Photographs: Linda Ibbotson

I crave sound. I grew up in a soundful house and I can’t abide a silent one. I’m accustomed to creaking stairs, doors left ajar and music coming from other rooms. I was raised in a semi-detached house and our next-door neighbours practiced their accordions before sunrise.

My family home issues an incessant click. This environment ushered me towards my two greatest passions: music and poetry, both of which I started to take seriously when I was 12. These twin devotions happily coincided with my prodigious awkwardness and the resulting aversion to being involved in any physical activity outside of turning pages and practicing scales.

I had a chronic case of “looking out the window” syndrome at school. This can be unbeneficial, if not dangerous, in field sports, which have no windows. I was also a prolific note-passer (usually jokes and poems) and chatterbox, which meant the verbs that I usually heard from teachers after the word, “stop”, were looking, speaking, writing, singing and on my more eccentric days, dancing. I used to store CDs and tapes in the nook under the bookshelves in my own bedroom. It never seemed right to create too much physical space between the two.

I previously worked in the mental health and criminal justice fields and I thought and still reflect a lot on the verbal world, especially offline in the realms of gesture and reciprocity.

In institutions such as prisons, courthouses and psychiatric hospitals, it’s difficult to find original things to say and to simply tell the truth. One of the reasons for this is because you are working with individuals who have or will have a different relationship to time than you; for them, it will either be taken away, rearranged or returned with conditions attached. We all experience this to some degree, but it’s felt acutely by the people who must live in these environments.

Poetry and music, when they excel, are opportunities to speak and listen in different languages and timezones than our everyday ones. I believe that’s why they hold great power in such settings too. I love them both because they also eschew the hyper-transactional relationships we have with human beings in more traditional contexts like work and family life. Outside of paying for concerts and readings, I can’t really give like for like, not in the same volume, merit and time frame. I can’t give music back to music and the same with poetry. But I can think about its placement in my life, how I value it and how I might create spaces for the temporary cohabitation of both words and sounds.

In his poem, Ars Poetica, Verlaine impels us: “Music first and foremost!” and in Issue Three of The Well Review, I want the gap between music and poetry to be as narrow as possible so that the reader will feel as if the genres are housed in the same cabinet. And that the result, ie the physical journal, will be placed in such a space. I’m anxious about how we will fill these physical spaces in our houses in the future and how these objects might disappear from our daily vision as music is largely digitised and most people read content online.

I don’t agree with Marie Kondo on minimising one’s book collection; I will always opt for the maximal library. I want orchestras, choirs and soloists on my bookshelf – I can decide the volume and frequency of each voice. Perhaps the estrangement between these two disciplines will inevitably intensify but I wish for them to remain siblings in the same home, to borrow from the poet, Stephane Mallarmé, who imagined the two as sisters. Mallarmé spent much his life patterning his work to connect words to music. He described reading as “a lonely quiet concert in our minds” that demands all of our mental faculties. But haven’t we grown a bit fearful of loneliness? We’ve become less acoustic beings and are plugged in on so many levels to so many outlets. Our phones substitute these lonely recitals by filling our minds with copious indiscernible sounds that are of varying quality.

The one poet I would have never associated with sound and music is Sylvia Plath. I knew of Elizabeth Bishop’s desire to be a composer and how performance anxiety compelled her to switch from music to English during her studies at Vassar College. But Plath? She was all thick, quick thoughts, her movement like David Foster Wallace’s description of bees in Forever Overhead – “bees have to move very fast to stay still”. I felt I could never quite catch up with Plath’s intentions.

The original choice to republish her radio play, Three Women, was not mine although Winter Trees, the collection it features in, has sat on my bedroom bookshelf since the ’90s. I used to dawdle on the poem, Love Letter, and maybe if I had travelled further into the book, I’d have educated myself on Plath’s capacity for acoustics and her vocal range. It was the suggestion of the cellist, Sonia Wieder-Atherton, to speak in our interview in Issue Three about Plath’s Three Women, as she had incorporated it in a project called Night Dances that she produced with the actress, Charlotte Rampling. Rampling read a selection of Plath’s work interlaced with Wieder-Atherton’s performance of Benjamin Britten’s cello suites.

I began to unlearn and relearn one of my favourite poets through this encounter with Wieder-Atherton. Plath’s Three Women contains the lines “Is it so difficult/for the spirits to conceive a face, a mouth? The letters proceed from these black keys…” The mention of “black keys” metaphorically twins the piano and the typewriter – the musician and the writer.

This radio play is set in a maternity ward, plump with references to birth and death, and sound, of course. Shrieks, high heels, mouths, black keys are just some of the composites that make up the soundtrack. This play clicks and clacks and the three voices clot to become a singular one before separating again. There are many references to the anatomy of the mouth in this poem, less so the ears – at times we are left to imagine the verbal sounds that would be exerted in such a setting.

Instead of quoting extracts from Three Women in the interview with Wieder-Atherton, I decided to publish it in its full form; to give it a music room even though our house is small. How does one build a structure around Plath? Every poem in this issue, I hope, has multiple sounds and resonances as well as its own internal rhythm. My editorial for Issue Three is a rest notation in music. When I finished editing our current issue, I craved a break for my ears, eyes and hands.

The closing essay is by Brian Turner and he sounds his way through the birth of the acoustic era, and the death of his wife, the poet, Ilyse Kusnetz. It’s surely no coincidence that one of the first soundmen was a wordman – Édouard Léon Scott de Martinville worked as a printer and bookseller before inventing sound recording.

Turner also refers to the wax cylinder recording of Walt Whitman reading America and he assists us in eloping with time in time. For Turner, the artefacts of music such as the phonoautograph and the digital recording of his wife’s vocals have all been sustained in a single chord composed of voice, mind and body.

I don’t want poetry and music to be life’s understudies or background singers to the humdrum, which might be losing both its hum and its drum anyway. For me, music and poetry need not duplicate life and I resist requests for poetry and music to “do things”, but I also wish to partake in creating meaningful connections and living patterns whilst also recognising the paradoxes in such ambitions. I know there are many listeners and readers out there. I hope that some will read and listen to this issue and say in their minds or aloud, can you hear that? It sounds just like...
The Well Review Issue Three is on sale now. The Dublin launch will take place on June 6th at Poetry Ireland and will feature a reading by Issue Three contributor Paul Muldoon and a selection of contributors from Issues One, Two and Three. Editor Sarah Byrne, will teach a three-day workshop on poetry, music and performance at The Allihies Inspires Festival in July 2019.
thewellreview.com
allihiesinspires.org