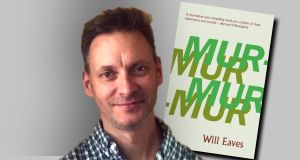 Author Will Eaves, winner of the 2019 Wellcome Book Prize for Murmur, his novel inspired by the story of Alan Turing

Novelist Will Eaves has won the 2019 Wellcome Book Prize for Murmur, a novel which judges described as a “future classic”, and inspired by the legacy of Enigma code breaking mathematician Alan Turing and the devastating period before his death. Eaves was warded £30,000 for his fifth novel, published by CB Editions.

Author and judging chair Elif Shafak praised the 51-year-old London writer’s “exquisite craft” in writing a novel of such power it “restores our faith in human beings, and their endless capacity for resilience”. He said “Will Eaves has given us a future classic”.

Taking six years to write, Murmur – only the third novel to win the prize – was inspired by Eaves’s time at King’s College Cambridge studying in the Turing Room, and the insight into how pain impacts identity, gained from his own experience of a chronic spinal condition.

Through Alec Pryor – the book’s avatar for Turing – Eaves fictionalises the arrest, legally-enforced chemical castration and harrowing end of Turing, exploring consciousness, love, homophobia, identity and the implications of artificial intelligence. Pryor/Turing responds to intolerable physical and mental stress with love, honour and a rigorous, unsentimental curiosity about how we perceive ourselves and the world.

The winner was announced at a ceremony on Wednesday at Wellcome Collection, London, marking the 10th anniversary of the literary prize celebrating art and science – a topic much in vogue this week, the 500-year anniversary of the death of Leonardo da Vinci. The Wellcome Prize rewards the best new fiction and non-fiction books illuminating the ways health and medicine touch our lives.

Reviewing the novel in the Irish Times, Houman Barekat said Eaves’s prose was “exceptionally poised and elegant”. He said “ Murmur is a poignant meditation on the irrepressible complexity of human nature and sexuality, and a powerful indictment of the cowardice and groupthink that sustain state-sanctioned barbarism. It also poses timely questions about the digital world Turing’s pioneering work helped bring about, as Alec ponders the ‘welter of connectedness, the phones and messages, commuters trailing wires, staring past bodies into space, the sound-image of ghostly callers in your head wherever you may be, whatever time it is’.”

Eaves was selected from a shortlist of six, including Amateur: A reckoning with gender, identity and masculinity by Thomas Page McBee; Heart: A history by Sandeep Jauhar; Mind on Fire: A memoir of madness and recovery by Arnold Thomas Fanning; My Year of Rest and Relaxation by Ottessa Moshfegh; and The Trauma Cleaner: One woman’s extraordinary life in death, decay and disaster by Sarah Krasnostein.

Originally a short story, Murmur’s publisher CB Editions is an independent small press run by Charles Boyle, releasing just a handful of books each year. The novel was shortlisted for the 2017 BBC National Short Story Award, nominated for the 2018 Goldsmiths Prize, 2019 James Tait Black Prize and 2019 Rathbones Folio Prize, and in March was awarded the 2019 Republic of Consciousness Prize for small presses (jointly with Alex Pheby’s Lucia, a novel about James Joyce’s troubled daughter Lucia published by Galley Beggar Press).

Speaking for the judging panel, Shafak said “Murmur is a hugely impressive book that will grip you in the very first pages, break your heart halfway through, and in the end, strangely, unexpectedly, restore your faith in human beings, and their endless capacity for resilience. By the time you finish the book you might fall in love with not only the story and the storytelling, but with the exquisite craft behind it. Every sentence, each character… is well-thought, beautifully written and yet there is a quiet modesty all the way through that is impossible not to admire. Whether he intended this or not, Will Eaves has given us a future classic and for this, we are grateful to him.”

Francesca Barrie, commissioning editor at Wellcome Collection and Wellcome Book Prize manager, said: “Out of the record number of submissions received for the 10th anniversary year, we are thrilled that the judging panel has chosen Will Eaves’ exceptional novel as a very worthy winner. Murmur is a novel of both literary excellence and social importance, offering powerful insights into consciousness, identity, and what it is to be human in a machine age.”