New book by Sorcha Pollak launched in Dublin on Wednesday 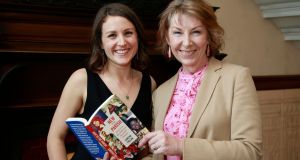 Irish Times journalist Sorcha Pollak with RTÉ broadcaster Aine Lawlor at the launch of her book New to the Parish: Stories of Love War and Adventure from Ireland’s Immigrants. Photograph: Nick Bradshaw

A new book by Irish Times journalist Sorcha Pollak shows “how the world changes around us”, RTÉ broadcaster Aine Lawlor has said at its launch.

The event at Poetry Ireland on Parnell Square in Dublin marked the publication of New to the Parish: Stories of Love War and Adventure from Ireland’s Immigrants.

The book is based on a weekly series in The Irish Times which features the stories of immigrants who moved to Ireland.

“By telling people’s stories, she is telling us more than the clever analysis we see on the news pages . . . she is showing us how the world changes around us,” Lawlor said, adding it was a “marvellous book”.

At the event, attendees heard from George Labbad, a Syrian refugee who spoke about how his parents lost the restaurant they had spent 30 years building when hostilities broke out in Aleppo.

His is one of 14 stories featured in the book.

Other speakers included a couple who moved to the Republic from the United Kingdom following the result of the Brexit referendum.