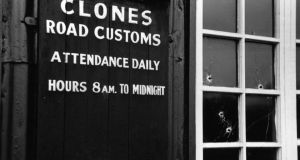 The Clones Road customs post in 1956: the town was one of the biggest losers in Ireland’s partition. Photograph: Charles Hewitt/Picture Post/Getty Images

Book Title:
Hard Border: Walking through a Century of Partition

Ireland’s Border is getting a lot of attention. This quiet corridor of fields, streams and bogs is vital in shaping the way the UK makes its exit from the EU. In Ireland, potential impact on the Border was a subject of worry before the vote happened but it took months for the realisation to hit Westminster. Discussion often frames the Border and its people as forgotten, ignored, voiceless. “We’re in the backseat of a rollercoaster,” one Border resident told the BBC lately. Now voices are emerging, although it is unclear if these frontline reports reach the right people. There have been books, many documentaries, reams of journalism and the Border even has its own Twitter platform with 18,000 followers.

Darach MacDonald’s new book Hard Border is a fine addition to the discussion and will likely outlast most contributions as it is primarily an historical tour, giving a lot attention to the 1920s and the Troubles. It puts Brexit in context. To write it MacDonald walked the 50-mile route of the now dried-up Ulster Canal. This waterway once linked Lough Neagh to the Erne system but was unsuccessful and closed in 1932, beaten by the railway and partition. It is a route that is only sometimes on the borderline but is certainly borderland and spends roughly equal time each side of the line. I think it is an appropriate place to discuss partition for another reason: the abandoned canal is a monument to big plans that didn’t work out, imbued with the sense of economic decline that clung to much of Ireland’s Border.

Now there is talk of restoring the locks and reflooding the canal. This would be a wonderful link across the island, meaning you could boat from Waterford to Belfast. So Hard Border is a guided tour along a route that once was and may be again. In the meantime, MacDonald sticks the canal route as much possible and when he can’t he makes do with walking the nearest road. It can be pleasing to use Google’s street view to illustrate the book. MacDonald marks his progress clearly, often naming townlands or route numbers. Unfortunately it would not be so easy to create your own index and none is supplied; Hard Border deserves one.

MacDonald gets fascinating stories from court records and trawling newspaper archives. He draws together much detail on an episode from just before partition, a 1920 boycott of Belfast businesses that found most adherents in Monaghan. Whatever the intention, the boycott appeared to be a sectarian action and lead to intimidation and attacks on Protestant-owned businesses. The important role of Protestant traders in the town was shaken and many moved north across the soon-to-be Border.

MacDonald is anxious about the potential damage of Brexit, indeed these fears are the reason for examining the Border’s history now, but this boycott shows sectarian attitudes are the real enemy, more dangerous than any customs post. MacDonald comments that the final cost of the boycott was the “psychological separation of Monaghan from its traditional and natural centre, even before customs tariffs were imposed”. However, MacDonald might say, and I would agree, that a re-hardened Border may help reawaken sectarianism – the dangers are interlinked.

MacDonald also opens up the sometimes violent few years between the provisional agreement of partition and the solidification of the frontier. It was an uncertain time, rather like today. Some Brexiteers dismiss responsibility for Ireland’s Border by saying is it the EU, not the UK, who will put customs posts in place. Likewise in 1923 James Craig, Northern Ireland’s first prime minister, told Belfast business people that, “partition was nothing; there was no such thing as partition if they [Dublin] did not erect a customs barrier between North and South.” This was exactly what Dublin went on to do, putting the new northern state firmly inside a British customs union. It seems tapping the Border as a revenue stream was irresistible to the Dublin government, even though it had the effect of strengthening partition. “Craig could hardly believe his luck,” says MacDonald.

Hard Border deals mostly with politics and conflict centring on familiar belligerents. Many pages feature the IRA or another armed acronym, the Orange Order, the B-Specials or political parties. I was just as interested in other stories that MacDonald’s trek unearths. I had never heard of the 1919 strike at Monaghan Lunatic Asylum. The staff and inmates took over the building, hoisted a red flag over the roof and declared it a Soviet. This was under the leadership of the revolutionary socialist and writer Peadar O’Donnell, union organiser in the town at the time. They won improvement to their conditions and held a celebratory dance.

MacDonald is from Clones and still lives near the Border. Years of personal experience and a career in journalism bolsters the research. It is always very engaging when historical narratives arrive within the reach of MacDonald’s personal recall. He devotes a couple of pages to the Leslies of Glaslough, a family no Border writer can resist. MacDonald crashed one of their parties when he was 20. “That bacchanalian event left a lasting impression on my ideas of what the gentry did when we weren’t looking. Indeed, the Leslies tended to do it when we were looking.”

The chapter on his hometown is a particularly fine blend of history and memoir. Clones was one of the biggest losers in Ireland’s partition, the abandonment of the Ulster Canal just one aspect of its isolation. MacDonald fears all the positives brought to Clones by the open Border will soon be taken away. “The town and its people now hang by a thread under the threat of Brexit.” It is a concern that easily extends to the whole borderland.