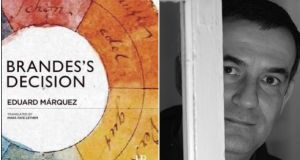 An artist recalls the father who taught him how to see the magic in the ordinary reports Eileen Battersby in a subtle, sophisticated newly-translated Catalan novel of intense beauty.

Brandes is a painter; he has known sorrow in his life. There was the early death of a mother he barely remembers, the terror he experienced at the Somme and eventually, the unhappy marriage which also cost him his son.

Now Brandes, about to tell his story, is dying and more than ever, is at the mercy of his memories, which even at their bleakest are undercut by the defining presence of his father who ultimately emerges as the person who not only showed him how to look at the world but also to feel deeply.

Many of the most moving observations articulated by the narrator are when he is thinking about his lonely father, a man with a broken heart and most obviously an understanding of what really matters in the making of a human intelligence. For Brandes it is vital, his only glimpses of innocence in a Europe later destroyed by two world wars linger in the things his father once told him.

“My father often talked about the soul of colours, about their ability to influence our feelings. He was a chemist, but his fondness for painting compelled him to study pigments. And he could turn dry terms like lazurite, aluminium silicate, or sulphur into fascinating stories, like Marco Polo’s trip to the lapis lazuli quarries in Badakhshan at the mouth of the Amu Darya river, or magical tales, like the legend of he dragon blood that transformed into cinnabar . . . Other nights, thanks to my father’s skill as a storyteller, I had no trouble imagining the dragon patiently waiting up in a tree to leap on its eternal enemy; then its fierce battle with an elephant . . . ”

Brandes admits his most fond memories are of sitting in his father’s study repeating the stories he told him. “I guess I paint to recreate my childhood,” he says. The cover depicts the colour wheel designed by Goethe in 1809. This novel resonates with detail and wonder; art, history and human experience as well as shafts of recognition exciting the senses and emotions.

Brandes is aware he is running out of time and that after he is gone, there will be no one left behind to tell his story – everyone that mattered to him are dead. So he attempts to concentrate, he seizes a space in the chaos of images and takes his chance. Drawing on the history as a background Márquez also makes use of various artists, particularly the actual events of the life of Georges Braque (1892-1963). Brandes experiences events that actually did befall Braque who served in the first World War, but Márquez is careful to ensure that the reader does not assume that Brandes is Braque.

This is consolidated by the narrator. “Yesterday George Braque died,” he says, “it’s hard for me to explain, but today I feel I’m a bit more alone. I felt that same way about Matisse and Kurt Weill.” In the same way it is tempting to detect similarities between the narrator’s bereft father and his tragic vision of life with that of the writer Primo Levi who was also doomed to endure survival,

For the narrator though there had, of course, been the unsettling visits from Hofer, one of Göring’s henchmen, entrusted with the business of collecting as much art as the Nazi could acquire for his private collection. Hofer often appeared at the studio in which Brandes was based in Paris, offering threats clothed as bogus deals.

He would promise to return works previously confiscated from the artist’s gallery owner, a Jew, should the artist agree to surrender a valuable family heirloom, a much coveted Cranach. It was ironic how Hofer never simply snatched the painting. Once Brandes had directly queried Hofer’s reluctance, only to be met with outrage: “Do you take us for simple thieves? I’m offering you a deal: the paintings from the gallery and now all this junk in exchange for the Cranach . . . You decide, remember?”

In a life of being bullied by his art school teachers, there remains the nightmare of serving in the trenches under Sgt Forkel who jeered and goaded the men under him, taunting them on to insane acts of daring. Yet the artist in Brandes observes the horrors through the eyes of a painter: “I’d seen trees reduced to splinter, craters filled with water, horses with their legs in the air and their innards smoking, blackened carcasses of abandoned vehicles but the front was nothing like that. No. nothing at all. The front line was infinitely worse. A wasteland extended before us, of earth dug up by grenades, without a single blade of grass, where the dead on either side lay mixed together with rusty weapons and scraps of uniforms . . . Legs and arms emerged from the parapet that protected us from the English; they were as rigid as the stakes prepared for stringing up barbed wire. We often had to step on corpses just to move around what remained of the trench. That was the worst, worse than the fear and the cold, worse than the fear and the cold, worse than the uncertainty and the taste of gunpowder in our mouths. I never did get used to walking on soft chunks of rotting flesh.”

There is a declamatory quality about the exchanges; casual comments are in fact important statements. Brandes makes his case as he positions his place in history, albeit mainly as a witness, a hapless bystander. Not that there is any disgrace in that. The pain of his unfortunate marriage to a pro Nazi arts journalist, Erika, the mother of his child, is described as if giving evidence in a court room. Far more engaging and poignant are the sequences featuring his great love, Alma, an actress. Having survived Ravensbrück death camp, she died in a futile accident, again that prevailing sense of the random.

Her spirit is conveyed so convincingly that when she recalls once having silenced a heckler at a nightclub cabaret performance in Berlin who shouted “F**king Jews!” Her retort was a coolly delivered: “Actually we’re not, but I’m sure it’s our obvious intelligence that led to the confusion.” And it is impossible to doubt her – or Márquez, who is also a poet and an accomplished writer of children’s fiction. In this profound and tender, almost vulnerable work he takes many risks, loading his slim narrative with such an amount of historical material. Yet it somehow never overwhelms the story or threatens his central character’s calm, rueful tone of slight panic which is impressively consistent.

As delicate as a sigh Brandes’s Decision is shaped by the relentless and random snapshots of memory. First published in Catalan in Spain in 2006, it is an astute, deeply human confessional narrative in which a man is an artist, a soldier, and a lover. He is also a dreamer, most of all though, he is a son who owes his sense of beauty to the extraordinary imagination of a father who could see the magic ever present in the ordinary.

‘Heathers’: 30 years on – how the dark teen comedy predicted everything
5