How did Ulysses become a talking point in the US election? 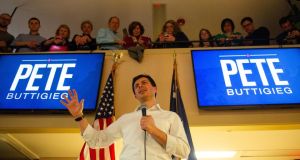 Almost a century after it was first published, James Joyce’s Ulysses has become a talking point in the race to become the Democratic Party’s nominee in the 2020 US presidential election.

One of the candidates, Pete Buttigieg, aka Mayor Pete, cited the novel as one of his favourite books in an interview with the pop-culture website Vulture, sparking a debate on Twitter about its merits.

Buttigieg described Ulysses as the greatest work of modern English literature: “It’s known for being complex and difficult, but in a way it’s very democratic: a story about what it is to be human as one middle-class guy goes about one day of his life in Dublin.”

Afterwards, commentators weighed in on the novel and dissected Buttigieg’s reading habits. Last night, Ulysses trended on Twitter in the United States.

Ulysses by James Joyce. People view it as this inaccessible, mysterious, complicated opus... but it's a very democratic book, about a guy going through life and the incredible depth and meaning to be found in the everyday. https://t.co/yXIBVHBHrP

The Buttigieg-Ulysses thing is interesting, not least because it links a Democratic progressive vision of 2019 to avant-garde modernism from a freaking century ago, which, tragically, *is* progress of a sort

James Joyce is trending, so I have to give Pete Buttigieg credit for that.

I must admit I struggled to read it, but it's worth persevering because it touches on so many familiar spots in Dublin. That makes it special. Hope you can visit sometime https://t.co/XqRQtWgFms

It is not the first time Buttigieg has heaped praise on Joyce’s novel. The son of a Joycean scholar, he has referred to the book in interviews with New York magazine and Esquire. The latter asked him if running for president was more like Ulysses or Finnegans Wake. His response? Ulysses, of course.

Buttigieg is not the only candidate to bring up the novel in the still-nascent campaign. Beto O’Rourke, the former congressman who narrowly missed out on a seat in the United States Senate in November, has often spoken of his love for Homer’s Odyssey, the Greek epic poem on which Ulysses is based. Last year O’Rourke talked about studying English literature at Columbia University.

“Only with the help of a great professor, I was able to read Ulysses by James Joyce, which of course is the same story [as Odyssey], just told in what was then modern times set in Ireland, ” he told The Other Side, a Texas radio show. “That blew me away and was just amazing.”

O’Rourke even named his eldest son Ulysses (“because we didn’t have the guts to name him Odysseus”). His other two children are named Molly and Henry. A reference to Molly Bloom and Henry Flower, perhaps?

O’Rourke and Buttigieg aren’t the only 2020 prospects who can claim to be Joyce buffs. The former vice-president Joe Biden, who is considering a presidential run, has often quoted or paraphrased the writer in his speeches, and described him as one of his favourite writers after viewing the author’s manuscripts at Trinity College Dublin in 2016. He is also the proud owner of a signed first-edition copy of Anna Livia Plurabelle, an early published chapter from the work in progress that would become Finnegans Wake.

Don’t be surprised if Leopold Bloom gets namechecked in the Democratic primary debates later this year.