Hostages – ‘this book was definitely a moment for me’ 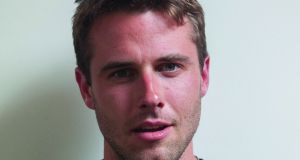 I was a very scared child. One of the things that terrified me was the idea that there were corpses growing in the fields around me. I imagined that they had been planted by an assortment of murderers from different centuries, or that they were the accidental litter of some local historical carnage. I even imagined that, given the right weather conditions, these corpses would grow out of the ground, upwards like flowers.

Other childhood visions I had, in no particular order, were: being eaten by talkative flies; waking up in a mass grave; falling apart as I was having a conversation; giving birth to animals; growing a year older every hour; communicating with recently dead relatives by tapping the radiator in my room and listening to the returning echoes; blowing up my school; and having a girlfriend.

I am sure at least some of these childhood imaginings are common, but they are, necessarily, and maybe thankfully, pushed aside by the onslaught of homework, the confused mania of puberty, and, finally, the more deadening aspects of employment.

I had been writing fairly seriously on and off since 2010, and I had made some personal breakthroughs, but my writing was often too trapped; and rereading some of my older work, I find now that it often described trapped individuals as well. My concerns had been personal, bordering on the selfish. There was no transcendence nor freedom, no range. Everything was very serious, very sad, and formally closed.

Then in 2014 I became happy, and gradually my interests shifted to fit my new state. I abandoned my steady diet of serious, dark masterpieces from the 20th century and began to read science fiction, utopian texts from the 1800s, peasant folk tales, Irish mythology, chivalric romances, and, most importantly, I revisited the texts from my childhood; things like Calvin & Hobbes, and Ursula Le Guin and Robin Hobb’s fantasy series.

My tastes became both more personalised and more democratic. Literature, for me, had suddenly become an invitation to adventure rather than an opportunity to meditate. I began to form the idea of writing something that was more colourful than dark, more feast than funeral, and the genres I was exploring gave me a new landscape within which to think, new perimeters within which to formulate narrative, and, after a year of drought, ideas were pouring in. Ideas that were too distinct and disparate for any single novel I could envision, so, after some time and a bit of difficulty, I recognised I would eventually end up creating a cycle of long stories so as to stuff everything in there.

After a month of working I realised that I had gotten the ideas down, and even most elements of the plots, but that the material I was producing was coming off too high concept, too intellectual; what I was working with didn’t give that fizzy brain rush you should get whenever you read something new and strange. As a writer you often end up with what you end up with, and you have no idea why. Reaching for a writing metaphor, which every writer seems to do every five minutes or so, you could say that you can’t really steer the ship you’re on; it just kind of floats along until you sink or hit land, so I tried to think myself out of whatever I had started on and it didn’t work.

A point finally came, I don’t remember when or how, when I decided I really wanted young people to be able to read my book. This is not saying that I was writing a book for young people – I wouldn’t know how to do that – but I just wanted the emotions in the book to be recognisable to them. For my ideas to work the stories would have to be – in outlook at least – generous, childlike and naïve.

So, in an unconscious kind of haphazard way, I began to drift back to some of the places from my childhood where I used to play, the sum total of which seemed to be a ditch, a burnt-out jeep, a tyre swing that had, with absolutely no foresight whatsoever, been built over an enormous mound of nettles, several stacked bales of hay and a thicket of trees that I used to believe was a forest. These didn’t bring up any specific jolts of memory in me, but they did make me more sensitive to the images I used to project onto them, and I was very happily surprised by how horrific and funny I found them now.

When I returned to writing what would become Hostages, it was these childhood images and ideas that became the hidden centrepieces of the stories; the too-intricate plots and projected payoffs I had planned either faded away or began to move in an auxiliary fashion around the childhood images, and my whole job seemed to become how I could integrate these images into my work, how I could justify a story based around something I imagined, or could have imagined, or would have liked to have imagined, when I was eight. Mainly, I found this undertaking funny, but I also took it very seriously.

This is why I ended up writing a book in which one story is narrated by a very emotional bomb; one story is about a farmer finding loads of dead bodies all over the place; one story is about having the Adidas-clad love of your life float away in a hot air balloon; and another one is about a woman having a political discussion with an imperialistic fly.

I don’t know if I achieved what I set out to achieve in writing Hostages, or if I achieved anything at all. I had a load of ideas and plans, which ended up being scaffolding for something else to be built. Every now and again a writer gets a moment, a few months perhaps, where everything comes together, and this book was definitely a moment for me. It makes me very happy that a new edition of this book is coming out in Britain, and I find it genuinely funny that now there might be a few readers from Glasgow or Birmingham reading a book about some ideas I had that terrified me when I was a child.