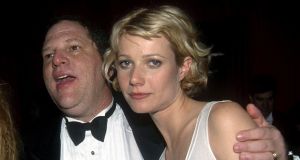 #MeToo revelations: Harvey Weinstein and Gwyneth Paltrow at the Beverly Hilton, in Beverly Hills, in 1998. Photograph: Patrick McMullan via Getty

Gwyneth Paltrow has been named a key figure in the New York Times story that first catalogued a series of sexual-harassment allegations against Harvey Weinstein, and led to the film producer’s dismissal from his own company and subsequent prosecution.

In their new book, She Said: Breaking the Sexual Harassment Story That Helped Ignite a Movement, Jodi Kantor and Megan Twohey, the New York Times reporters whose story in October 2017 triggered Weinstein’s downfall, write that the actor was “scared to go on the record but became an early, crucial source, sharing her account of sexual harassment and trying to recruit other actresses to speak”. Paltrow acted in a number of Weinstein-backed films, including Shakespeare in Love.

In an appearance on the Today Show, Kantor and Twohey said: “Gwyneth was actually one of the first people to get on the phone, and she was determined to help this investigation even when Harvey Weinstein showed up to a party at her house early and she was sort of forced to hide in the bathroom [while speaking to reporters].”

Bob Weinstein wrote to his brother, Harvey: ‘If you think nothing is wrong with your misbehaviour in this area then announce it to your wife and family’

The book also prints a previously unreported letter to Weinstein from his brother and business partner, Bob Weinstein, two years before the allegations of sexual harassment and abuse became public. In it, Bob Weinstein pleads with Harvey to get medical treatment for what he describes as many years of “misbehaviour”.

The book, published today by Bloomsbury Circus, sheds new light on the roles that several figures played in enabling Weinstein and covering up his misdeeds, and names key sources who helped reporters break the story – including company officials, Hollywood stars and other victims of the producer’s alleged abuse.

Drawing on new reporting and previously undisclosed corporate records, emails and text messages, She Said uncovers more on the extent of Weinstein’s alleged transgressions, and the labyrinth of secret settlements and restrictive nondisclosure agreements that allowed Weinstein and other men in positions of power to conceal their behaviour and thrive in their careers, in some cases finding new victims.

Weinstein, who is facing a criminal trial on charges of sexual assault and rape, has denied having nonconsensual sex and pleaded not guilty.

One of the central figures of She Said is a former top executive at the Weinstein Company, Irwin Reiter. Reiter, an accountant who worked for Weinstein for decades, was increasingly alarmed by his behaviour toward women and had raised concerns within the company, to no avail.

The book discloses that it was Reiter who provided the reporters with an explosive internal memo from an employee who described Weinstein’s routine harassment of junior female employees and actresses. Reiter also alerted Kantor and Twohey, who were investigating financial settlements for sexual harassment from decades ago, to other recent accusations against Weinstein, bringing new urgency to the investigation.

She Said similarly discloses the identity of a Weinstein accuser who has put off inquiries from journalists for 15 years, Rowena Chiu, a former assistant at Miramax who received a settlement in 1998 after Weinstein allegedly assaulted her in a hotel room. In Chiu’s account, which she shares in detail for the first time, she describes being silenced by a restrictive nondisclosure agreement and lured back to a job at Miramax in an apparent effort by Weinstein to keep her close. She struggled with depression and attempted suicide. She stayed silent for nearly 20 years, even declining to tell her husband about the predation or the settlement. (Weinstein has disputed her story.)

In his first extensive comments since the Weinstein story broke, Bob Weinstein explains that he mistakenly saw his brother’s problem as sex addiction, a rationale rooted in his own previously unreported recovery from substance abuse, and how he abandoned his attempts to intervene. “I got worn out,” he told the journalists. “I said, ‘I surrender,’ see?”

One suggested tactic for undermining Rose McGowan: ‘We can place an article re her becoming increasingly unglued, so that when someone Googles her this is what pops up and she’s discredited’

She Said, one of several forthcoming books about Harvey Weinstein and the #MeToo movement, is also an exploration of investigative journalism and how the New York Times executed a sensitive investigation. The book chronicles how the reporting came together behind the scenes, with accounts of the journalists’ first calls to actresses who they suspected had stories about Weinstein, and their efforts to identify recipients of confidential settlements.

She Said shows how some figures who have presented themselves as allies of victims have profited from financial settlements that silence them.

The attorney Gloria Allred is one of the most vocal crusaders against sexual harassment and assault. Privately, her firm helped negotiate a settlement that muffled one of Weinstein’s victims in 2004, taking a 40 per cent cut. (The firm has also worked on settlements that silenced victims of Larry Nassar and Bill O’Reilly.) In an interview for She Said, Allred defends her use of confidential settlements, arguing that clients are not forced to sign them and often prefer them for reasons of privacy.

Allred’s daughter, Lisa Bloom, a prominent victims’ rights attorney, was working behind the scenes with Weinstein – at a rate of $895 an hour – to quash the journalists’ investigation and thwart his accusers. In a confidential memo to Weinstein that Bloom wrote in December 2016, which is reproduced in She Said, she offered to help him damage the reputation of one of his accusers, Rose McGowan, and portrayed her background as a victims’ rights advocate as an asset.

“I feel equipped to help you against the Roses of the world, because I have represented so many of them,” Bloom wrote, before laying out a multistep playbook for how to intimidate accusers or paint them as liars. One of Bloom’s suggested tactics for undermining McGowan: “We can place an article re her becoming increasingly unglued, so that when someone Googles her this is what pops up and she’s discredited.”

Bloom accompanied Weinstein on a surprise visit to the Times the day before the initial article was published, to present the journalists with information intended to portray several accusers – including Ashley Judd, the first actress to go on the record – as unreliable and mentally unstable.

Bloom has said she was crossing sides to work for Weinstein to encourage him to apologise for his behaviour. She later told the reporters that she “deeply regretted” representing him, which she said was a “colossal mistake.”

She Said is among the first in a wave of new books about Weinstein and other powerful men accused of sexual misconduct. Earlier this year, Penguin Press acquired another Weinstein book by the New Yorker writer Ken Auletta. Little, Brown and Co plans to release Farrow’s book Catch and Kill: Lies, Spies, and a Conspiracy to Protect Predators, an account of his own investigation into Weinstein, scheduled for publication in October. – New York Times, Guardian

She Said: Breaking the Sexual Harassment Story That Helped Ignite a Movement, by Jodi Kantor and Megan Twohey, is published by Bloomsbury Circus