Gandhi’s autobiography: self-promotion down to a fine art

As India marks 70 years of independence, Clara Neary takes a closer look at the mythology surrounding the Father of the Nation, much of it his own creation 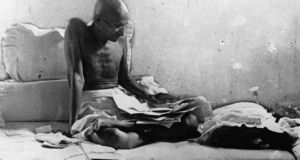 Mahatma Gandhi fasts in protest against British rule after his release from prison in Poona, India. Photo: Keystone/Getty Images

Seventy years ago, at the stroke of midnight, August 15th, 1947, Britain’s centuries-long dominion over India ceased. The terms of Indian independence were far from ideal – as its bloody aftermath would attest – and were the result of a rushed, highly acrimonious process. But of the numerous complex personalities – and associated egos – involved in the fight for Indian independence, it is the figure of Gandhi, the “Father of the Nation”, that continues to loom largest.

Since his death at the hands of Hindu fundamentalists in January 1948, countless books, documentaries and films have attempted to portray the life of the Mahatma (which, by the way, means “Great Soul”; his given name was Mohandas); likewise, his writings, the published versions of which run to more than 100 volumes, have been the subject of much cultural, social, political and spiritual commentary. Yet, despite an extremely well-documented life, little has succeeded in dispelling the myth surrounding a man who remains, in the words of one biographer, “as much an enigma as a person of endless fascination”.

This is, perhaps ironically, most true of his autobiography, The Story of My Experiments with Truth. Regarded by some as “one of the great autobiographies of modern times” and the most widely-read of his voluminous literary output, the autobiography spans Gandhi’s childhood on the Kathiawar Peninsula in Gujarat, his three years studying for the bar in London and two decades dedicated to the cause of Indian civil rights in South Africa, terminating in 1921. Originally published in weekly installments in both his native Gujarati and English, the text is structured around Gandhi’s “experiments with Truth”, a series of “spiritual, or rather moral” tests – including non-violence, celibacy and vegetarianism – through which he endeavoured to achieve self-realisation and liberation from the cycle of reincarnation.

Though usually luring readers with promises of “warts and all” access to its subject, autobiography has always been an act of self-creation, and hence one of self-censorship. Attempts to reconcile the opposing agendas of “I the narrator” and “I the subject” are seldom successful as the necessity for positive self-representation trumps all other concerns. Surely it isn’t so with the saintly Gandhi, I hear you cry! I’m quite glad to say it is; contemporary social-media users could learn a lot about shameless self-promotion from Gandhi! The title of his autobiography illustrates not only how his “experiments” shaped his identity, but also how this identity was self-created. The myth of Gandhi was, initially at least, created by Gandhi.

While Gandhi tells the reader he won’t “conceal or understate any ugly things that must be told”, it’s quickly evident that his honesty is firmly yoked to the service of identity-construction and self-promotion. Gandhi doesn’t show the reader who he is; he tells them. During the course of the text, he identifies himself with more than 50 social roles; on the first page alone, he asserts himself as public worker, prisoner, intellectual, writer, spiritual being and social reformer. Generally, these roles can be apportioned to the private or public domain, with the former including familial roles –son, brother, husband, lover and father – along with more unorthodox domestic roles. For example, he acted as medical adviser, nurse and, on one occasion midwife, to his pregnant wife, and took sole care of his baby sons for the first two months of their lives, modestly contending “My children would not have enjoyed the general health that they do today, had I not studied the subject and turned my knowledge to account”. He learned to bake bread, to cut his own hair and to cobble. He also “became an expert washerman”. Gandhi does not merely learn new skills; he becomes a professional exponent of them.

His awareness of this process of identity-creation – and its steely purposefulness – is at times tantalisingly glimpsed. It is little known that he was a confirmed Anglophile for much of his life, and “vied with Englishmen in loyalty to the throne”. During his three-year sojourn in London, he undertook numerous experiments in “playing the English Gentleman”. He took elocution, French and dancing lessons; he donned “a chimney-pot hat costing nineteen shillings”, spent “ten pounds on an evening suit made in Bond Street”, learnt the art of tying a tie, and “wasted ten minutes every day before a huge mirror, watching myself arranging my tie and parting my hair in the correct fashion”, all in order to “look the thing”. This early correspondence between Gandhi’s sartorial transformations and identity-creation is hard to miss.

At times, Gandhi’s honesty appears laudable. Married at age 13, he admits he was “devoted to the passions that flesh is heir to”. His “carnal appetite”, however, caused him to neglect the education of his illiterate bride, Kasturba: “I was very anxious to teach her but lustful love left me no time”. Similarly, knowing his ill father’s death was imminent, Gandhi nonetheless left his bedside to go to his wife, “blinded” as he was by “animal passion”; his father died moments after he left. These transgressions affected him deeply, resulting in his later vow of celibacy – against the wishes of his wife, it must be said. Indeed, Gandhi’s sexual identity – and attitude towards women more broadly – has proven the most troublesome, though recent salacious accounts of his experiments with celibacy – which allegedly involved lying naked with young women to test his resolve – have barely tarnished his halo. The world continues to applaud his saintliness, somewhat at the expense of his humanity.

Judith Brown, one of Gandhi’s most well-respected biographers, refers to him as “an enigmatic figure, both irritating and attractive”. And yes, Gandhi is irritating! The first time I read his autobiography, I found myself frequently holding the book at arm’s length, physically squirming at his sanctimonious smugness, his shameless self-promotion, his re-writing of past selves to suit present needs. But who, in our selfie-obsessed culture, can’t identify with this desire to present the best image of oneself?

Einstein famously said of Gandhi: “Generations to come will scarce believe that such a one as this ever in flesh and blood walked upon this earth”. But how much better to know that he did, and that, were he around today, he might just be walking this earth with selfie-stick in hand.

Clara Neary lectures in English at the University of Chester. She is from Co Roscommon