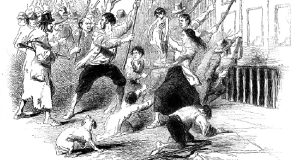 Food rioting is one of the most significant and, outside of Ireland, studied manifestations of purposeful crowd protest. It famously inspired EP Thompson, the great English historian and nuclear disarmament activist, to conclude that it was a manifestation of what he termed a “moral economy”. According to Thompson, a moral economy existed when firstly, those who engaged in riotous protest – either to access food directly, to reduce food prices to a price they deemed appropriate or to prevent its movement out of a region – perceived that they were entitled to intervene in this manner to secure access to the necessaries of life. Secondly, the authorities acknowledged this by declining to apply the full range of sanctions at their disposal, to which they appealed unhesitatingly to suppress other riotous behaviours.

In the interval since it was first propounded, the concept of a “moral economy” has been applied by historians, anthropologists, sociologists and others to explain a diversity of phenomena from food rioting in the Middle Ages to drug dealing in US inner cities in the present. It has been invoked on occasion with reference to Ireland, but guided by Thompson’s contention that Ireland did not possess a moral economy because “there was no political space (as in England)” whereby those he labelled “the plebs” meaning the poor and marginalised “could exert pressure on their rulers”, no attempt has been made to trace the history of food protest in the country.

Indeed, it has generally been contended, following Thompson, that the pattern of food rioting was not only intermittent but weak and short lived. This is no longer tenable. A closer engagement with the available source material than has previously been attempted proves that Ireland sustained a pattern of food protest that extended for more than a century and a half, beginning in the early 18th century.

It may be that this does not conform, other than occasionally, to the “moral economy” elaborated by Thompson. But it does indicate that, like the population of England in the 14th century, the peasantries of France, Spain and Germany in the 19th century and the hard-pressed peoples of Egypt, Morocco, Yemen, Tunisia and elsewhere in 2007-08, the population of Ireland in the 18th and early 19th centuries pursued an active tradition of food rioting in an attempt to alleviate their plight at moments of prospective distress.

Consistent with the definite link that has been made between food shortage, high prices and food protest, it will come as no surprise that the peak moments of food protest in Ireland coincide with food crises. But this was not all. Food rioting was not precipitated solely by shortage. It was also predicated on urbanisation and commercialisation – and specifically on the trade and sale of foodstuffs, and on their transfer from the countryside where they were produced to the towns and cities where they were consumed by town dwellers. These conditions did not obtain in Ireland, or at the least did not obtain in a sufficiently developed form, prior to the 18th century, which accounts for the absence of recognisable food protest before 1710.

Food rioting is first identifiable in Ireland, in the Munster port towns of Cork, Youghal, Limerick and Waterford, and the inland towns of Clonmel and Carrick-on-Suir in the early decades of the 18th century. Rioting was concentrated in these towns then because of the role they played in the sale and dispersal of food stuffs and because of dependence of those who lived therein on purchased food, and it was at its most visible at moments of crisis, which explains why it peaked in the 18th century during the famine years of 1729 and 1740-41, and the subsistence crises of 1756-7, 1766 and 1783-4.

But it was not confined to Munster, as food rioting has also been identified during these decades in the main east coast ports of Wexford, Dublin, Drogheda, Dundalk and Belfast, and inland locations such as Kilkenny and New Ross. Moreover, as urbanisation and commercialisation took firmer root, the number of locations in which food rioting took placed increased accordingly. The movements of goods along the Grand and Royal Canals was particularly notable in encouraging riotous interventions aimed at inhibiting the movements of foodstuffs from the in the midlands.

But it was the combination of population growth, commercialisation and poverty that transformed food rioting from the primarily east and southern coast phenomenon it was in the 18th century to a preponderantly west coast and midlands pursuit in the early 19th century.

It was also increasingly influenced by agrarian protest, with the result that it manifested a greater propensity for violence, which hastened the alienation, already underway, of the respectable. One consequence of this was the greater intervention of the authorities. This was most manifest during the the Great Famine, and the years 1846-7 particularly, when Ireland sustained the most intense period of food protest in its history. This is highly significant since it runs directly counter to the perception, long advanced, that the Famine years were “conspicuously for their tranquillity”. Food protest was not evenly distributed across the country at this time to be sure; it was most prevalent in Munster, south Leinster and Connacht, and seldom encountered in counties Carlow, Dublin, Antrim and Derry, but a reconstruction of the practice during these difficult years presents a new and revealing perspective on the impact of the Great Famine.

More significantly, if underlines the unacknowledged fact that both the urban poor and rural land poor were not hapless interests who accepted their fate. The tradition of food protest indicates that they possessed a view of how society should function, as well as a repertoire of protest strategies to which they appealed when this was not the case. Their approach, and still less their actions, do not accord with most accepted definitions of political activity. It does suggest, however, that the concept of popular politicisation that is applied may be too narrow and too focussed on the representative system and that it is time to move the crowd from the periphery to the centre and to acknowledge that food, and allied, protests were a form of political expression.

At any event, the history of food rioting offers an opportunity to expand the historical narrative to embrace more of the voiceless and, in the process, to provide a new, revealing and integrated vantage point on the 18th and 19th centuries, and, not least, on how we engage with and interpret the Great Famine.
James Kelly is the author of Food Rioting in Ireland in the Eighteenth and Nineteenth Centuries: the ‘Moral Economy’ and the Irish Crowd (Four Courts Press, €45)