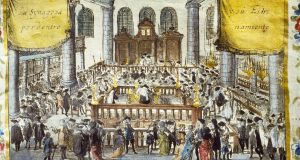 Seventeenth- or 18th-century manuscript drawing of interior of the Portuguese Sephardic Synagogue in Amsterdam. Photograph: Nathan Benn/Corbis via Getty Images

In 1835, in a house in the backstreets of Tangier, a beautiful teenage Jewish girl had a row with her parents. She stormed off and poured her heart out to a friend, a Muslim girl who lived nearby, who suggested that the Jewish girl embrace the true faith to get away from her parents. She refused, but there seems to have been a misunderstanding, and she was later condemned to beheading for the terrible crime of apostasy.

The sultan had ordered that the executioner cut her neck just deep enough so that the flow of blood would change her mind. But she was unrepentant, proclaiming her innocence, and, reciting the Shema, the Jewish declaration of faith, as her head was severed. Her name was Sol Hachuel, “the bearer of sunlight”. With French colonisation, such practices would end, and the Jews in north Africa would become a prosperous middle class. However, they would pay a price for this in the postcolonial era.

The story of Sol Hachuel illustrates a number of Schama’s important themes; firstly, the steadfastness of the Jews in their faith in the face of persecution and the fact that whenever their position seemed to be improving, a backlash was inevitable. This story is just one of the many fascinating episodes in this very readable book, Schama having decided to avoid the grand historical narrative and instead tell the extraordinary story of the Jews over the last half millennium by focusing on individuals.

A colourful procession of actors, boxers, printers and merchants move through the pages, as well as the usual rabbis and bankers. There is Juan Templo, who built a 1,000:1 scale model of The Temple in 17th-century Amsterdam. There is the first Jewish officer in the American Navy, Uriah Phillips Levy, who in 1834 caused outrage by buying Monticello, home of the founding father Thomas Jefferson. Schama weaves their individual stories into a rich tapestry of family and cultural connections across time and space.

Schama’s first volume, telling the story of the Jews up to 1492, ended on a tragic note, with the expulsion of the Jews from Spain, where they seemed to have found peace in a tolerant society where the sciences and arts flourished for hundreds of years.

This, the second volume, begins with refugees, dangerous journeys across oceans, people smugglers and the search for asylum. But it would become a story of triumph. The Jews expelled from Spain were welcomed in the city states of Italy, the Ottoman empire, and above all Amsterdam, where they would flourish. The Dutch Protestants, who regarded themselves as another Chosen People, had a deep sympathy for the Jews, and offered them freedom to practise their religion openly.

But there was also the matter of trade. The Jews, through misfortune, had a unique international network of family connections, the original social network, by which means trade could be conducted through agents and letters of credit, and the Dutch were eager to exploit it. Amsterdam became one of the richest cities in Europe, and in 1675, the Jewish exiles from Portugal erected a synagogue in the middle of Amsterdam, which could rival any Christian church. It was a high point.

Other Jews were not so lucky – in the rest of Europe, a level of grudging tolerance and uneasy co-existence could easily turn into murderous pogroms and burnings at the stake, as the Inquisition continued its tireless pursuit of Jews. But the Jews managed to turn disadvantage into advantage. Having people scattered meant that, no matter how bad things were in one place, they would survive elsewhere. Also, capital was easily transportable, as was learning and knowledge. But even wealth could not always offer protection, and the sense of precariousness never went away.

After the trauma of Spain, the question uppermost in the minds of many Jews was the one Schama opens his book with: could it be now? Was this the end of days, the time when the Messiah would come, leading to the final redemption and return to Jerusalem, the rebuilding of the Temple?

Many false messiahs appeared, ready to take up the role. The most successful was the charismatic Turkish mystic Sabbatai Sevi, who managed to persuade even the hard-headed bankers and merchants of Amsterdam that he was actually the Messiah, who would lead them back to Jerusalem. They liquidated their property, bought ships and prepared to leave. However, Sabbatai Sevi, offered the choice by the Turkish Sultan of death or conversion, chose Islam, throwing the Jewish world into crisis.

The 18th-century Enlightenment affected Jews, too, and many began to dream of a possible future in Europe, based on civil right and humanistic values, free of religious trappings – a kind of assimilation, in other words. It was the French revolution that finally gave Jews equal rights as citizens, and as Napoleon rampaged through Europe, he broke down the gates of the ghettoes everywhere he went.

The 19th century seemed to witness a steady progression of Jews into mainstream society, especially in Germany, as their business and scholarly energies were applied to art and politics. But Schama points out that the old hatreds were still there. He gives the example of Odessa, the city that seemed to be a Jewish capital, where Jews lived normal lives alongside gentiles, with Jewish gangsters and dockers as well as scholars and rabbis. But even here the apparent normalcy was periodically torn apart by savage pogroms, in which thousands of people were slaughtered.

The Jews embraced modernity, says Schama, but as they played a bigger role in European societies, something else was happening. The anti-Semitic prosecution of Dreyfus at the end of the century, happening as it did in the home of liberty and equality, was a profound shock to the Jewish world, and it was echoed in similar cases all across Europe. By then some Jews, such as the journalist Theordor Herzl, had begun to draw their own conclusions about belonging. Herzl argued that Jews would never belong in European societies and needed a homeland of their own, a nation, a country. After some discussion, the ancient land of Israel emerged as the obvious choice. Schama ends this volume with the question: should it be now? The next and final volume of this prodigious narrative will provide the answer.