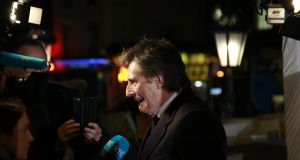 The screams of delight of the committee could be heard from afar when one of the first authors agreeing to be part of the festival was Gabriel Byrne. Photograph: Nick Bradshaw

Our dream when launching Dingle Lit last year was one where we envisaged authors, readers and writers mingling happily in west Kerry. That first festival last winter was epic. It superseded all our expectations and we thought: this is it, the only way is up!

We planned and we plotted, and sometimes we wavered, but today we bring Dingle Lit 2020, but never as we envisaged. This pandemic has certainly greyed our early dreams, but our vision for Dingle Lit remains firm for the future. This year all author events will be online and free to view.

We have an opportunity now to bring Dingle and west Kerry to book lovers all over the world from November 20th-22nd.

The immediate challenge was how do we make this happen. I must confess I did have a few sleepless nights when the talk turned to Zoom, Crowdcast, broadband capabilities and the best way to sit in front of a camera for an online event. We approached the Dingle Hub for tech help and they immediately came on board. Normally festival offices are a hive of activity, full of bustle and people. Our 2020 “control room” in the Dingle Hub allows two people on current social distancing guidelines and will be a room brimming with PC screens.

The screams of delight of the committee could be heard from afar when one of the first authors agreeing to be part of the festival was Gabriel Byrne. Gabriel has written a memoir, Walking With Ghosts, which Colum McCann has called “a masterpiece . . . poetic, moving and very funny” . If only I could buy him a pint of Guinness in Dick Mack’s after his event… another year hopefully.

We quickly got TG4 on board to broadcast our events as Gaeilge, the showcase of which is afternoon tea with Mary Kennedy. We will also be staging a production of IMRAM’s The Wine Dark Sea, featuring stories from Homer’s Odyssey, performed by Dairena Ní Chinnéide and  Ciara Ní É. We are so excited that this production is actually coming to West Kerry. I already have my name on the door at Ionad an Bhlascaoid.

I’ve recently finished The Girl With The Louding Voice and cannot wait to introduce Abi Daré to an Irish audience as she talks to Ugandan novelist Jennifer Nansubuga Makumbi, author of The First Woman, a book I am about to read and is already a pick of the Irish Times best books of autumn 2020.

We are showcasing many wonderful Irish authors. A gem of an event will be Sara Baume reconnecting with Carlo Gébler to discuss home, identity and Handiwork. I have loved Sara’s writing from the start, it is so refreshing, different and thought-provoking. Doireann Ní Ghríofa, Cathy Kelly, Michelle Dunne, Mary O’Donnell, Cauvery Madhaven and Felicity Hayes-McCoy are also appearing throughout the weekend.

Earlier this year I read Mark O’Connell’s Notes from An Apocalypse which is an eye-opening read. I have not thought of Elon Musk or New Zealand in the same light since. This is a book I would certainly recommend in a pandemic year. We are delighted to host Caelainn Hughes talking to Noelle Brown. Brexit and Covid-19 are taking all the headlines right now. However, we must ensure that the scandal uncovered by Caelainn’s incredible investigative journalism continues to be heard.

Speaking of Brexit, whileliving in Britain through the Brexit referendum I experienced the lies and abuses of power by forces know and unknown. Peter Geoghegan in his bestseller Democracy For Sale sheds a light on the dirty politics selling out democracy as we know it.

A Dingle Festival would not be a festival without a little sparkle and merriment. Finn McDonnell, owner of Dick Mack’s, will show us how to make cocktails inspired by Peaky Blinders. We will also be running a competition online for viewers to win a gift hamper (Dingle products, a copy of the cocktail book and official Peaky Blinders goodies).

We will have a cook-along with Michelin-starred chef JP McMahon as he creates the classic Dingle Pie recipe from his The Irish Cookbook, while chatting with Mark Murphy from the Dingle Cookery School. We scheduled this event so that everyone can join in and make Friday’s dinner on November 20th. Dingle Pies will be on the menu in houses across the country.

We hope to inspire the next generation of writers with a variety of online workshops with the team at Splonk; Conor Kostick at the Irish Writers Centre; ;Justine Carbery talking about Spinning Straw into Gold; Nicholas McLachlan and Eileen Sheehan sharing thoughts on poetry; and for independent authors we have all the advice needed from Siobhán Prendergast of Dingle Publishing.

The support from key organisations has been fantastic. Karl Wallace and Sarah Bannan at the Arts Council have been super. We had a couple of Zoom calls with them when we were grappling with the issues and it was great to have their calm and assured voices of support. We also received support from Kerry County Council, Foras Na Gaeilge and Údarás na Gaeltachta. Our founders, many of whom are west Kerry businesses, have said they will support us this year.

With all the festival events online we wanted to ensure that book sales still continued at the same level. It was great that after a short conversation with Tomás Kenny, we had a partnership agreed with Kenny’s online bookshop.

Festivals and west Kerry go hand in hand. When I moved to the area three years ago, one of the draws was that there was a festival every month. The last festival here in 2020 was in February and it’s great to be able to make another festival happen and shine a culture light, albeit for a weekend on Chorca Dhuibhne.

Covid means there will be no ushering the audience to their seats, asking for hush, no queue for book signings afterwards. Instead we will have the tap of the keyboard and the click of the mouse. And while I will miss the buzz around west Kerry knowing that we have an audience joining us from around the world will be great.
Sheila O’Reilly is Festival Director of Dingle Lit