Derek Mahon, one of Ireland’s leading poets, has died, aged 78

His poem, Everything is Going to be All Right, captured the national mood during the pandemic 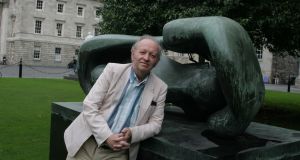 Derek Mahon in Trinity College Dublin, where he studied

Derek Mahon, one of the foremost contemporary Irish poets,  died in Cork on Thursday night after a short illness. He was 78.

His poem, Everything is Going to be All Right, a short lyric of solace and determined optimism captured for many the national mood in the face of the Covid-19 pandemic.

He will also be remembered for such ruminative poems as A Disused Shed in County Wexford, A Refusal to Mourn, Beyond Howth Head, his elegy for Louis MacNeice and his epistolary verse sequences, The Hudson Letter and The Yellow Book.

A member of Aosdána, his many honours include the Lannan Literary Award for Poetry (1990); The Irish Times-Aer Lingus Poetry Prize (1992); the David Cohen Prize for Literature (2007); and a three-time winner of the Irish Times Poetry Now award.

Born in Belfast in 1941, Mahon has mostly been resident in the Republic since his student days in Trinity College and had lived in Kinsale for the past several decades.

With his first poems Mahon distinguished himself as an outstandingly gifted member of the younger generation of poets that emerged in the late 1960s. A review of his debut collection, Night Crossing, published in 1968, referred to his “vitality of image”, and this skilful ability as a maker of the radiant poetic image was his remarkable gift.

Mahon’s role models and influences were MacNeice and the poet he described as “the floppy-slippered bear of St. Mark’s Place”, Auden, but his own superb body of work from the past 50 years can stand in accomplishment as the equal of theirs. Exactitude and elegance are among its hallmarks; crystalline language and coherence of thought come together in a Mahon poem. He was a disciplined master of the formal poem whose lines never failed to produce a resounding musical quality. Almost every poem arrived at a moment of illumination.

He shared Beckett’s sombre view of the starker everyday realities, a view that often motivated his work and imagination, particularly early poems that looked to the aloneness and desolation of the human condition. But the humour that abounds in Beckett is well-matched by the wit that Mahon sprinkles throughout his work, often in those poems that demonstrate his talent for sharp social observation.

His quest in many early poems was to question and explore the Northern Protestant mindset, aware of what he once called “the complexity of the continuing Irish past”. In a letter to this newspaper in 1987, he clearly distanced himself from his Northern contemporaries. However in many early poems his Northern background is far from forgotten and few poets have so resonantly evoked the specifics of place as in such poems as Autobiographies, North Wind: Portrush, Derry Morning.

Since Harbour Lights, published by Gallery Press in 2005, when he was 64, a remarkable late flowering and renewed spirit produced work of the first rank, reminding us that here was a poet growing old but keeping in touch with the modern world, its cultural mores and what he discerned as its false values, as well as its 21st century predicaments, particularly regarding the state of the planet and environmental anxieties. Harbour Lights as well as Life on Earth (2008) and Against the Clock (2018), each won the Irish Times Poetry Now Award. His final collection, Washing Up, is published this month.

The town of Kinsale which has been his home for many years is celebrated in several of the later poems He was also the author of brilliant journalistic commentary and essays, writing a regular letter from New York for The Irish Times during his tenure there in the 1980s.

In The Sea in Winter, Mahon describes himself as a poet “Scribbling on the off-chance…” and in A Curious Ghost tells us he “lapsed into lyric lunacy”. That off-chance and lyric lunacy resulted in poetry of profound depth and grace by a poet who throughout his career maintained and expanded his universal sensibility.

Derek Mahon was a poet of the “Global Village” – a title he gave to one of his Hudson Letters.

He is survived by his partner Sarah Iremonger and his three children, Rory, Katy and Maisie.