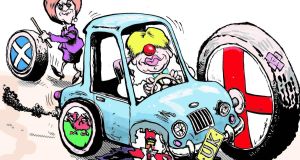 Past readers and contributors of Fortnight Magazine may be surprised – and we hope pleased – to hear that it is being revived with a new 80-page issue to be published in both printed and digital formats on September 25th.

The purpose is not just to celebrate an anniversary but to take up again the role the magazine played throughout the Troubles and the peace process as Northern Ireland faces yet again the same kind of uncertain future that it did in 1970. The aim then was initially to document abuses by security forces and paramilitaries on all sides and to suggest realistic and deliverable political solutions for a territory caught by history between the British and Irish peoples and states.

That has not changed, though the current constitutional, political and economic problems are obviously different. Brexit and the current standoff between the (dis)United Kingdom and the European Union pose new problems for everyone in these islands. The role of a small but hopefully influential magazine like Fortnight is to provide a platform for serious discussion and debate from all sides on what may be the best way forward.

This new issue – number 479 after a break of some eight years when a measure of peace and stability seemed to have been achieved – is focused on a range of new potential futures and how they might be delivered.

Judge Richard Humphreys renews his ideas for a federal solution that can accommodate the principles of the Good Friday/Belfast Agreement. Hugh Logue, a founder member of the SDLP and an enthusiast for the European Union, invites unionists to engage in a positive conversation on the advantages of retaining membership as part of a reunited Ireland. Colin Harvey from Queen’s University Belfast also argues for a period of serious consideration of the forms of unification that might work to resolve the obvious dangers of renewed communal conflict.

In my personal contribution, I have tried to imagine what Kevin Boyle and I might have recommended as a way of combining what is politically and economically deliverable and would respect the long-standing historical, familial and cultural relationships between the peoples of the two islands. That highlights the stupidity of starting with a new Border poll before any of the issues have been worked over and some compromise reached on the balance between retaining the benefits of the established free travel area, avoiding hard economic borders and respecting the principles of the Good Friday settlement. It also questions whether a 50 per cent + 1 vote in a divided society is likely to resolve or increase communal tensions. Maintaining the current form of ad hoc joint authority over Northern Ireland for the immediate future might be best.

Other contributors have written about how these potential developments might be handled with the assistance of citizens’ assemblies or an Opsahl-style commission and how the increasing proportion of those in Northern Ireland who reject the constraints of the “two communities” mantra might affect the outcome.

There is also, as in the past, a substantial arts and cultural component. Some of this is designed to introduce new readers to the past history and achievement of the magazine and to remind old enthusiasts of what might be revived. There is a very short history of the magazine and its diverse editors by Andy Pollak. There are contributions on contested writing and the currency of poetry over the years. And there is an extended set of Covid Monologues in which younger writers have been encouraged by Anne Devlin to record their experiences and frustrations during the pandemic. And there are of course cartoons by Martyn Turner and Ian Knox of Dog Collars fame.

It remains to be seen whether any of this can make an impact in the new age of social media with its instant likes and dislikes and word-limited tweets. There must surely be a better way of dealing with serious political and economic issues in a divided society than pursuing popular and simplistic slogans, relying on a binary Yes/No vote with the winner taking all and the kind of organised internet campaigning that involves.

Fortnight survived for more than 40 years with a different, more measured and less urgent form of democratic and cultural debate. It operated as a kind of voluntary collective in which most people contributed without financial reward of any kind and costs were met from subscribers, supporters and grants. We were grateful that so many leading politicians, commentators and academics contributed willingly in that way over the years.

The revival is based on a similar but now digital model of low-cost operation with no full-time paid employees, no physical premises or overheads and relying on some limited individual or external funding. There is hope in the fact that for this issue almost everyone has agreed to contribute on that basis. Northern Ireland is not the same as the rest of Ireland or England, Scotland or Wales. It needs its own voices and the time and space to work out its own special future. Let’s hope that the new Fortnight can survive and help deliver just that.
fortnightmagazine.org