Dear younger writer self, can I give you some advice?

Joan Brady on taking the scenic route to write her novel, missing her deadline to go from journalist to author by a mere 20 years 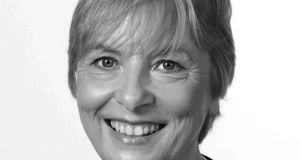 Joan Brady: with the benefit of hindsight, what were the things I wish I’d known then?

I started writing creatively in school after my late sister Vera told me the best way to get good marks in English was to make things up. As an over-anxious child this advice seemed to be too good to be true, but I thought there was no harm in trying it out.

And of course she was right. Writing creatively did get me good marks in English. But it also provided me with a passport into a whole new world where I could use words to express myself and process the difficulties of life, something I do to this day with my journaling practise.

But then it meant so many happy hours of making stuff up. Some of my stories even won competitions. I can still remember their titles. Dublin’s Beauty, Everyone’s Duty. Six Inches Tall. The Tale of a very Tall Cat.

Writing letters to the newspapers followed, and when I discovered that the Evening Press would pay me money every time they published one of my letters on their Junior Press page my fate was sealed. I was going to be a writer.

We had no writers in our family and I didn’t know anyone who was a writer but this was mere detail.

I became a journalist, a career I loved. It allowed me to research all the things I was curious about, meet lots of interesting people and get paid to write about them. It was all I’d ever wanted really.

Well, that and to write a novel. And I started so many novels! I would write the imaginary blurb for the back of the book, give my main character a name, a life and even a problem. And then I would invariably write my story into a cul-de-sac, usually at the 10,000 words mark, and there my novel would sit, because I hadn’t a clue about how to get it out again.

As a newspaper features writer I volunteered to do all the interviews with writers, thinking that whatever it was I needed to know would rub off on me just by talking to them.

But it was only when I went to an old-fashioned evening class that I became unstuck. At the Finish Your Book course at the Irish Writers Centre I learned that writing is a novel is a completely different craft to journalism and I was going to have to sit down and learn it from scratch.

And so when my first novel, The Cinderella Reflex, was finally published by Poolbeg I had missed my deadline of writing a book by the time I was 40 by a mere two decades! Now with my second novel, Reinventing Susannah, out in paperback, I can see how I could have done it much, much sooner.

So with the benefit of hindsight, what were the things I wish I’d known then?

Well, for once, I didn’t have to work it all out on my own
At that early evening class we were asked to add 2,000 new words each week to our novel, which meant I didn’t have much time to fiddle with the words I had already written, trying to make them perfect. Which was very good advice indeed because I was soon to learn that the first few chapters of a first draft often never make it into the finished novel at all.

Conversely I didn’t have to know everything before I started
Obsessively trawling the internet for random information about other writers amounted to time I could have spent writing myself.

Realising that a wish is not a goal
I like to daydream and writing a novel in your head is a lot easier than transferring it onto your page or computer file. If I wanted to finish, I was going to have to commit to the task in the same way I would if I wanted to run a marathon or pass a big exam.

I needed a roadmap
In hindsight I can see the main reason I ended up in the dreaded 10,000-word cul-de-sac was because I didn’t have an outline. With an outline you can stress-test your big idea to see if it’s actually that big after all. Specifically if it’s big enough to sustain 100,000 words of storyline. Having an outline also means I can enjoy the scene I’m writing instead of subconsciously fretting where the story is going next. If anywhere.

The story needed quality time
Relegating my novel to “whenever I get a spare minute” was a guarantee that it would never happen. I had to make it a priority and to do this I had to brainwash myself with the mantra “my writing is important”. I had to keep saying this until I believed it enough to stop squeezing my writing into the margins of my life.

Accepting that my first draft would be a hot mess!
It broke my inner perfectionist’s heart to do it, but I had to learn that rewriting was for subsequent drafts and that even when my novel was finally published, there would still be room for improvement.

And that was it. Taking the scenic route to writing a novel has been quite the trip. When I remember all those stalled early efforts I wonder why it took me so long to look for solutions. If it is true that we are always in the right place then maybe it was just the case that this was the time for it to happen.

But if I were to write a letter to my younger writer self it would include the line that the definition of madness is doing the same thing and expecting a different result. I would advise her that if she couldn’t figure it out by herself then it was probably because she had something to learn.

Quite a lot as it turned out.
Reinventing Susannah is now published in paperback by Poolbeg