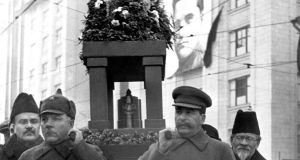 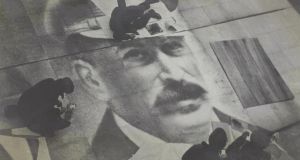 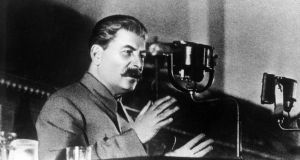 Stephen Kotkin’s key insight in the first volume of his groundbreaking biography was that Joseph Stalin’s personality was moulded and driven by the politics of ruthless class war in defence of the revolution and the pursuit of communist utopia. Stalin’s paranoia was political and ideological, honed by the isolation of the Soviet state and the siege mentality required to survive in a hostile capitalist world.

Stalin’s propensity to use political violence had come to the fore during the civil war that followed the 1917 Revolution. But in this he was no different from other communist leaders, such as arch-rival Leon Trotsky, whose defence of “Red Terror” he applauded. In the 1930s, however, Stalin was peerless in his deployment of mass terror to destroy both real and imagined enemies of the Soviet regime.

Peasants were the largest category of victim, with millions killed, deported or starved to death during the drive to forcibly collectivise Soviet agriculture. The rationale was that establishing control of food supplies was essential to support industrialisation and rearmament – tasks made more imperative by Hitler’s rise.

Harder to fathom is the Great Terror of 1937-1938, when more than 1.5 million people were arrested and nearly 700,000 executed, including hundreds of thousands of loyal party members and state officials. The Red Army’s high command was also decapitated, while Soviet diplomats suffered an equally devastating purge.

“What regime liquidates colossal numbers of loyal officials?” asks Kotkin, “what great power has ever executed 90 per cent of its top military officers?” World history, he notes, “had never before seen such carnage by a regime against itself”. Yet Stalin and his system survived to fight and win the greatest war in history – a feat of arms that underpins the dictator’s enduring popularity in contemporary Russia.

While Stalin and the Soviet system had many real enemies, the Great Terror was driven by an ideological fantasy – Stalin’s misplaced belief that class struggle must intensify as socialism grew stronger: the more successful the Soviet Union, the more implacable became its enemies, and the more devious and desperate their methods.

Although the scale of Soviet state violence against its citizenry remained hidden, Stalin’s campaign against “enemies of the people” was no secret. Indeed, he staged show trials in which high-ranking party leaders – Stalin’s comrades-in-arms in the 1920s – were condemned to death for acts of treason and collusion with foreign foes.

Stalin’s ideology is a necessary but not sufficient explanation of the Great Terror. One of the many attractions of Kotkin’s second volume is the way he pieces together the deadly interaction of Stalin’s ideas, personality and political manoeuvres. Stalin’s terror resists rational analysis: it is a story to be told and behold. Hundreds of books and articles have been written about Stalin’s terror and Kotkin’s account ranks among the very best.

The book provides a chronicle as well as a biography of Stalin’s life. Its 900 pages of text and 200 pages of small-type endnotes seek to record Stalin’s every important utterance and action. The depth of Kotkin’s scholarship and his command of Russian archival sources are truly impressive. While for specialists the book is a treasure trove; some readers may find the detail daunting, but it is far from dull. Kotkin writes with verve and imagination and pages of brilliant synopses intersperse the narrative.

Throughout the 1930s the USSR prepared for war. After Hitler came to power in 1933 the Soviet Union joined the League of Nations and sought collective security alliances with other great powers. Kotkin is adamant that “Stalin cannot plausibly be portrayed as a clear-eyed realpolitiker abroad and unhinged mass murderer at home; he was the same calculating, distrustful mind”.

Soviet intervention in the Spanish civil war is the most striking example of the linkage between Stalin’s domestic and foreign policies. General Franco’s mutiny in July 1936 sparked a social revolution in Republican-controlled Spain led by anarchists and Trotskyist sympathisers. Trotsky had been exiled from the Soviet Union in 1929 (in 1940 he was assassinated in Mexico by a Stalinist agent) and it was Stalin’s fear of a Trotskyist revolution in Spain, as well as geopolitical considerations, that motivated Soviet intervention, Kotkin argues.

Stalin’s prewar diplomatic manoeuvres culminated in the August 1939 Nazi-Soviet nonaggression pact, which freed Hitler from the danger of a two-front war against Britain, France and the USSR and enabled him to attack Poland with impunity. Somewhat uneasily, Kotkin straddles the debate between those who think that Stalin always wanted to cut a deal with his fellow dictator and those who interpret the pact as a last-ditch manoeuvre motivated by his suspicions about Britain and France, which spent years appeasing Hitler before embracing the idea of an alliance with the Soviets.

The Nazi-Soviet pact was destined to fail but that didn’t stop Stalin from striving for longer-term co-existence with Hitler. When Hitler conquered France in summer 1940, Soviet-German co-operation broke down and the countdown to war began. It was obvious Germany would invade the USSR, but Stalin feared premature Soviet mobilisation would provoke Hitler into launching an attack.

Kotkin’s account of the last days of peace is gripping, and he argues, convincingly, that Stalin was surprised by the German attack in June 1941 because he fooled himself into thinking Hitler shared his calculation that it made no sense for Germany to invade the USSR before finishing off Britain, an idea reinforced by an elaborate German disinformation campaign.

But Kotkin underplays the main reason that Stalin risked so much on a calculation that he must have known could well be wrong: his belief that Soviet defences would hold whenever and however the German invasion came. That was an illusion shared by Stalin’s generals, who after the dictator’s death in 1953 spread the fake news that the initial success of the German surprise attack was all Stalin’s fault.

Kotkin’s treatment of these key episodes in Stalin’s biography is not perfect. He doesn’t get everything right. The referencing is not always clear and some of the sources he uses are of dubious value. Most of his interpretations withstand scrutiny but others are more problematic. Especially jarring is his fanciful counterfactual speculation that if only Stalin had appeased Hitler more, war could have been averted.

Like many great works of history, Kotkin’s Stalin is a flawed masterpiece.