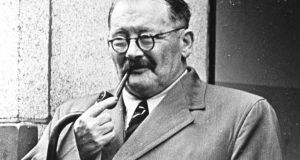 It would be hard to imagine a less “typical” figure than the Irish Times editor RM Smyllie. He hit his tee shots with a nine iron. His speech was a bizarre amalgam of Latin phrases and demotic Dublinese. He weighed 22st (140kg) and cycled to work wearing a green sombrero. As editor of a paper then associated with the “Anglo-Irish,” he objected to calling “Kingstown” Dún Laoghaire, resisted the abolition of The Irish Times’s royal-watching Court and Personal column and circumvented wartime censors on VE Day in 1945 by arranging photographs of the Allied leaders into a “V for Victory” symbol.

But he also hired The Irish Times’s first Irish-language columnist, championed Ireland’s economic development and defended the country’s wartime neutrality in the international press. He was a fixture of the Irish establishment yet regularly lined up with the rest of The Irish Times staff to receive his weekly pay packet from the paper’s cashier.

But while Smyllie may not have been “typical” of anything but himself, he shared with his fellow southern Irish Protestants a refusal to accept what Ian d’Alton calls the “grand tragedy” narrative of alienation and decline that is often associated with the group. Instead he, like so many, opted for patriotic engagement with the modern State. In my book Smyllie’s Ireland: Protestants, Independence, and the Man Who Ran the Irish Times, I explore how Smyllie’s life and the lives of those in his extensive social network reveal some of the strategies southern Protestants used to make their way in 20th-century Ireland.

One of these strategies was becoming involved in one’s locality. Smyllie was raised in Sligo and grew up in an area where southern Protestants played an influential role. His father, an accomplished musician, journalist, editor and local councillor, was in many ways the kind of thoroughly engaged turn-of-the-century Protestant bourgeois that some nationalists and historians like to forget ever existed. No one seemed to have informed Smyllie snr that his people were dying relics of a colonial order. In the pages of his newspapers and in countless meetings, he made a small-u unionist, small-c conservative, large-S Sligo man’s case for his people’s place in Irish life. Not all southern Protestants lived in Dublin, or in Big Houses or on small farms, and they were actively involved in the affairs of their cities and towns.

Another strategy used by southern Protestants was developing a strong connection to Europe. After the war, Smyllie jnr gained a position on The Irish Times as a foreign correspondent. In his reports from the Paris Peace Conference in 1919, Smyllie both spoke to and for southern Irish Protestants who were trying to make sense of Ireland’s position in the postwar world. Later, in a series of travelogues about Czechoslovakia – which were eventually published in book form and earned him the recognition of the Czechoslovakian government – he made an even stronger case for an internationalist perspective. That willingness to look outward for solutions to Ireland’s problems was something Smyllie shared with other southern Protestants: as the 20th century wore on, it would become one of their defining characteristics.

Yet another way that Protestants made their way in independent Ireland was by becoming “patrons”. Some found their way in to Irish life via that intersection of literature, art, music, jobbery, backstabbing and self-promotion that characterised Dublin culture in the middle of the 20th century. Smyllie, for a time, was the undisputed – although never unresented – king of this environment, with the power to feed a starving poet with a single commission. And he played the role to the utmost. Smyllie, holding court at the Palace Bar, was the kind of bohemian who made visitors from Soho or Nollendorfplatz wonder if their own affectations were quite eccentric enough. But this apparently lawless netherworld was in fact a highly organised and rigidly stratified hierarchy, and one that allowed Smyllie and other southern Protestants to find a role for themselves in Irish society.

Southern Protestants also succeeded by demonstrating their national loyalty in wartime. Although the stereotype of the young officer changing out of his British uniform at the Border before returning to his family’s Big House has some truth to it, many southern Protestants found their commitment to Ireland strengthened by the second World War. Smyllie’s position was clear: he fully supported the British war effort, and he involved the newspaper in a war of its own against Ireland’s press censors, who were tasked with making sure that combatant nations did not begin to think that Ireland favoured one side or the other in the conflict. But Smyllie also believed that it was his duty as an Irish citizen to work within the system, even when – especially when – this meant pointing out the government’s errors. In taking this stance, he reflected a fairly common attitude among southern Protestants. Ireland was their home, even if some of them fought for another country.

Finally, southern Protestants succeeded by upending what is perhaps the most pernicious misconception about them: what one might call the “Anglo-Irish fallacy”. The group has long suffered from its association with that motley cohort of aristocratic and semi-aristocratic grandees known, with varying degrees of error, as the “Anglo-Irish”, the “Ascendancy”, the “Anglo-Irish Aristocracy”, or “Big House Protestants”, whose spectacular fall from their 18th-century zenith has been irresistible to historians and fiction writers alike. It is easy to understand the appeal of this narrative: the exodus from castle to semi-detached is a lot more picturesque than the shift from Rathmines to a slightly less expensive street in Rathmines. But it is still a misrepresentation: those Eugenio Biagini calls “ ‘small-house’ Protestants” were the majority within the minority.

However, while it is incorrect to think all Protestants lords, it is true that many members of the group were remarkably effective at maintaining their position in Irish society. The shrewd social networkers of the mid-20th century would never have allowed themselves to fail as spectacularly as the “Anglo-Irish”. Smyllie was one of many southern Protestants who, it turns out, were quite successful at making sure that they remained successful.

As idiosyncratic as RM Smyllie was, he, like many members of the minority, refused to be defined by decline – and, in doing so, he and they found a place for themselves in the country they loved.

Smyllie’s Ireland: Protestants, Independence, and the Man Who Ran the Irish Times is available now from Indiana University Press