‘Being naked is more risky, and honest, than being nude. The best poets allow themselves to be naked on the page’ 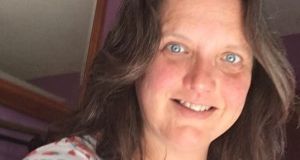 Susan Millar Du Mars: Raymond Carver once said that his writing started to be successful when he stopped thinking of it as self-expression and instead thought of it as communication.

I was in town to give a reading from my new book, Naked, and two naked men walked into Starbucks right behind me. I asked one of the men if I could take his picture, and he consented. I’m kicking myself that I didn’t get a photo of him holding my book.

This was in the Castro, the famously gay neighborhood in San Francisco. The men were in their sixties or possibly 70. They were tan and very fit. I say they were naked, but each had a small bit of cloth wrapped around his penis. They also had on sandals, and one sported a sunhat. Both they and the counter staff were completely chilled about this. We customers did stare and whisper a bit. But only a bit.

San Francisco was once my home, and this is exactly what I miss about it – people being themselves to the nth degree, in pursuit of whatever joy and liberty life can afford them. And other people, by and large, letting them.

I got my MA from the University of San Francisco, and published my first poems in the Bay Area. In a sense, it is where I began to be myself. Now, 25 years later, I’d published my fifth collection, Naked: New and Selected Poems with Salmon Poetry. And, with help from Culture Ireland, I was about to launch my book here. The much lauded Poetry Flash series had invited me to read alongside Californian poet Austin Smith at an event in Berkeley. It meant a lot to me to bring the book to the place where my career as a poet started.

Naked was only out a week at this point, and I was still getting used to the book myself. I was also getting used to its title, which I’d slapped onto it, in a fit of inspiration/desperation, just before turning the manuscript in. How do you choose a name for a quarter century’s worth of work? It was not a straightforward process.

The book’s title poem was originally called Flood. It’s after the painting Humankind Before the Flood by Hieronymous Bosch. All the people in his painting are nude, and all fearlessly enoying themselves:

Had wandered drunk in pink sand palaces,
shared the secret smells of their bodies
under six foot flowers, carved the flesh from
pomegranates and set sail in the husks.

The pivotal line in the poem is They’d thought they had time. How often do we think, “This is the start of the good times!” Only to realise, long later, that that was the good time – the whole of it. We are always vulnerable, spiritually naked, before that huge clockface calculating when things will change. When our time is up.

That poem connects back to many of the poems in my third collection, The God Thing. I wrote that book in response to the illness and death of my mother-in-law, Mary Higgins, and my resulting questions for God (starting with, Do you exist?). There are a lot of boat references in The God Thing, for no obvious reason. Neither Mary nor I liked boats, particularly. But a boat is a handy metaphor for the human body. The body is our vessel. We ride the waves inside of it. I’ve written a lot of poems about bodies, women’s bodies especially. The bits we like to dress up, the bits we hardly talk about. About having sex. About having children, or not. In collection four, Bone Fire, I wrote about the menopause. And in every collection, I wind up writing about when our bodies die. Sometimes slowly, sometimes all at once:

“- something to tell you. Denice –”
Call her. Eggs. Got them.
“– was on that plane. That we saw
on the news.”
Grass on fire.
Seatbelts hanging from trees.
The groceries start to slide.
Gretchen steadies them.
My voice is like ice creaking
and shattering under our feet.
(from Winter, Eggs)

When I had to title my New and Selected Poems, I returned to the body. The first two titles were puns: Body Language followed by Nudes. Both were too coy for my taste. Naked is a word I use a lot in my poems. It’s a great word. Being naked is more risky, and honest, than being nude. To my mind, the best poets allow themselves to be naked on the page. They expose themselves, not for thrills but to let the reader know she is not alone in her experiences. They move past what is expected to moments of revelation that surprise even them. Though their poems reward a second reading, there is clarity, there is bounty, in the reader’s first encounter with their work. Raymond Carver once said that his writing started to be successful when he stopped thinking of it as self-expression and instead thought of it as communication. Naked writers reach out, eager to communicate. Nude writers merely strike a pose.

So, with days to go, I changed the name of both Flood and the collection to Naked. I felt both vulnerable and, somehow, cleansed. I changed the order so that both the first and last of the 84 poems reference Anne Sexton, that beautiful diva of confessional poetry, thus underlining the forthright and self-referential nature of my work. Reader, you have been warned.

The poem’s not the polish

you tell me, your fine-boned feet

(from In Bed With Anne Sexton)

For the author photo, rather than add to the endless supply of air-brushed, sullen, black and white headshots of well-coifed writers, I chose a photo of me taken minutes after I woke up. My graying hair is unbrushed. My 52-year-old face is naked of makeup. And I’m smiling.

Finding a cover was hard. More than once it was suggested that my husband (poet Kevin Higgins) and I should do a John & Yoko, Two Virgins thing...our friends are crazy, but nice. What I love about the female statue that is on the cover is that, in her expression, we get the quality of emotional nakedness, too. She hovers between modesty and pride. She knows she belongs there, in sunlight, as surely as do the criss-crossed branches behind her. Oddly, we have so far not been able to trace the statue’s name nor location. So she is revealed, while still remaining hidden.

The Starbucks men were not hidden, and this fact filled me with a sort of wild joy. A feeling like sunlight on your skin after days of shadow and rain. These were older men, who would’ve recognised the nature of their sexuality while its expression was still illegal. They’d faced not only condemnation from individuals, but discrimination in the wider world; violence not just from ordinary thickos but from cops, too. They’d survived being told countless times they were perverts. They’d survived Aids. And here they were, healthy and fit and refusing shame. Their bodies were living poems about self-acceptance and thriving, no matter what life throws at you. That is what those two men communicated to me.

That is the power of naked.