A peek between the covers of the rare book world 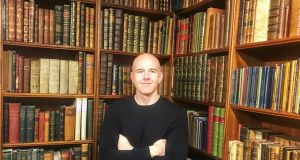 The antiquarian book trade has started to embrace the digital advances in recent years even if some may think we’re a little outdated. With the birth of the Kindle, it now seems you are either a digital reader who enjoys free cloud-space or an old school physical collector, who’s proudly displaying a library which tells people about the type of person you are.

We exhibit yearly at rhe Chelsea Bookfair in London. With a strong social media campaign from the organisers, last year we saw record numbers through the doors at Chelsea’s Old Town Hall. On opening day last November, queues were around the block from 8am. Social media is not necessary for antiquarian book dealers, but it is fast becoming a worthwhile tool for worldwide promotion. It is not hard to engage with people who invoke a passion for books and culture on platforms such as Instagram or Facebook. A plus for dealers is that we can monitor progress using web analytics to gain a perspective of our online presence.

As a book dealer, we don’t just handle rare books and are always on the lookout for material such as prints, manuscripts, maps, fine art, fine bindings, autographs and more. Most of us operate with low staff numbers and generally do everything needed to run the business ourselves, such as cataloguing, valuations, shipping, binding, and web design. It’s the type of business where retirement is rarely chosen. I know a dealer in his 80s and the thought of a great book slipping through his fingers would keep him up at night!

At book-fairs, dealers tend to sell a lot among each other and the industry is a close one where personal friendships are made regularly. The premier rare book association is called the ABA (Antiquarian Booksellers Association) and is made up of the leading 500 rare book dealers in the world. It was founded in 1906 and is the oldest organization of its kind. The book trade is going through a transition with a new generation of dealer progressing at book-fairs and auctions. They are usually qualified academics who have decided to take their knowledge in a different career path.

Many booksellers advise buying what you “like” because you’ll always enjoy what is on your bookshelves. That is true, but I would also suggest getting to know other collectors, dealers, and auctioneers to acquire more knowledge from. Concentrate on the higher end of what you plan to collect, know what you want and go for it!

A client of mine who collects rare book bindings, photography and ancient wood carvings is just as interested in adding vintage American coffee mugs to his growing collection. Generally, collectors who wait for a rare item to drop in value or try to haggle, tend to come up short as fine items will always sell fast. It will also place them at the back of a queue when a rare book they want becomes available and a book dealer has other clients lined up.

When pricing a rare book, a dealer will weigh up its demand, importance and scarcity. The condition is paramount and also its limited printing. A fine copy of Dubliners by James Joyce can, for example, sell for up to €20,000 but with a fine dust jacket can sell for up to €200,000. Authors like Joyce, Hemingway, Yeats, and Stoker usually see a steady financial increase over time. However, just because a book may be printed in the 15th or 16th century does not necessarily make it a rare one. Printed books can date back 500 years and there are many in circulation.

Sometimes a collector who has amassed a fine collection over a lifetime can donate his or her collection to a museum or institution. The Jackie Clarke Collection in Ballina, Co Mayo is a fine example.

While spending time studying in Sotheby’s New York, I learned that art can clearly be seen as a great investment, and some people have done very well. But not everything goes up, and trends can change fast. Visionary auctioneer Peter Wilson’s, the chairman of Sotheby’s in the early 1960s, created what we see at auction houses today. Before, auctions were for the trade, to buy items to sell on to private clients. He created a black-tie event, filled with atmosphere and immediacy. Keen art collectors were soon hooked on a high adrenalin activity for both auctioneer and bidder.

Some years ago I was asked to do a case study on rare autographs and I chose Éamon de Valera’s signature. His signature went through four different states, originally spelled with two Ns. Due to his age, it deteriorated over time so his signature as an older man is different. Another example of a signature changing over time is Muhammad Ali’s due to his having Parkinson’s disease. An original signature when he used to sign his name Cassius Clay is worth three to four times more than his adopted Muhammad Ali.

In recent years we have seen a resurgence in the Irish economy and with any boom and bust you will always see that reflected in art and rare book auctions. For instance, if a homeowner sees a rise in their property of €50,000, he or she can justify buying a piece of art, antique, rare book or case of vintage wine as they feel justified due to the positive equity in their home. On the flip side, auctioneers may find “sellable” art difficult in harder economic times. Last December Fonsie Mealy Auctioneers had their bestselling book auction since 2006. The highest price achieved was for copy of The Wanderings of Oisin by WB Yeats inscribed to Maud Gonne that fetched €48,000 (hammer price). Speaking to colleagues at the auction, many reflected on a return to The Celtic Tiger days.