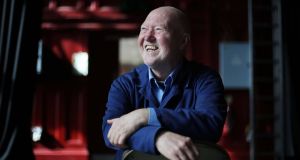 Dave Duggan: Every event, a crime for example, is like a vortex where various streams converge, none of which can be overlooked in the search for the truth. Photograph: Lorcan Doherty

I sat opposite my father, mugs of tea beside us; me, just off the four-to-12 shift in a paper-mill, driving a forklift truck; he, just off the same shift, but in a chipboard factory, where he was a supervisor. The world around us was asleep, as we talked books and politics, before making our way upstairs in the “work-bed-work” life we lived then. My father was a fan of Eric Ambler’s crime books. I read Ambler too and have continued to read crime books in the 45 years since those nights.

I remembered those nights when I visited Antibes in April. The patron of Café Felix pointed me to a corner table, when I asked about Graham Greene, saying that it was his seat. Greene often ate at Café Felix during the years he lived in Antibes. Like my father, he was a fan of Ambler. There was a photograph of Greene and Orson Welles, enjoying lunch, on the wall above the table. I was reading Greene’s Ways of Escape, which is part-memoir and part-writer’s guidebook, in which he wonders about coping with madness, melancholia, the panic and fear of living, without the benefit of writing.

I had finalised proofreading my novel Oak and Stone before I left home. The publishers were readying the text for printing. I was happy. Yet I felt slightly ill at ease. As if I didn’t believe I had done enough. I had written a story, because I try to explain my life to myself using art, in a working life making entertainments (plays, books, films), forms I have access to because my father gave me books and valued words and language. I wrote Oak and Stone, because storying is my way of knowing the world. My way of coping. And entertaining. And making a living.

If my father gave me books, my mother gave me the storying. Every incident in her life drew her to story and drew story from her. Simple, common incidents at her work in industrial laundries, stories of her family, her peers and people on the street gained depth, richness and warmth when she set to telling them. She operated in a commonplace oral tradition, not recounting the great epics of the seanchaithe, but the universal ordinariness of the lives around her, to which her accounts gave form.

I was motivated to write Oak and Stone because writing is how I make sense of the world. I make no grand claims for this, but I hope readers may draw the pleasure of the book into their own stories and sense-making.

All this in a crime book? An entertainment? Is it not mere genre writing? I read the works of Tana French, Denis Lehane, Elmore Leonard (loads of Elmore Leonard, each book read multiple times, for the joy of them), Jean-Claude Izzo and Sara Paretsky. I realise it is the form I am drawn to, not the genre. Genre is an overused, meagre word. I read The House Gun by Nadine Gordimer and I wondered if this might be a form I could use; a story, a book with a crime in it, a way of revealing the world, with empathy and solidarity.

I rely on impulses, matters bubbling up inside, manifesting as itchy and sweaty palms I rub together. Particular images persist and demand attention. Demand to be written. A lone man beside a river. The river itself, not only a metaphor, but also a concrete manifestation of this man’s life. A man with a crime story, walking beside the river, which is a living force in his life. A place of solace and of terror.

I gave the man a name; Eddie Slevin. I gave him a biography, relationships, work, a personal history in the city where he lives. I made a character of him. I wrote Oak and Stone because I had a character, a context and a back-story that kept pushing the character, trying to overtake him, like a river in spate, catching up on itself as it rushes to the sea, overwhelming itself, in a flood of confusion and action that manages to keep its head above water. But for how long?

I moved methodically, erratically, sporadically from impulse to character, to story, to form. Eddie Slevin is the lead character in a police procedural. Like many of my characters, he is an individual set in small groups – a family, a squad of former militant comrades, a workplace, lovers, colleagues and friends – bound by a major historical legacy, continuing to turn and change.

I was informed by my mother’s method of taking the ordinary and commonplace to achieve the universal. I began to write notes in a notebook. The earliest one is dated seven years ago. Progress was patchy initially. Other work – plays, novels, films – rose to the top of the “to do” list. There was a surge five years ago, when the first of a series of 10, slim A4 notebooks took the ink that ran Eddie’s Slevin’s story onto its pages. A draft was concluded by the end of 2016. Rewriting and redrafting brought the work to now; to the publisher, the printing press and to readers.

Time passes, as the river passes the office window through which Eddie Slevin views his world. He says it’s the past flowing by, in the present and, upriver, coming his way, there’s a future he may never see. The book is an effort to capture time, to hold it as “now”, for the period of the reader’s attention. It is Time, held in place, rooted in the city where Eddie Slevin lives, rooted there and reaching everywhere.

Just as we know the murders on Mulholland Drive, in Los Angeles, the gunfights on the streets of Southie in Boston, the financial dodges on The Loop, in Chicago, the drug deals on the quaysides of Marseilles, the crimes of passion among the cottages of Ballybough, so also can we know the streets and the walls of a city, where a river-bend, historical and sure, tightens its grip. So Place is secured, in Time.

Then to write incident, plot, arc and resolution. Or, if not resolution, to write Place and Time loosening their holds, as the reader and the river move on. With Italo Calvino.

Every event, a crime for example, is like a vortex where various streams converge, each moved by heterogeneous impulses, none of which can be overlooked in the search for the truth.
Oak and Stone by Dave Duggan is published by Merdog Books on May 31st, 2019