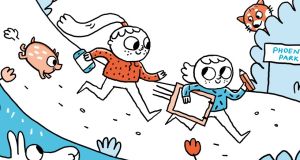 Filled with ideas for investigating the natural world, it aims to encourage scientific enquiry; “to turn anyone into a wondersmith”. The experiments are grouped thematically – investigating sound, motion, electricity, atoms and the living world – and most of them rely on everyday objects and the contents of your recycling bin. Who wouldn’t want to turn an empty crisp can into a catapult or a spectroscope? Who wouldn’t be tempted to conduct a choir of singing glasses or an orchestra of oboe straws? Shaha writes with anenthusiasm that is infectious, and the illustrations by Emily Robertson are a delicate combination of watercolor and ink, ensuring that the book remains as visually engaging as the experiments are: fizz rockets or cupcake explosions anyone?

Jennie Webber’s illustrations are the big draw in The Coral Kingdom (Words and Pictures, £12.99, 4+) a picture-poem that celebrates “the coral reef, beautiful beyond belief”. Written by Laura Knowles, the book explores the diversity of coral colonies and the cornucopia of life it shelters and sustains. The wide-ranging detail of Knowles research provides oodles of underwater life for Webber to animate in a stunning array of tones and hues. One double-page spread is a veritable search-and-find adventure. Amid the “Coral crimson, red and rose. . . camouflaged small creatures pose”. There are feathered lionfish, parachuting jellyfish, seahorses disguised as rocks, and, of course, the coral itself – an animal, not a plant, if you didn’t know – which blooms and looks as lively as any of the other the sea creatures featured in this beautiful book.

Sarah Bowie’s We’re Going to the Zoo (O’Brien Press, €12.99, 3+) also presents non-fiction material in an innovative form. It offers a fictional frame that follows two sisters, Kitty and Clara, as they take a tour of Dublin Zoo with their dad. Kitty is an animal enthusiast who loves drawing, and she sketches the animals as she goes. Clara hates everything except her mobile phone, but her sister’s passion is infectious, and eventually she starts to participate in Kitty’s project. Filled with unusual and memorable facts, Bowie gives us page by page portraits of a variety of animals in a comic, naif style that will surely encourage readers to make their own mini-catalogues on their next trip to the zoo; the young readers at my house have already started.

In Alan MacDonald’s new series Ask Oscar (Egmont, £5.99, 8+) Sam Shilling tries to catalogue all he knows about dogs – “excitable, loyal, obedient, not half as clever as humans” – in order to persuade his parents to let him get one. His parents say no, but they do not realise that dogs can adopt people. Furthermore, the clever canine called Oscar that attaches himself to Sam can talk. He also has an answer for everything, including how to get Sam’s parents to let him stay, and how to defeat the local councillor’s plan to turn the whole town into a dog-free zone. MacDonald, of Dirty Bertie fame, writes in a simple, accessible, gently comic fashion, and, thanks to the sensitive text layout, Ask Oscar is as easy to read as it is pleasurable.

Even reluctant readers will have a blast

Bjarne Reuter’s Elise and the Second-hand Dog (Wacky Bee, £6.99, 8+) features another chatty canine, who provides company and comfort to an imaginative young girl. Elise’s mother is on a bridge-building expedition in Brazil, while her father works long hours for little money, teaching the violin. Elise really wants a dog to keep her company in the family’s dingy Copenhagen apartment. The rotund dog she chooses may be ugly, but he has an unexpected gift: the gift of the gab. Elise wants to call him Prince Valiant the Great, but he would prefer to be called McAddudi, his proper name, as he informs her. Translated from the Danish by Sian Mackie, this is an offbeat tale, where the empty hours of lonely days are transformed into adventures, with everyday encounters acquiring a surreal edge. If a dog can talk, then ghosts can, of course, coexist with ordinary girls. With so many diversions, Elise hardly notices her father return home from work or that Christmas has come, and with it her mother, on the bright yellow plane, as she she promised.

A talking dog is a wacky central character, but what about a flamingo detective? Fabio: The World’s Greatest Flamingo Detective (Bloomsbury, £5.99, 8+) is “not tall or strong, but. . . he’s very, very clever”. With his hot pink lanky frame, he is a bit too flamboyant for disguises. Unfortunately his giraffe sidekick, Gilbert, isn’t good at blending in either. However, Fabio does not need to rely on physical subterfuge when he is asked to solve the mystery of the missing soprano Julia, a hippo who vanished from the stage mid-performance during a talent competition at the Hotel Royale; as one of the competition judges, he had a front row seat. This is a quirky tale written in a breezy, confidential tone, with an eye-catching design in neon pink and green. Emily Fox’s illustrations create visual templates for Laura James’ zany characters, which include a family of vultures, a chameleon comedian, and a wheezing racing rhino. Even reluctant readers will have a blast.