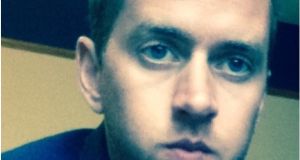 Manus Boyle Tobin: “This story was inspired by glimpses and snapshots of Dublin and its people. By the housing crisis, homelessness and isolation.”

A short story about a homeless Dublin taxi driver who sleeps in his car at the end of his shift has won Manus Boyle Tobin the Hennessy New Irish Writer of the Year award at a ceremony in King’s Inns in Dublin this evening.

The Drizzle on the Windscreen, first published in The Irish Times in January last year, also won Tobin the Emerging Fiction prize at tonight’s 47th annual Hennessy Literary Awards. Like Mike McCormack’s awardwinning novel Solar Bones, Tobin’s story is made up of a single sentence.

From Dublin, Tobin has an MA in creative writing from UCD. His play Between the Dawns was staged in Smock Alley Theatre last year. “This story was inspired by glimpses and snapshots of Dublin and its people,” said Tobin. “By the housing crisis, homelessness and isolation. By the taxi driver who had nowhere to return to when he finished his shift.”

Aaron Finnegan, a 20-year-old student from Co Louth in his second year of drama and theatre studies at Trinity College Dublin, won the First Fiction category for Just This, his first published work of fiction. “The things that grip us in stories are the things we eventually end up writing about,” he said. “For me, it’s the details. It’s the music you can find in language. It’s the genuine need to connect. I tried to capture the sense that everything is bigger than us, and things always have a way of slipping by you.”

Louise G Cole from Roscommon won the Hennessy Award for for Emerging Poetry. Cole performs her poetry at the Word Corner Café at the Dock in Carrick-on-Shannon, and with the Hermit Collective, also writes fiction and was shortlisted for a Hennessy Literary Award in 2015. “I try to mix humour with the pathos of life’s daily sadnesses: frail, elderly parents, humanity’s innate cruelty, bigotry and intolerance, displacement, forgetfulness, environmental disasters,” Cole said.

Elaine Cullen, Moët Hennessy’s market development manager, said: “Hennessy is intrinsically linked to the Irish way of life and has been a strong supporter of Irish culture for many years. The Hennessy Literary Awards is always a special evening where we get to honour some of Ireland’s best new writers. We’re proud to welcome Manus, Louise and Aaron into the Hennessy family of New Irish Writing.”

The winning Hennessy New Irish Writing short story and poems are published in The Irish Times on the last Saturday of every month.