Debussy: A Painter in Sound by Steven Walsh review: the workings of a genius

100 years after composer’s death, this biography illuminates his brave innovation 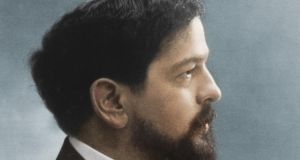 Claude Debussy brushed the formula into the bin and started from scratch. He selected chords for the inherent beauty of their sound rather than for their classical function.

Musical composition is based on a ruse. Ten seconds of music can hide 10 weeks of anguished pen-work. One lively theme can sit on the grave of 20 erased precursors. The ruse of writing points to a key difficulty for inventive artists: finding a way of writing where native inventiveness isn’t smothered by tired formulas.

Claude Debussy squared that artistic circle. He invented an individual style marrying the pleasure of free creation with the glue of formal discipline. Stephen Walsh, writing about Debussy’s piano prelude Les Sons et les Parfums Tournent dans L’air du Soir (Sounds and Perfumes Turn in the Evening Air), says: “There is not a single bar remotely stifled by tradition, convention or any other concept imposed from outside.” The work’s a litany of broken harmonic rules; it’s also a masterpiece. When heard on the radio these days, Debussy’s music might seem obvious, but it only came about through boldly abandoning the time-honoured rules of how you were supposed to write.

For 150 years, the development of classical music had been bound to a particular idea of tonality (that is, the state of being in a key). Generally speaking musical compositions were goal-directed, presenting an initial theme, a second contrasting theme, their development and conflict, and finally a resolution in the home key – the musical equivalent of a three-act structure. Although Wagner’s music made this tonal basis ambiguous and stretched, ultimately Wagner, too, fell back on that tension-and-release formula.

Debussy brushed the formula into the bin and started from scratch. He selected chords for the inherent beauty of their sound rather than for their classical function. His genius was to develop extended forms on that basis without recourse to classical tonality’s push and pull. The first step was composing songs, setting poems by Baudelaire, Verlaine and others in ways that allowed the music to linger in a static fashion on striking images: colourful moments “without past or future, endlessly relived”. With lapidary precision, he extracted Wagnerean chords from their larger context and made them self-standing. “There’s no such thing as theory,” Debussy told his teacher Guiraud. “Pleasure is the only rule.”

At the Paris Conservatoire, “harmony was based on grammar-like rules of progression and combination that had remained essentially unchanged since Bach; form was that of a classical tradition handed down like the Ten Commandments from Mount Horeb”. Debussy often ignored these elementary compositional instructions (“all humbug”) in favour of interesting-sounding, “presumably deliberate” errors. The apprentice composer was duly chastised for being “preoccupied solely with creating the strange, the bizarre, the incomprehensible, the unperformable” and for neglecting “the importance of precision in design and clarity of form”. After shifting from piano studies to composition, he avoided the company of fellow composers, favouring that of similarly outré poets and painters. In general he was careful about influences, learning from Wagner and Russian music without allowing their influence to exert too much force. “Essentially an uneducated adolescent”, he taught himself about art and developed a witty prose style (he wrote criticism for La Revue blanche and other publications).

In other ways, Debussy was a typical artist. He was “perennially insolvent”, subsisting on morsels and cadging money from wealthy friends. He was influenced by offbeat sources, notably the Javanese music he heard at Paris’s 1889 world fair. He was spurred on by competition with peers like Ravel. He was drawn to eccentricity (a strange Argentinian man who lost the run of himself at a performance of Debussy’s music was subject of the French composer’s admiration). He treated lovers shoddily (his first wife Lilly Texier attempted suicide). Everything else came second to art, the great love of his life.

“I have never been able to live in the reality of things and people,” Debussy wrote, “from which comes this invincible need to escape into myself, into experiences that seem inexplicable because I reveal there a person nobody knows, and which is perhaps the best of me.”

Walsh’s biography ties in with the centenary of Debussy’s death, and it’s squarely oriented on the music. Accounts of works such as Pelléas et Mélisande, La Mer and the piano Préludes, though understandably not totally free of technical jargon, give the general listener useful points of orientation. Walsh’s primary focus on the music means the biography is at times light on anecdote and psychological analysis, but it’s a fair trade-off. “The century of aeroplanes has a right to its own music,” was one of Debussy’s bons mots. Walsh’s narrative, without neglecting how Debussy’s art chimes with its historical contemporaries (Monet’s Impressionism, Mucha’s Art Nouveau, Mallarmé’s Symbolism), is a bravura account of how the force of genius can in any age create the new and unforeseen.