Children’s books round-up: A picturebook which is the perfect Christmas gift 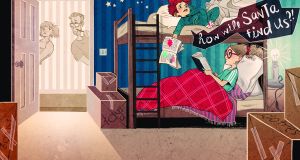 How will Santa find us? from writers Shane O’Brien and Stephen Rogers

What have your children asked for this Christmas? The children in How Will Santa Find Us? (Good Cop Good Cop, £16.99) want nothing more than a roof over their head, so that Santa Claus can visit them on Christmas Day. Writers Shane O’Brien and Stephen Rogers bring to life the struggles of homeless families in a rhyming story that sees the children’s parents imaginatively distract them from the family’s problem.

As they pack up their boxes they are “robots from the future, filling up our robot car with gadgets and computers”; couch-surfing on a friend’s sofa is an opportunity to conquer “Cushion Mountain”; sleeping in the car is sleeping on safari. The story is illustrated by an ensemble of Ireland’s best contemporary picturebook makers, including Lauren O’Neill , Peter Donnelly, Yasmeen Ismail and Fatti Burke. Despite their distinct styles, they manage to create a visual throughline that helps carry the story along to its heartwarming finish. How Will Santa Find Us? has been created as a fundraising initiative for Focus Ireland, which makes it an even better reason to bestow it as a Christmas gift to the little people in your life.

There is another altruistic moral at play in Abi Elphinstone’s modern fairytale The Snow Dragon (Simon and Schuster, £6.99, 5+), which breathes freshness into the tropes of the classic Christmas story. Phoebe is an orphan who lives in Griselda Bone’s Home for Strays, where she awaits her “Miracle Day”: the day a kindly family decides to bring her home; she is the last child at the orphanage. After a chance encounter with a snow dragon, she is treated to a transformative vision of the world, which leaves its own miracle in its wake. Elphinstone’s story is full of original, vivid descriptions. Griselda, who is determined to banish childishness, has shoulders that “gobbled up her neck.” Phoebe loves the “whispery flumping sound” of snow. Fiona Woodcock’s delicate pointillist images evoke the ethereal magic of both the original seasonal story and its setting.

Shirley Hughes’ Angel on the Roof (Walker Books, £12.99, 5+) also boasts a miracle. When an angel lands on the roof of Lewis Brown’s house, he is the only one who notices. However, the silent seraph has a strange effect on all the residents of Number 32 Paradise Street. The Sharples have stopped arguing, teenager Dan has taken his headphones out of his ears, and Miss Babs Ridezski has started singing, albeit in a foreign tongue. Here, Hughes’ gold and blue ink illustrations have a particular kind of urgency that lends itself well to the hallucinatory lilt of this Christmas story. “Blurred like a quick-pose life drawing”, they capture the movement of the angel as she brings Lewis on a journey that reminds him of the strength that can be found in difference.

Rory, the smallest reindeer in Santa’s herd of helpers, is also celebrated for his uniqueness in Natasha Mac a’Bháird’s Reindeer Down! (O’Brien, €14.99, 3+). He might not be strong enough to pull the sleigh, but he can slip down a chimney quicker than even the Big Man himself. When Dancer gets injured en route to Dublin and the sleigh is grounded, it is also Rory who finds a solution. He directs the travelling party to the Phoenix Park, where there are more than a few Irish deer happy to help. Illustrator Audrey Dowling brings the reader on a visual journey through the Irish landscape, offering aerial views of The Giant’s Causeway, Newgrange and Aras an Uachtaráin, as well as some very cute, smiling reindeer.

Christmas is an especially good time to share some of the best books of the year with young readers. 2019 saw the launch of Scallywag Press, who offered some gorgeous new titles to bookshop shelves, including Jon Agee’s The Wall in the Middle of the Book (Scallywag Press, £12.99, 3+), which blends an accessible moral fable about inclusion with a pertinent political subtext that parents will enjoy, and Cori Doerrfeld’s The Rabbit Who Listened (Scallywag Press, £12.99, 3+), which boasts gently expressive images and a template of tools for resolution when faced with inevitable disappointments. Publisher Stripes also brought attention to detail in their textured hard-backed publication of Two Sides (Stripes, £7.99, 6+) by Polly Ho-Yen, which uses shared narration to tell the story of fall-out and reconciliation between best-friends Lulu and Lenka.

Felicita Sala’s Lunch at Number 10 Pomegranate Street (Scribe, £16.99, all ages) shares the cultural traditions of an international community, with a unique blend of picture-book narration and recipes that children will enjoy testing with their parents. Mary Murphy’s What I Like Most (Walker Books, £12.99, 2+) is also about fostering the parent-child relationship. The chorus perfectly evokes the circular nature of the child’s imagination, while Zhu Cheng-Liang’s striking, romantic paintings are full of amusing detail. Sophie Dahl’s Madame Badobedah (Walker Books, £12.99, 5+), with glorious watercolour illustrations from Lauren O’Hara, is full of exotic detail, as donkey-loving Mabel spies on the most mysterious resident at the Mermaid Hotel.

Thomas Taylor’s atmospheric Malamander (Walker Books, £6.99, 9+) is also set in a hotel, where the chief Lost and Founder, Herbert Lemon, is tasked with finding and killing the mythical sea-serpent who has been tormenting the town. Ben Clanton’s Narwhal series (Egmont, £5.99, 6+) also has an underwater emphasis, with its graphic form and comic content proving particularly attractive for reluctant readers.

It is also worth remembering how attractive non-fiction titles can be for burgeoning bibliophiles who struggle with reading. Some of the year’s best include The Great Irish Science Book by Luke O’Neill (Gill Books, £24.99, 8+), which traverses vast galaxies and zooms in on microscopic details of the world around us, and John and Fatti Burke’s Countess Markievicz: The Rebel Countess and Brian Boru: The Warrior King (Gill Books, £9.99, 6+), which marry accessible condescended fact and dynamic graphic imagery. Santa’s sleigh will be weighed down with such an inspiring selection.