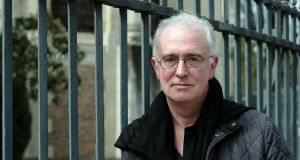 Joseph O’Connor has been shortlisted for the Costa Novel Award for Shadowplay, a week after winning the Irish Novel of the Year award for his biographical fiction based on the life of Dracula creator Bram Stoker.

O’Connor, whose 2003 novel Star of the Sea has sold more than a million copies, received the 2012 Irish PEN Award for outstanding achievement in literature and in 2014 was appointed Frank McCourt Professor of Creative Writing at the University of Limerick. The judges said of Shadowplay, which explores Stoker’s relationships with actors Henry Irving and Ellen Terry: “An atmospheric novel, offering a thrilling insight into the creative minds of writers and actors.”

His rivals for the £5,000 prize, whose winner will be announced on January 6th, are Middle England by Jonathan Coe; Confession with Blue Horses by Sophie Hardach; and Starling Days by Rowan Hisayo Buchanan.

The poetry award shortlist features two debut collections by Mary Jean Chan and film programmer and archivist Jay Bernard, both recently selected by Jackie Kay as two of the ten best BAME writers in Britain; Paul Farley, a former winner of the award; and John McCullough.

The Costa awards is the only major UK book prize open solely to authors resident in the UK and Ireland and also, uniquely, books published across five categories: first novel; novel; biography; poetry and children’s book.

To be eligible for the 2019 Costa Book Awards, books must have been first published in the UK or Ireland between November 1st, 2018 and October 31, 2019 and their authors resident there for the previous three years.