Secular democracy was to be a friend of the church, and human rights a common vocabulary 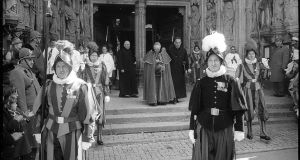 During the Second Vatican Council Cardinal Journet, pictured here in Fribourg in 1965, remarked that the church would in future work, “by battling errors with the forces of light, not by force of arms” . Photograph: ATP/RDB/Ullstein Bild via Getty Images

The long and often complex history of human rights reveals entanglements and processes that reach back into a premodern history that engage with how international law is formed, the meaning of sovereignty, the uses of diplomacy and political action, and indeed the place of religion, in restraining or exerting influence on the exercise of political power.

Locating a narrative that reveals the origins of human rights as substantive and normative values for our political lives in the 21st century is indeed a turn into uncharted waters.

Human rights are inherently cosmopolitan even if they are most effective at the domestic level in securing rights or as instruments for advocating for change. They are a moral placeholder for the languages of goodness and justice, solidarity and responsibility, even while this branch of international law is charged by legal scholars such as David Kennedy to be a civic religion, or by Marti Koskenniemi as a secular faith, or even by Samuel Moyn as a blissful utopia, which displaces religion wholesale. Nevertheless, the idea that human rights could be a secular faith that religious believers could invest in curiously becomes pivotal to the whole enterprise in explaining their roots.

The drafting and writing of the Universal Declaration of Human Rights, with strands of both Enlightenment and natural law thought were not effortless compromises of diffuse traditions but a difficult fusion of diverging opinion on the future of our world following two devastating world wars.

Those who had witnessed the capitulation of European democracy in the mid-1930s interpreted it as a crisis in the emerging political project of democracy. Among Catholic intellectuals the new political form of the state required elements drawn from a prolonged reflection on political power reaching back to Augustine, the scholasticism of the Middle Ages, and the 16th-century jurists of Salamanca.

In his 1936 book, Integral Humanism, the philosopher Jacques Maritain developed a thesis of a minimal standard of agreement devoted to the common practical task of politics under the banner of a “secular democratic faith”. It was possible to suspend doctrinal allegiances to propose a humanism with which both Christians and others could find accord, and provide foundations for newly emerging nation states.

Maritain’s was a significant contribution to the drafting of the Universal Declaration of Human Rights. This language secured human rights within Catholic political reflection and gave a sense of continuity to historical tradition. The consequences of such a universal declaration were unknown, and initially sidelined, when outstanding projects of postwar reconstruction and decolonisation took centre stage. However, the thesis of integral humanism, bound up with human rights ideas, began to shape the contribution of Catholics after the war in national constitutions and transnational political projects.

An emerging cosmopolitan Catholicism would view national sovereignty as diffused through civil society intermediary associations, and transnational organisations, which included a role for human rights instruments to check the folding of the state into the domain of the civil sphere.

Catholic intellectuals had since the late 19th century developed a blueprint of social justice, coined by the Jesuit Luigi Taparelli, to counteract the excesses of market capitalism, and overreach of socialism on property rights. To reduce the political isolation of Catholics in Europe they also developed themes about subsidiarity and corporatism to give meaning to Pope Leo XIII’s thesis of the confessional state.

The idea of a diffused sovereignty, contrary to the strong state theory of Thomas Hobbes, and reflective of a long tradition of “two swords” or two powers in the political domain, an Imperium and Sacerdotium, gave substance to how this theory of political Catholicism would take shape.

The natural law tradition those Catholics identified became the backbone for a civic or secular faith and they held there exists a prisca theologia or a philosophia perennis, an acknowledgement of a natural law that preceded the establishment of procedural rights in international law, laws that are not alone granted but are a recognised set of rights common to humanity. This cosmopolitan revision of an historical tradition fit for 20th-century modernity saw the potential for human rights to become an indirect power within democracy, and built on natural law it would be an instrument to restrain or guide the exercise of political power in the future.

Postwar Christian democracy as a political movement guaranteed a conservative political agenda, while retaining a secular faith in intermediary institutions like the European community and human rights courts. The experience acquired in constructing inter-war corporatist constitutions in Europe, which had applied ideas about human rights as natural rights, with essentially pre-political foundations, were applied to the development of human rights as a universal cosmopolitan project.

The Irish Constitution could be considered a peripheral laboratory for an emerging ideal of a cosmopolitan Catholicism. It reveals the overlapping of two Catholic political theories, one stemming from a strictly Leonie thesis, and a second belonging to an emerging cosmopolitan Catholicism that made civil society its domain. While the thesis of a confessional and corporate state dominated this process, they produced the integration of a new kind of constitutionalism responding to and restraining the emerging of a centralising state structure in 1930’s Europe.

During the Second Vatican Council Cardinal Journet remarked that the church would in future work, “by battling errors with the forces of light, not by force of arms”. Secular democracy was to be a friend of the church, and human rights a common vocabulary to battle political and social wrongs. That vision is precarious today, with some wishing for a revision of the social compact so painstakingly assembled after the second World War.
Leonard Taylor’s Catholic Cosmopolitanism and human rights is published by Cambridge University Press