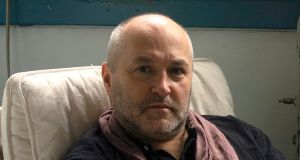 “I’m a bit of a magpie,” Colum McCann said, sheepishly gesturing around his office at Hunter College. He has taught creative writing there for 13 years, and in that time has appointed his space with plenty of mementos: old family photographs, a self-portrait his daughter drew in neon crayon, a framed poster of what he said were among his friend Frank McCourt’s last words to him. (“So, Frank, what will you confess?!!” McCann asked. “Pride springing from virtue. But not from virginity!”) But the keepsake he was looking for during an interview earlier this month, which he can’t believe he’s lost, is a napkin.

McCann remembers what it said: “Harness the power of your grief.” It was given to him by two fathers whose lives radically altered his own, and who became the central characters in his latest novel, Apeirogon, out on February 25th.

Many Palestinians often feel a sense of solidarity with the Irish.  ‘We have the same history of conflict’

The book is a fictionalised account of the men, one Israeli, one Palestinian, whose daughters were killed near Jerusalem 10 years apart. Rami Elhanan, who is Israeli, lost his teenager Smadar to a suicide bombing that occurred while she was shopping with friends in 1997. Abir, the 10-year-old daughter of Bassam Aramin, who is Palestinian, was fatally shot by an Israeli soldier in 2007. An apeirogon is a shape with an infinite but countable number of sides, and over the course of the book’s 1,001 chapters – a nod to One Thousand and One Nights – McCann delves into the two men’s lives, sometimes writing in their voices.

Aramin and Elhanan met in 2005 through Combatants for Peace, an organisation that aims to end the occupation of Palestine, and they have become close friends. They are now involved in the Parents Circle - Families Forum, an organisation for Israelis and Palestinians who have lost family members in the conflict.

McCann met the men in 2015, when he first visited the region with his storytelling nonprofit, Narrative 4. He had been interested in Israel and Palestine’s history since talking with George Mitchell, the former US senator who helped broker peace negotiations in Ireland and the Middle East, and who appeared in McCann’s continent- and century-spanning 2013 novel TransAtlantic.

“If anything dilates my nostrils, it’s the sense of some sort of difficulty,” McCann said. “I knew I was completely ignorant of what was going on there, and I thought I’d like to try and explore.” He wound up spending a week in the region. “I was sort of priding myself on the fact of being able to deal with everything – I’ve seen Northern Ireland, I’ve done this before,” said McCann, who grew up in Dublin during the Troubles. He listened to Elhanan and Aramin speak in Beit Jala, a Palestinian town, and sobbed as they told their stories.

Lisa Consiglio, a co-founder of Narrative 4 who has known McCann for years, was also there. Hearing them, she said, was a “shock to our system that had already been shocked very much.” She had never seen McCann so visibly moved. “Subconsciously, I think I knew he had a book at that moment,” she said.

McCann left knowing he wanted to write about the conflict. He returned several times over the next four years to conduct research and interviews for Apeirogon. The book has generated pre-publication interest: Steven Spielberg’s company, Amblin Partners, bought the movie rights, and an Arabic version of the novel is in the works.

Apeirogon, like other books by McCann, interweaves real people with imagined conversations, scenes and other details of their lives. McCann’s National Book Award-winning novel, Let the Great World Spin, for example, uses the high-wire artist Philippe Petit as a launching point, while another of his novels, Dancer, imagines the life of ballet dancer Rudolf Nureyev.

In a moment when the publishing industry is grappling with which stories are told and by whom, it is a striking choice. “We’re in this territory of the real is the imagined and the imagined is real,” McCann said of this project. “I think people wouldn’t have trusted it as much if it wasn’t real.”

Elhanan’s and Aramin’s stories are well documented; their grief has entered public consciousness. They’ve been the subject of films, and have travelled the world talking about their loss and their conviction that “we can’t build a state on the ruins of our kids,” as Aramin said in an interview. Both have found salvation in the work, a way, Elhanan said, also in an interview, to “give meaning to my life and meaning to my loss.”

Neither man hesitated when McCann approached them about his idea. They trusted him as an artist, they said, recognising that the book, even as a work of fiction, would amplify their message. “In our first meeting, Colum was crying like a little kid,” Elhanan (70) said. “His ability to show emotion shows that he’s a really fine man with heart – it’s the basic of all basics, the ability to show emotion and to show compassion.” McCann’s background also helped, Aramin (56) said, because many Palestinians often feel a sense of solidarity with the Irish. “We have the same history of conflict.”

Apeirogon can make for excruciating reading. McCann devotes sections to “the mushroom effect,” or how the heads of suicide bombers are nearly always separated from their torsos, and the damage that rubber bullets cause. Readers are in the ambulance with Aramin and his critically injured daughter, waiting two hours and 18 minutes for traffic to clear to reach another hospital. When Elhanan remembers the sound of the rollers in the morgue, readers can imagine it, too.

McCann’s fictionalisation of such wrenching stories is likely to raise questions among readers, particularly in a story that unfolds in a charged political conflict where virtually every fact is up for debate. (One example: Israeli authorities initially suggested that Aramin’s daughter was killed by Palestinians throwing stones; an Israeli judge later ruled in civil court that she had been shot dead by an Israeli soldier.)

“It’s very difficult to talk about your pain or to read about your pain,” Aramin said. Both he and Elhanan have been reading it slowly. Yet neither father asked McCann to change anything. “I told him from the beginning, ‘It’s your book, not mine,’” Elhanan said. “It’s accurate, it’s emotional, but I don’t consider it to be my story.” He knows that it may invite criticism, he added, “but the worst already happened. I have nothing to fear.” – New York Times