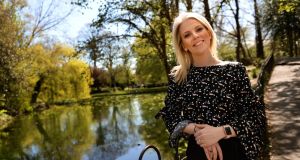 Laureate na nÓg Sarah Crossan won the Carnegie Medal previously for One in 2016 and was shortlisted twice: for The Weight of Water in 2013 and Apple and Rain in 2015. Photograph: Dara Mac Donaill

Laureate na nÓg Sarah Crossan and Kit de Waal are among 10 authors longlisted for the 2020 CILIP Carnegie Medal for their books Toffee and Becoming Dinah. Crossan has won the prize previously for One in 2016 and been shortlisted twice for The Weight of Water in 2013 and Apple and Rain in 2015. Becoming Dinah is de Waal’s YA debut. Her adult debut, My Name is Leon, won Kerry Group Irish Book of the Year in 2016.

Blessington Book Store in Co Wicklow, Philip’s Book Shop in Mallow, Co Cork and Woodbine Books in Kilcullen, Co Kildare have made the Irish shortlist for the Independent Bookshop of the Year at this year’s British Book Awards.

Lucy Foley, author of the bestseller The Hunting Party, will be in conversation with Rick O’Shea in Eason’s, O’ Connell Street, Dublin, on Monday, February 24th, at 6.30pm, to mark the release of The Guest List, her new thriller.

Picador is to publish The Running Book: A Journey through Memory, Landscape and History, a work of non-fiction from John Connell, bestselling author of The Cow Book, in October. Structured around a marathon run in Longford, it examines what it is to be alive and what movement can do for a person, but Connell also looks at colonialism and the effects of British imperialism in Ireland and worldwide, and how postcolonial people can free themselves from their histories.

Trinity Centre for Literary and Cultural Translation, 36 Fenian Street, hosts a conversation between author Donal Ryan and his German translator Anna-Nina Kroll on Monday, February 24th, at 6pm. Admission is free but bookingessential.

International Literature Festival Dublin is looking for Ireland’s next literary star. If you’re a writer looking for a literary agent and advice on getting your book into print or your script to the screen, this is your chance. International Literature Festival Dublin and Writing.ie are inviting six top literary and screen agents and two top London editors to Smock Alley Theatre on Saturday, May 23rd. Find out more here.

Tatty by Christine Dwyer Hickey is this year’s Dublin One City One Book choice. Dermot Bolger sets out why it is such a significant work of fiction. Claire Connolly, general editor with Marjorie Howes of Irish Literature in Transition, a new series of six books from Cambridge University Press addressing Irish writing from 1700 to 2020, explores how recognition and understanding of what we now know and love as Irish literature has evolved over the centuries.

Our reviews include Christopher Kissane on The Volunteer: The True Story of the Resistance Hero who infiltrated Auschwitz by Jack Fairweather, which last month won the Costa Book of the Year Prize; Niamh Donnelly on Sex and Lies by Leïla Slimani, translated by Sophie Lewis; Mic Moroney on Keenie Meenie: The British Mercenaries Who Got Away with War Crimes by Phil Miller; Seán Hewitt on The Year Without Summer by Guinevere Glasfurd; John Self on Actress by Anne Enright; Henrietta McKervey on The Temple House Vanishing by Rachel Donohue; Philip Ó Ceallaigh on Independence Square by AD Miller; Declan O’Driscoll on Ananda Devi’s The Living Days, translated by Jeffrey Zuckerman; Sarah Gilmartin on Big Girl, Small Town by Michelle Gallen; and Declan Burke on the best new crime fiction by Arlene Hunt, Nicola White, Gerard O’Donovan, Malachi O’Doherty and Jean Kwok.

Just One More Question: Stories from a Life in Neurology by Niall Tubridy is this Saturday’s Irish Times Eason offer. When you buy the paper in any branch, you can also buy a copy of the bestselling medical memoir for just €4.99, a saving of €7.