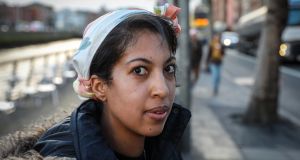 Naakai Dzole Addy: 'I wished I had conveyed my rage five days before that, when a tall man in a Doolin pub rested his entire palm on my scalp and let it sit. He breathed on me, not with me.' Photograph: Crispin Rodwell

The Store Street Garda who took down the details was kind and soft-spoken. “Tell me what happened,” she requested.

I told her what I could in my detached state; my friend, a classmate, filled in the rest. She had been there too and saw everything I missed in the thick of it. The Garda said words I’d never heard before but would hear again and again in the days after: “I’m sorry that happened.”

When you’ve grown up in a racist country, you come to feel these things just before they happen. Not soon enough to stop them from happening, but just in time to get that feeling – the one that alerts you that someone else’s eyes are lingering on you as you move.

It’s a stomach-dropping, throat-tingling awareness you might get if you walked down a dark alleyway at night, and you heard a group of men snickering just to your left, getting closer. It’s a flash of knowledge – far too late – that you are no longer in possession of your space.

I could feel it on a Wednesday afternoon in late January, standing with my friend at a Bachelors Walk traffic light. I could not see, until too late, where it came from.

A pale hand found its way to my braids, right where they gathered across my chest.

I traced the cheerful voice to a woman shorter than me. She was white and casually dressed. She gripped the braids with a steady hand, running it all the way down to the curly tips, right at the level of my navel. The intricately braided strands pulled away from my scalp; I bristled at the unsettling weight of a part of me lodged in a stranger’s grip. Her eyes and her smile were wide, delighted.

My hair was blessed, and I only wanted sacred hands on it.

A week before Christmas, I sat in a sanctuary deep in a blackish borough. A small, sterile New York space, but a space I knew was ours. The woman I would allow to touch my hair folded her brown hands together and beckoned me up. Upward on a squeaky-clean elevator, down on a tan leather couch.

For 10 seconds, her oiled hands rested on my scalp. The only movement came through her breath, deep inhales and lengthy exhales. This was not: you give me money and I will attach synthetic fibres to your scalp. This was: you give me your trust, and I will give you back yourself.

There wasn’t time to explain this, six weeks later on Bachelors Walk. So, I reached my arms up, palms out.

“Do. Not. Touch. Me.” I said it loudly. The volume and punctuation of each word moved me back a few steps. I searched my whirring brain for something “nice” to say, something that wouldn’t earn me the angry black woman label. Something like, Just kidding; I don’t care; it’s fine; whatever; not a big deal; have a nice day.

“Do not touch someone you do not know,” I said instead.

There came the scrunching up of her pale face, the welling up of tears in the corner of her eyes, the delicate shaking of her chapped lips. I took in her long, stringy ponytail while she turned to a man beside her and began weaving a tale of black aggression.

Her companion, his skin flushed and agitated, marched toward me. I didn’t register his words or mine, just the volume of us both.

I repeated myself in as many iterations as I could manage. Maybe: “Don’t touch my hair,” instead of “Why are you touching a stranger?” or the much simpler, “Get the f**k away from me.” I did say – I know I said – “Get out of my space.”

Even as I stood my ground, I tried to push my rage down and in, where I thought it belonged. The woman continued frothing at the mouth, spittle projecting out of her lips, soaring through the air, and landing somewhere on my face.

I thought about what it meant to have a stranger’s saliva on my skin. Did it sink into my pores, or slide its way into my mouth? The possibility that their violence would linger on me, in me, forever, was untenable. Whatever I said or did next pushed them away from me. They stumbled into the crosswalk. The man swivelled around, his posterior facing me as he turned his head and bit out his indictment. “F**king n***er.”

The heat rose in me, up through my chest, into my lungs, creeping up until it found its home right behind my ears.

Did I hear him correctly? The last syllable sounded unfamiliar in an Irish accent. Typically I heard it in a suntanned California drawl. Nih-gerr, with the Rs extended for what felt like an eternity.

Yes, I heard him correctly, because there came the smirk that always came when white people used that word. That smirk said, ‘I got you and there’s nothing you can do about it’.

For a second, I lost my footing on the dry sidewalk beneath me.

I stood in the middle of the road. A long line of cars sat beside me while I screamed. “What did you call me?” Adrenaline propelled me forward, outward, louder, bolder. “I will f**king kill you,” I said to them both as I moved to the edge of the bridge.

The man came back, outrage in his eyes, in his stance, in his flailing arms. I moved at him like a boxer. He ran a little then came back at me, yelling more obscenities. I shuffled forward and stood my ground. I did it again and again.

The woman screamed something about the injustice of it all; I threatened to throw her in the Liffey. I threatened it until she and he disappeared around the south side of the bridge.

There was no time on Bachelors Walk to show that my hair was blessed, so I had to show them it was mine. I wished I had conveyed my rage five days before that, when a tall man in a Doolin pub rested his entire palm on my scalp and let it sit. He breathed on me, not with me.

“My girlfriend loves your hair. We were debating is it real or is it fake? I think it’s fake.”

I wanted to lean over the booth and rest my hands on his bald head, his thick neck, wherever he didn’t want it, just to see how he liked it.

“Thank you.” I forced a smile, brushing my hand over my scalp as if I could reverse time.

I felt the revellers around us fall silent and look on; I saw my companions pretending not to see. He looked down at me, he and his friends waiting for me to give them what they felt they deserved.

I opened my smile as far as it would go and dug the heel of my right boot into my left shin. I said: “That’s between a lady and herself.”

Laughter all around me; I hated myself. I hated all the years it took me to develop a litany of gentle deflections instead of learning to defend myself.

An American girl – white – whom I’d just met, looked at me with wide eyes.

“Are you okay?” she’d asked and I had to bite my tongue and hold my breath to keep from crying.

Every day until that day at Bachelors Walk, I’d felt the weight of that man’s rough hand on my head, like it rested there while I slept. Every night, I’d cursed myself for not being quicker, meaner, prettier, classier, anything that would make white people see that I was human.

“Maybe I need another degree?” I wondered, tucked into my tiny Dublin bed at the end of that weekend. Never mind that that logic hadn’t freed my parents from being treated like a zoo exhibition. Don’t piss off Dr Addy, the father of a childhood friend said on multiple occasions. He’s from Africa: he’ll get his lion and tiger friends to come and kill you.

In Doolin, at Bachelors Walk, later while filing a police report, and still now: I felt the cold, rain-slicked plastic of my California primary school’s blue lunch tables. I slid back decades and I saw those big, corn-fed boys crowding around me, their posteriors on the tabletop, their feet secured in expensive sneakers and wedged beside my thighs.

White and Asian, but mostly white. They called themselves Anarchy, though I knew they couldn’t spell it. I kept my head down, my eyes fixed on one small square of tartan fabric, and tried not to breathe too loudly.

“I see something really nasty. Disgusting. The dirtiest thing I’ve ever seen.”

They never looked at me. Not when they traipsed behind me and laughed out the slur. Not while chanting it low and gleeful in the middle of class. At least the man on the bridge looked at me.

On our way back from the police station that night, my friend and I stopped by Spar to pick up a few essentials. We were just off Bachelors Walk again, but I did this thing I’ve done every time I’ve been assaulted. I tick a box, as though I’ve earned a reprieve from further violence for the rest of my life.

We’d almost made it to the main road when we saw a stumbling, slurring man gaining momentum behind us. I tried to block him and his words out, but we both heard “black” and “Go back to England”.

We looked at each other with open-mouthed shock, speed-walking until we made it back inside. Our backs against a heavy wooden door, hyper-ventilation turned into laughter.

We laughed at home, too, knees drawn firmly to our chests, hands gripping our knees until the knuckles were white, eyes tracking the darkness outside the window.