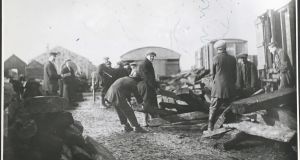 A relief train being unloaded at a railway station in the west of Ireland during a famine in February 1925. Photograph: Hulton Archive/Getty Images

A little over three years ago, I began a new novel, set in Sutton, Co Dublin, in the early 1920s. I feel a close connection to that era: my mother was born in 1920, and grew up in Sutton, and I spent part of my early childhood there, a time I still remember.

As well as diving into the published history of the day, I immersed myself in Dáil reports, newspapers, tramway timetables, military details, and even hospital records. I was greatly surprised by what I discovered. What seeped out from those early days of Irish independence, described by the novelist, Patrick McCabe, as “mute and mysterious”, was an extraordinary crisis caused by natural disasters that threatened the core viability of the fledgling Irish Free State.

Today, as we face into our own epic crisis, we can suddenly appreciate the magnitude of the challenge with which our forebears were also presented.

Three months after the end of the Civil War, in late August 1923, a general election was called. Within a few weeks, a minority government led by WT Cosgrave, the leader of Cumann na nGaedheal and outgoing president of Dáil Eireann, was formed, with Kevin O’Higgins as minister for home affairs. This, the fourth Dáil, was beset from the outset by scant economic resources, the fear of another civil war and devastating natural disaster.

Ten thousand anti-Treaty supporters, viewed by O’Higgins and the new government as a threat to democracy, were in jail. No one could be absolutely sure that the fragile Free State could survive. The maintenance of law and order often teetered on the brink. Although An Garda Síochána had been founded in early 1922, by the time of the fourth Dáil an alternative, but lethal, quasi-police force was operating out of Oriel House, a building on the corner of Westland Row and Fenian Street in central Dublin.

Home to a largely unregulated murder squad, Oriel House was dedicated to eliminating perceived enemies of the new Free State – anti-Treaty supporters known to the pro-Treaty side as Irregulars. During this period, at least 25 Irregulars were killed extra-judicially, prominent among them, Noel Lemass, a captain in the IRA’s Dublin Brigade and brother of Ireland’s future fourth taoiseach. In November 1923, Oriel House was hastily disbanded and its members dispersed.

Against this feral political background, there emerged a natural disaster that threatened the ability of the newly independent nation to continue. In 1923 and 1924 the harvests were disastrous. Unrelenting rainfall caused potatoes – still the main food source of the rural poor – to rot in the ground. Crop yields collapsed. Grazing lands, especially west of the Shannon, were swamped as rivers burst their banks. It became impossible to find fodder, which led to animal deaths in large numbers. To make matters worse, it was not possible to dry out turf, the main source of fuel for many country people.

In July 1924, The Freeman’s Journal illustrated the depths of the crisis in Connemara, one of the worst hit regions, “75% of the people had now no potatoes, their chief diet for the last 2 months, and the harvest prospects were never worse in living memory. There is no employment.” In August, when farmers should have been preparing for the harvest, the Meath Chronicle reported “a famine condition is imminent as bad as 1847”.

Through the early autumn of 1924, local and national newspapers contained similar predictions of mass starvation. Fin Dwyer, author of the Irish History Podcast, who has highlighted this hitherto little-known disaster for modern readers, says, “These dire predictions of mass starvation were not just the work of newspaper editors prone to sensationalism. In September of that year the local Cavan branch of Cumann na nGaedheal complimented the Anglo-Celt newspaper on ‘timely exposure of the true state of affairs . . . the shadow of famine is overspreading the outlook of the poor peasantry’. By October, the Southern Star reported that people in Connemara were said to be surviving on seaweed and shell fish.”

The crisis deepened. The Connacht Tribune reported that on New Year’s Eve 1924, a doctor was called to the home of Michael Kane on Omey Island, a tidal island situated near Claddaghduff. The Tribune informed its readers that the physician found “Kane . . . lying on the stone floor near a small turf fire. His emaciated face showed only too plainly the cause of his illness. The man was starving and too far-gone to benefit from medical attention. Two children, of three years and two years, respectively were lying by the fire trying to keep warm. They too were weak for want of nourishment.” Kane died two days later in Galway hospital.

In January and February, newspapers in Clare and Galway reported the deaths of 10 people, predominantly children, from starvation or starvation-related disease. In February 1925, The Manchester Guardian published photographs of a women and five children, huddled in a cabin, under the caption: “THE FAMINE IN IRELAND”. The view of president WT Cosgrave was more subdued. He described the situation of distress as “considerably greater than normal, but comparison with 1847 is, I am glad to say not justified. There is no question of famine in that sense”.

As Dwyer puts it, “Using the worst famine in modern European history as a benchmark . . . illustrated the depth of crisis.”

A fresh shock was then lobbed into the middle of an already dire situation. On February 11th, 1925, the Irish cabinet reviewed a telegram received from the editor of the Boston Globe newspaper seeking official clarification on whether there was a famine in Ireland. Senator James Douglas, who in 1922 had been appointed by Michael Collins to chair the committee which would draft the Constitution of the Irish Free State, had attached the following note to the Boston Globe telegram: “The present propaganda in the United States, alleging that there is a famine, will do great harm to our credit in every way unless it is countered.”

The crisis facing an impoverished, inexperienced nation still struggling to find its feet must have seemed overwhelming. Famine, so deeply imbedded in the Irish consciousness, would represent the ultimate failure. By April 1925, the Soviet daily, Pravda, was reporting on the situation while the Manchester Guardian claimed that 750,000 people were at risk.

In Dublin, the instinct of the government was to downplay the impending crisis while at the same time reacting to it by practical means. An estimated £500,000 in direct emergency relief – in today’s money more than £30 million – was provided, as coal supplies were shipped into the west of Ireland to replace the saturated turf. The Irish Times reported in February that $25,000 had been sent from the Catholics of New York, and, in May, that an English chocolate maker had offered to send one tonne of chocolate to the children of Connacht, but had withdrawn this offer when it was learned they duty would have to be paid on the donation.

Speaking in the Dáil at this time, the Minister for Agriculture, PJ Hogan, asserted: “There is no abnormal distress in the West this year. I say that definitely and deliberately.” The government’s priority seems to have been to keep the real situation from the wider world in order to protect its already meagre lines of credit.

As 1925 unfolded, a return to the horrors of the mid-19th century was averted. To the immense relief of government, a greatly improved harvest took place in the autumn of 1925. The sun shone, potatoes and turf were harvested, animals had fodder, hay was saved. A massive tragedy was avoided by a benign reversal in the weather, and the crisis was gratefully forgotten.

The challenges facing our country today in the teeth of a global pandemic must seem far greater than those faced almost a century ago. And yet, both then and now, the fabric of our society was all but overwhelmed by matters largely outside our control. It should bring us hope and comfort to realise that despite the very bleak reality of the time, we came though it as a nation. The danger passed. We survived. We went forward into better times.

Peter Cunningham’s new novel, Freedom is a Land I Cannot See, will be published by Sandstone Press in June.