Cork in the 1970s: Breeding ground for a school of poets 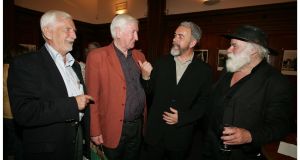 If you are interested in literary history, you may have heard of the Bloomsbury set, or the Beat Poets. Closer to home, you may be familiar with the Belfast Group, a term used to refer to poets such as Seamus Heaney, Michael Longley or Derek Mahon, who met and critiqued each other’s poetry under the watchful eye of Philip Hobsbaum during the early 1960s.

In other literary movements, the determining factor can be a manifesto, such as the Surrealist Manifesto written by André Breton in 1924. Other writers are associated with a literary magazine – this was the case for the Irish language poets, such as Michael Davitt, Nuala Ní Dhomhnaill, Liam Ó Muirthile, Gabriel Rosenstock, who published in INNTI, a journal founded when they were still students in University College Cork at the end of the 1960s.

The examples I have quoted reference a location, an individual or a definite aesthetic stance, yet some cohorts of writers seem to fly under the radar, and resist classification.

One such cohort is formed by a group of poets (Greg Delanty, Theo Dorgan, Seán Dunne, Thomas McCarthy, Gerry Murphy, Gregory O’Donoghue, Maurice Riordan) who attended UCC in the 1970s, slightly later than the INNTI group.

My new book, English Language Poets in University College Cork 1970-1980, explores the factors that enabled this group of poets to emerge onto the scene. Many of them came to the university convinced of their own poetic calling – this is the case with Thomas McCarthy, for instance, who had a poem published in The Irish Times before leaving school. Yet, vocations alone do not suffice to explain the flowering of poetry in a city that had for so long been associated with the short story.

UCC at the start of the 1970s benefited from the influx of students who arrived in third level via Donogh O’Malley’s 1967 Education Act. The student poets, in those heady days of the early 1970s, were not focused on vocational concerns, but revelled in the exploration of knowledge for knowledge’s sake, immersing themselves not just in lectures, but in the vibrant artistic scene that flourished in Cork at the time.

For Cork city itself was thriving, with full employment, and a sense of confidence that had ebbed in the lean post-war years. Nor was there any sense of opposition between town and gown. Poetry workshops were held within the university walls, but The Long Valley on Winthrop Street also served as an unofficial headquarters for poetry in Cork.

The Cork Examiner published a monthly poem; the Examiner journalist Robert O’Donoghue (father of Greg) was always on hand to slip impecunious poets a fiver and encourage them in their endeavours. The variety of bookshops, especially the Lee Bookshop, offered a bounty of second-hand books; at the instigation of William Wall, it also printed the poetry pamphlets of some of the debutant poets. The Mercier Press published poetry anthologies that circulated widely in shops throughout Ireland. The forerunner to the Triskel Arts Centre, the Tubular Gallery, offered a venue for readings.

The atmosphere in UCC itself was propitious. The Irish department in UCC, for instance, in a daring move, appointed the poet Seán Ó Ríordáin to a position equivalent to that of creative writer on campus, years before such a practice became widespread in Irish universities. His talismanic presence was matched by that of Seán Ó Riada in the music department.

Poetry in Ireland in the 1970s was dominated by the northern poets and the arrival of Montague, an emissary from Ulster poetry, was greeted with enthusiasm. McCarthy recollects his arrival in the following terms: “When Montague arrived in Cork in the early seventies, he was bursting with energy: energy radiated from his massive physique, always clad in a massive overcoat, filling space with the same kind of weight as Ted Hughes.”

Montague and Lucy were both convinced of the importance of the poetic way of life. Together they revised the university syllabus in English, placing contemporary poetry front and centre. Outside the lecture halls, they monitored, mentored and adjudicated workshops. The younger poets were introduced to the rites and rituals associated with the poetic life: the submission of manuscripts, the role of literary magazines, the view of poetry as an art form where one had to work one’s apprenticeship. Paul Durcan was also a student on campus at the time; his place as an established poet was a spur to his contemporaries.

The poets also chose exemplars that were local. They invited Michael Hartnett to speak at the literary society. Like Lucy, they were convinced of the importance of Patrick Galvin. Delanty and Robert Welch would issue Galvin’s New and Selected Poems from Cork University Press in 1996. As a generation of poets, they share Galvin’s social engagement and Hartnett’s passion for translation, combined with his abiding interest in the Irish language.

Long after they left UCC, the poets continued to work together on editorial and poetic projects, the most notable of which was the Cork City of Culture Translation project, where poets from the EU accession states in 2005 were translated by Cork poets.

In an interview, Montague acknowledged the talent of the cohort: “Overall I would have to say that the students I had for the next half-decade were probably the best students I ever had.” The American academic, Thomas Dillon Redshaw, has called them “the glittering generation”, an epithet that appeals to a certain Cork sensibility.

Clíona Ní Ríordáin is professor of English at the Sorbonne Nouvelle in Paris where she teaches Irish literature and translation studies. English Language Poets in University College Cork 1970-1980 is published by Palgrave Macmillan