Browser: An insider’s account on the state of British police

Brief reviews of An Event Perhaps, a Biography of Jacques Derrida and Ralph Steadman: A Life in Ink 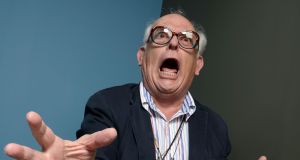 Forced Out
By Kevin Maxwell
Granta, £14.99
Looking back at police behaviour at the Toxteth riots, the Hillsborough disaster and the Stephen Lawrence murder, Kevin Maxwell says: “It was as if the universe was telling me: Don’t join the police.” He did – and the universe was right. One of 11 children of a mixed-race, working-class background, as a black gay man he seemed ideal to counter the “institutional racism” the 1999 Macpherson report found within the police. He entered the force for the noblest of motives, but after experiencing entrenched prejudice, open racism and homophobia for a decade, he’d had enough and took the police to an employment tribunal. He won, but at terrible personal cost, with a shocking police counter-campaign against him. Part moving memoir, part incisive analysis, Maxwell’s insider’s account doesn’t inspire confidence in the possibility of police reform. – Brian Maye

An Event Perhaps, a Biography of Jacques Derrida
By Peter Salmon
Verso
On October 21st 1966, an event occurred. At the end of an international symposium featuring key figures in the structuralist movement, a little-known, Algerian-born, French philosophy teacher stood up to speak. By the end of Derrida’s 30-minute speech, deconstruction was born. An Event Perhaps is a rigorous intellectual biography of the controversial figure, renowned by some as an intellectual rock star, and by others as the architect of post-modern and post-truth societies. Salmon aims to demystify an often misunderstood and misappropriated philosopher by laying out the major themes of his work and by placing this work in context of the influential thinkers that underpinned his writing. He succeeds in making accessible the work of a notoriously difficult writer. – Brigid O’Dea

Ralph Steadman: A Life in Ink
Abrams & Chronicle, £45
Alongside his work American Presidents from 1973, Ralph Steadman scribbles: “Looking at some of these older pieces, it’s incredible how the message still holds, but the landscape really should have changed.”

It’s both a positive note on the possibilities of satirical art, and a negative one on the perpetual pollution of the political system.

A Life in Ink is a whacking great lavish testament to an artist whose work spans six decades, and, impressively, Steadman’s art remains an elbow in the face of authority. Like his dear friend and comrade-in-gonzo, Hunter S. Thompson, he not only bought the ticket to take the ride, the two of them captured and defined it. A special book that fans, old and new, will return to again and again. – NJ McGarrigle