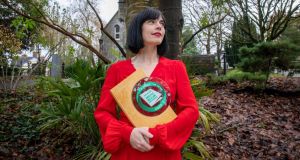 An Post Irish Book of the Year 2020: ‘I accept this award with deep gratitude to each and every one of you. Míle buíochas libh go léir,’ says Doireann Ní Ghríofa, author of A Ghost in the Throat. Photograph: Clare Keogh

A Ghost in the Throat, Doireann Ní Ghríofa’s strikingly original combination of essay and autofiction, has been named An Post Irish Book of the Year 2020.

The titles competing for the accolade were the category winners in this year’s An Post Irish Book Awards, a fortnight ago, including Strange Flowers, by Donal Ryan, A Light That Never Goes Out, by Keelin Shanley, Champagne Football, by Mark Tighe and Paul Rowan, Old Ireland in Colour, by John Breslin and Dr Sarah-Anne Buckley, and Diary of a Young Naturalist, by Dara McAnulty.

A Ghost in the Throat, Ní Ghríofa’s prose debut, which won the Non-Fiction Book of the Year category, weaves together the narrator’s own relationship with pregnancy and motherhood, and the life of the 18th-century poet Eibhlín Dubh Ní Chonaill.

In her review of the book for The Irish Times, in September, Sarah Gilmartin wrote: “As she looks after her young family – four boys and a baby girl – in various rental accommodations around Cork, Ní Ghríofa sets herself the onerous task of writing a new translation of the 18th-century poem Caoineadh Airt Uí Laoghaire (The Keen for Art Ó Laoghaire) by Eibhlín Dubh Ní Chonaill. Ní Ghríofa isn’t the first to translate the poem... but the way she weaves this years-long process with tales from her own life results in a truly unique project that comes alive on the page.”

Ní Ghríofa says she is overjoyed to have won. “A Ghost in the Throat is a telling of my story, but it also tells the story of Eibhlín Dubh Ní Chonaill, and I’m so thankful to all the readers who have taken both of us into their hearts. I accept this award with deep gratitude to each and every one of you. Míle buíochas libh go léir.”

One of Ireland’s most successful bilingual poets and essayists, Ní Ghríofa has published collections in both English and Irish, including Clasp, Oighear and Lies. Born in Galway, raised in Clare and now living in Cork, she was awarded the Rooney Prize for Irish Literature in 2016.

Today’s victory is the third time in five years that a title published by the independent Tramp Press has won the Irish Book of the Year Award, after Notes to Self, by Emilie Pine, in 2018, and Solar Bones, by Mike McCormack, in 2016.

John Treacy, chairperson of the awards, says: “A Ghost in the Throat made an immediate impact in the Irish book trade on publication. It’s an amazing thing for an established poet to suddenly produce such an accomplished and interesting piece of work as her prose debut. It’s a beautifully produced book, too, and Tramp Press deserve great credit for their unerring eye in seeking out original material to publish. Congratulations to Doireann, a worthy winner of the An Post Irish Book of the Year.”