‘People say it must be hard to parody Cummings and Gove. And I say yes’ 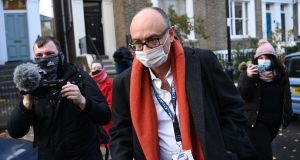 The Cummings Files is a blisteringly funny and bizarre account of Dominic Cummings’s worldview. Photograph: Daniel Leal-Olivas/AFP via Getty

In lockdown, Arthur Mathews is taking consolation from nostalgia. “I’m watching a lot of Talking Pictures at the moment,” he says. “It’s my favourite channel, it’s brilliant. Although they have to put warnings before every programme stating each show contains outdated racial stereotypes. I love it.”

Mathews is engaging company, whether discussing the recurring tropes of 1970s dramas – which come up several more times in our conversation – or laughing along to an interviewer quoting back punchlines he wrote decades ago.

Like most people, I became aware of Mathews in the 1990s, when he rose to prominence for creating the seminal comedies Father Ted and Big Train with his fellow Hot Press alum Graham Linehan. While the latter has recently stepped back from comedy to focus on being banned from social-media platforms, Mathews has remained in work, teaming up with Matt Berry to create Channel 4’s cult-comedy favourite Toast of London and writing several books in various guises. The most recent, The Cummings Files, is what brings us together over Zoom.

“I guess it’s my fourth bogus book,” he says, “as in, it’s purporting to be by someone else. Before this I did the Toast book, Angry Baby – which was a toddler’s response to the economic crash in 2008 – and Well-Remembered Days,” 2001’s uproarious memoir of an elderly Catholic crusader from Dublin.

“In January I was asked if I wanted to do something about Cummings, and I didn’t think I’d get a book out of it. But then Cummings legged it off to Northumberland and they rang me again, so I had to go for it.”

The finished document, part fictional journal, part imaginary blog archive, is a blisteringly funny and bizarre account of Dominic Cummings’s worldview, filled with diary entries, political tracts and drawings by Mathews, a seasoned cartoonist for Hot Press and NME. Spoofing someone like Dominic Cummings is an easy venue for predictable gags, but the book rejects that path to dwell on more unexpected absurdities.

Those expecting Have I Got News for You-approved chuckles will instead find a prime minister addicted to bouts of nervous hoovering, charts in which Karl Marx’s wages are adjusted for inflation so they can be compared to those of Claudia Winkleman, and breathlessly surreal accounts of Cummings’s time in Russia as a paramilitary enforcer.

All of which might make some of the book’s unexpected insights all the more uncanny. Early in the diaries, Mathews imagines Cummings’s first impression of Carrie Symonds, which reads as eerily similar to the adviser’s much-publicised ill opinion of the first lady of Downing Street. Two weeks after the book was published, Cummings’s real-life texts about Symonds were leaked and the most powerful man in the UK was sacked.

“No,” he says, laughing. “Although the timing was odd. There was a Covid-style chart you can track which showed his media presence, and he got a real bump just as all this was happening. So was the book good timing or bad? I don’t know.”

I note it’s redolent of Father Ted that some of the show’s silliest tropes – giant pyramids of sandwiches, unintelligible locals, a nationwide network of priests who all know each other intimately – read to British viewers as absurdist fiction and to Irish people as cannily observational fact.

“Well, yeah. Particularly the fact that all priests know each other – that is absolutely true,” he says, before adding that the frequently surreal behaviour of priests was barely exaggerated either. “I had two uncles who were priests. Uncle Paddy was old and stayed in Ireland. He was more conservative, but Uncle Tom ran an Irish centre in Birmingham and he was a bit trendier.

“Once I was in his parochial house and he said: ‘Would you put a tape on? The Strokes one.’ I said: ‘The Strokes?’ And he said: ‘Yeah, put the Strokes tape on.’ So I put it on and it started playing and the first thing I heard from the speakers was: ‘If you have a relative who is recovering from a stroke...’” Mathews breaks off to laugh. “There was always stuff like that happening.”

Denied the presence of a Tory special adviser in his immediate family, Mathews was reduced to internet research for The Cummings Files but claims this was a limited endeavour. “I read his Wikipedia entry,” he says, and, after a pause, “I read his blogs for about five minutes. Well, that’s not true. I read them a lot, but I couldn’t get much from them.” Another pause. “Too clever for me, perhaps. He’s different... a different personality than I am.”

More generally, is it hard to create a fake news text about people who are so willing to bend the truth themselves? “There’s a lot of things that aren’t true these days,” Mathews says. “From every side, to be honest. I mean that excuse of driving to test his eyesight...” Another pause for understated emphasis. “That does seem a bit far-fetched.

“But they know if they do it for long enough, it takes too much energy for their interrogators to keep at them, so it works. There was another time that [Michael] Gove had to do the same thing, defend the utterly indefensible, and you can see him on TV doing it in real time. Everyone says it must be very hard to parody that stuff and I say yes. Yes, it is.”

For 2021, Mathews hopes to resume some form of normal life and is keeping mum on a potential fourth series of Toast and the long-gestating musical Pope Ted, which is still in the offing, at least in theory. “It’s on the long finger now, but it’s written and has been rehearsed, so it could happen,” he says, before adding “if theatre ever returns.”

He won’t, however, be drawn on what the future holds for Cummings himself, newly liberated from government and with his whole future ahead of him. “Maybe he’ll write his autobiography now,” Mathews says.

I suggest he could write Mathews’s diary as payback. “Got up, laughed at my own jokes, watched Talking Pictures.” There’s another laugh. “Yeah, that is about it, to be honest.”

The Cummings Files is published by Faber & Faber