Books for the beach – and the brain – this summer 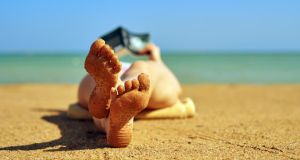 So far this year I’ve enjoyed the debut novel by Rebecca O’Connor, He Is Mine and I Have No Other, about secrets, youth and silence in rural Ireland, Emilie Pine’s frank and visceral essay collection Notes to Self, and An American Marriage by Tayari Jones, which depicts the wrongful imprisonment of a young black man in the American south, and the effect of this trauma on his marriage. I’m looking forward, over the summer, to reading The Lost Letters of William Woolf by Helen Cullen, a debut about “letter detectives”, as well as The Great Believers by Rebecca Makkai (a novel set in art-world Chicago during the Aids epidemic), Sharp by Michelle Dean (a group biography of “women with opinions”, including Mary McCarthy, Joan Didion and Hannah Arendt) and the novel My Sister the Serial Killer by Oyinkan Braithwaite, described as “satire meets slasher”, and set in present-day Nigeria.

I know it was published last year, but all the same I am going to choose Anthony Powell, by Hilary Spurling. I have just discovered Powell’s immensely subtle and entertaining novel sequence A Dance to the Music of Time, and am glad I did, before it became too late and I had to quit the dance floor. So closely does Powell mirror his life in his novels that often while reading Hilary Spurling’s biography I felt I was back, blissfully, in his fictional world.

1 Gardaí believe men in Cork murder-suicide chose to let woman survive
2 Varadkar rejects allegations he acted unlawfully in sharing draft GP contract
3 Cork shootings: Mourners at Mark O’Sullivan’s funeral told of devoted and caring son
4 Jack Nicklaus’ Trump endorsement leads to avalanche of dismay
5 Supermarkets compared: How Dunnes, Lidl, Tesco and M&S measure up
6 Covid crisis: 416 new infections bring October total to almost 25,000
7 The Irish living life for less in sunnier climes
8 ‘This could be Belfast in 1968’: How political conflict in the US could descend into violence
9 The West has failed – US and Europe have made a mess of handling the crisis
10 Fintan O’Toole: Defeat for Donald Trump will shape our world
11 Sean Connery the man has died. Sean Connery the indestructible legend lives on
12 Richard Ford: America could fail. I have never felt this way before
13 Explainer: The GP contract talks at the centre of Varadkar controversy
14 Jennifer O'Connell: Ireland's pandemic compliance is extraordinary
15 First full moon on Halloween night since 1974 will be rare ‘blue moon’
16 James Bond actor Sean Connery dies aged 90
17 Six Nations - France v Ireland: Kick-off time, TV details, permutations, team news and more
18 David McWilliams: A plan to put Ireland’s 200,000 vacant buildings to use
19 Ireland, France or England? Who needs what to win the 2020 Six Nations
20 Kite surfer dies after getting into difficulty off north Dublin beach
21 Ireland ‘outperforming almost all European countries in controlling spread of Covid-19’
22 Two hundred Irish retailers for all your online Christmas shopping
23 Sinn Féin MLA Catherine Kelly resigns over Covid-19 grants controversy
24 World Handicap System: What is it? How does it work? Will my handicap change?
25 Most face masks to protect against coronavirus do not meet standards
26 Surprised Donegal shopper discovers stowaway tarantula
27 Nigella Lawson: ‘I feel insecure if I don’t know what I’m going to eat’
28 WHO raises alarm over widespread and enduring damage of Long Covid
29 Revenue publishes list of companies tapping State for wage support
30 Power restored to most homes in wake of Storm Aiden cuts
31 Coney Barrett unfairly targeted in attacks over childcare
32 Cosy and colourful: this Wicklow cottage is a décor delight
33 The perfect traditional Irish barmbrack
34 US election: Trump using executive orders to reshape fabric of America
35 Greek Orthodox priest wounded in shooting at church in Lyon
36 UCD medical students withhold fees in protest at fee increases
37 Cork shootings: ‘Devastation was impossible to imagine’, funeral hears
38 Kanturk farm shootings: A timeline
39 Paul Flynn: My take on a famous pork shoulder feast
40 Even if Biden becomes president, there’s no turning back
Real news has value SUBSCRIBE