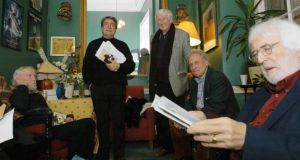 In an article written for this newspaper in January, novelist and poet Mary O’Donnell described The Cambridge Companion to Irish Poets as representing “a startling inventory of omission”. Part of Cambridge University Press’s long-standing series, the companion has already elicited a significant backlash for its representation, or lack thereof, of women writers (women made up 13.3 per cent of the book’s included poets). This has resulted ultimately in a broader analysis of the gender imbalances of past anthologies of Irish writing by Lagan Online, alongside a collective commitment to achieving parity. Through the project Fired!, poets and academics can now agree to remove their participation from literary events and publications that do not make “a good-faith effort to adequately represent the contribution women make to literature and literary criticism”. Needless to say, this sort of controversy, and this sort of direct action, rarely accompanies the publication of a critical handbook.

Part of the problem, as Dawe himself has written, is that editorially the space for the Companion is squeezed by other Cambridge University Press publications. The existence of Justin Quinn, ed., The Cambridge Introduction to Modern Irish Poetry (2008), for example (in which 14 out of the 66 poets discussed were women), and Matthew Campbell, ed., The Cambridge Companion to Contemporary Irish Poetry (2003) (in which 21.4 per cent of the contributors were women), meant that Dawe’s Companion had to take a broader historical sweep. Dawe has reasoned, in The Irish Times, that there is a much smaller number of canonical women poets pre-1945, and thus his collection includes significantly fewer women than men. Perhaps, had Cambridge University Press allowed more space for an introduction to the volume, Dawe could have clarified these issues and contextualised the methodology and critical approach of the Companion; however, in the short preface and introduction to the book, this is not really addressed.

However, it would be a shame for this controversy to detract from a collection of what are individually insightful, accessible and often probing introductions to the chosen poets. The scholarship in this volume is undoubtedly excellent, and Dawe has made some surprising and exciting pairings – Louis de Paor, who traces Seán Ó Ríordáin’s “relentless search for a unitary self”; Maria Johnston, who subtly guides the reader through the “atmosphere of bewilderment” surrounding Medbh McGuckian’s work; and a particularly impassioned essay by Alan Gillis on Paul Durcan, who “teaches that poetry is everywhere, that nothing is not extraordinary”.

The book begins with a skilful introduction by Seán Lysaght on Edmund Spenser, which handles the controversial Elizabethan poet with careful balance, and from there onwards moves through 30 poets, and through both the Irish and English language traditions of the island over the centuries. It finishes up finishing up with Nuala Ní Dhomhnaill, who John Dillon describes as writing from “a dream space”, highlighting her mining of folklore and engagement with contemporary affairs. It makes a welcome stop with Fran Brearton’s essay on the War poet Francis Ledwidge, which uses Heaney’s elegy In Memoriam Francis Ledwidge as a lens through which to view the various facets of the earlier poet’s work.

There are, of course, omissions; and each reader will have their own sense of who deserved inclusion, and who should perhaps have been excluded. Brian Merriman, for example, or Eibhlín Dubh Ní Chonaill, are notable absences in the 18th century; Charlotte Brooke in the 19th, and Maire Mac an tSaoi in the 20th. There is little poetry from the Revival, either. Perhaps the model of Mark Richardson’s Cambridge Companion to American Poets (2015), which included some broader thematic essays and could therefore accommodate a range of minor or non-canonical voices, might have proved effective.

That said, Dawe’s volume is admirable in its balancing of complexity and readability: it guides us through, poet-by-poet, introducing us not only to the key works but to paratexts, lesser-known works by contemporaries, and complex socio-cultural environments. It is part of the unexpected charm of the book that, as Dawe writes in his preface, the essays are alive to the “resounding resonances and conversations between individual poets and their lives and times”.

The flair of the scholarship here means that these are by no means cautious introductions: they probe the tradition and pick apart the biases of posterity. Though the overall picture is marred by an imbalance, each essay is a careful guide. As Dawe notes in his introduction, the world of Irish poetry has already altered beyond the temporal confines of this Companion, providing new insights into gender and geography and politics, shifting and correcting the tradition. As always, a new generation is at work.