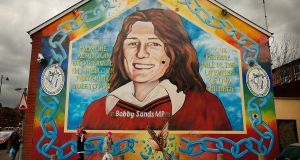 A mural depicting Bobby Sands in the Falls Road in Belfast. He died in prison after a 66-day hunger strike which he beganb on March 1st, 1981. Photograph: Peter Macdiarmid/Getty Images

Forty years ago, 23 men in Long Kesh/Maze Prison decided to embark on a second hunger strike in order to achieve five demands in an attempt to effectively regain political prisoner status. Ten men would die as part of this campaign.

An earlier mass hunger strike in 1980 by men in the prison as well as women in Armagh Prison had not achieved these demands. This time the prisoners took a staggered approach, striking on a person-by-person basis, which helped to build local, national, and then international sympathy for their David against Goliath story.

Versions of their story are still discussed and debated today. But what did we really learn from the 1981 hunger strikes?

A glance at how popular memory presents the 1981 hunger strikes can demonstrate a number of points around how we think about the past and how we act in the present. First, an element of British ignorance about what was happening in Northern Ireland and why. This is illustrated through repeated missteps in Westminster’s Brexit negotiations and an apparent failure to consider ramifications for the Belfast/Good Friday Agreement.

Second, that the past is debated fiercely in order to protect the agendas of the present. Republican division over the legacy of the hunger strikes continues, as witnessed through annual commemoration events.

Finally, that commemoration itself can be an exclusionary act, favouring one group and forgetting others that were impacted by these events. As through the Decade of Centenaries, we begin to grapple with the “historical as a contemporary unwillingness to acknowledge” the complications and implications surrounding partition, commemorations of Troubles events have always demonstrated the divisiveness of the past and the present. While President Higgins has called for ethical remembering, it is too soon to know if his words will be heeded.

In 2016, Dr Alison Garden and I worked with Martin Doyle to create the Irish Times Hunger Strikes microsite: hosting more than 20 articles by scholars on different aspects of the hunger strikes. This microsite has seen global recognition for the work of scholars on this period of the conflict. Subjects covered included pieces about the hunger strikes and suicide, poetry and the strikes, media representations, the lack of female representation in film depictions of the strikes, masculinity, back channel negotiation, and militant loyalist reactions.

The series attempted to broaden our discussions about the wider impact of the strikes on society, not only in Ireland, but wider still. They remain a resource, not only for those who lived through this time, but for those born after the strikes, or even after the signing of the Agreement, who have no first-hand knowledge of the Troubles but who seek understanding.

The 35th anniversary saw a burst of new material on the strikes: numerous academic articles and books, a graphic novel, and a feature length documentary. Since that commemoration, writing on the strikes has slowed. Burgeoning scholarship on the ‘Troubles’ has focused on how the conflict impacted on children, love, the LGBTQ+ community, desire, feminism, and the home – subjects previously under-researched and excluded from the traditional gunmen vs. politicians narrative of the conflict. The success of Anna Burns’s Milkman, which received both public and critical engagement, exposes a desire for these other perspectives. Perhaps this shift reflects changes in society too: a realisation that there are other stories that deserve to be heard and read in the wider context of the conflict. The pandemic in a way has made this recent academic conversation more accessible to a wider audience as scholars speak on these topics not only in lecture rooms but over Twitter, blogs, YouTube, Instagram, and Facebook video.

As discussed here five years ago, our understanding of the hunger strikes largely focuses on the 10 men who died. Yet 61 people, 34 of them civilians, died during a period of intended heightened violence outside the prison caused, in part, by protests ignited in response to the hunger strikes. A factor rarely mentioned.

What about Paul Blake, shot dead by UDA/UFF gunmen as he walked down the street in Ardoyne? John Smyth and Andrew Alfred Woods, RUC officers killed by an IRA landmine planted under their car near Loughmacrory? Or Nora McCabe, a Catholic woman slain by an RUC plastic bullet in disputed circumstances some hours after the death of hunger striker Joe McDonnell? Their names are recorded on the pages of Lost Lives but little seen elsewhere. Commemorations can reveal how society often places greater value on remembering certain deaths rather than all.

The 40th anniversary of the 1981 hunger strike will be observed differently this year, and only partially as a result of the Covid-19 global pandemic. While the commemorations will still surely nod to the triumphant sacrifice of Irish past, will they strike the same tone as other years? Republicans, divided themselves over the peace process, use these anniversaries to demonstrate how the past should justify their version of the present. Brexit has further complicated lingering divisions. Ironically, recent decisions, or lack of them, at Westminster could end up playing a more significant role in efforts towards a united Ireland than events like the hunger strikes.

In the concluding piece for the Hunger Strikes microsite, Dr Garden and I questioned what commemoration could look like in 2081. Perhaps this pandemic has forced us to look to the future of commemoration practices much sooner than expected.

For example, the controversy surrounding Bobby Storey’s funeral this past summer, which saw republicans break government Covid-19 guidelines by gathering at his burial, will result in more attention being given to commemoration  in a digital or individual space. We know the Derry Graves Association, alongside the 1981 Hunger Strike Commemoration Committee, plan to sponsor two fundraising runs to help finance the refurbishment of the H-Block monument. However, the runners may now participate separately in light of Covid-19 concerns. A new organisation, Stailc 81, created by “a collective of working class people” in an attempt to create an “independent” republican commemoration of the strikes, promises virtual events and a website filled with information, posters, images, and press statements from the time.

It remains to be seen how the 40th anniversary of the hunger strike will be repurposed for republican groups today. We may see online events and digital archives replace the physical, in person, and tangible events of the past, perhaps the way forward for commemoration in a new age.

Maggie Scull published The Catholic Church and the Northern Ireland ‘Troubles’: 1968-98 with Oxford University Press in 2019. She is currently an adjunct professor at Syracuse University London