The British press presented the strikes as a publicity stunt or propaganda rather than a political protest, showed little sympathy and focused on threat of violence in England 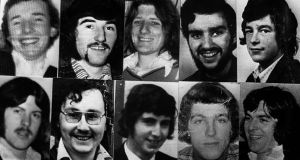 Ten Irishmen starving themselves to death in the Long Kesh/Maze prison in the early 1980s made headlines worldwide. In Britain the hunger strikes provided more ammunition for the press to attack the IRA and defend the British government’s policy in Northern Ireland. At the same time, by focusing the attention of the British press away from the IRA’s bombing campaign in England and onto Northern Ireland, the hunger strikes introduced an Irish voice, albeit limited, into coverage of the Troubles.

The British press, unsurprisingly, showed little sympathy towards those perceived as “H-block terrorists” and were instead more concerned about whether their deaths would signal renewed violence in England. The majority of newspapers supported the Conservative government’s stance towards the status of republican prisoners, echoing Margaret Thatcher’s assertion that “a crime is a crime, is a crime”. In an editorial written four days before his death on May 5th, 1981, The Sun described Bobby Sands as “a common criminal who is being treated better than he deserves”. Even The Guardian, despite criticising Thatcher’s handling of the protest, agreed that, in principle, “her policy has been correct”.

From the United States to the Soviet Union there was widespread condemnation of the decision to allow an elected member of the British parliament to starve himself to death over “wearing his own trousers”. The world’s press put pressure on the British government to yield to the hunger strikers’ demands.

As the Sunday Times’ European correspondent, Keith Richardson, observed, “general European impressions range from pig-headed Thatcher obstinacy, through scandalous misgovernment to outright genocide. In other words, it could not be worse.”

The British press dismissed such international concern as a result of IRA propaganda, an opinion shared with the British government. As the Guardian reported, the death of Bobby Sands “inflamed uninformed international opinion against Britain”. The Daily Telegraph frequently presented its coverage of the hunger strikes alongside that of similar protests worldwide. In doing so, it sought to reduce the significance of the protest, claiming hunger strikes were a regular occurrence in many countries.

The mainstream press presented the hunger strikes as a successful publicity stunt designed to attract support for the republican movement, both internationally and in Northern Ireland, rather than a protest for the right to be treated as political prisoners. As the Daily Mirror argued on April 22nd, Sands’ fast had “already recruited acid-throwing teenagers to the junior ranks of the IRA. His death would enlist more”. Following his death, the Daily Mail published a cartoon by Stanley McMurtry (Mac), depicting Sands’ gravestone bearing the epitaph “Bobby Sands IRA propagandist and martyr”. Portraying the hunger strikes as IRA propaganda was designed to minimise the political significance of the protests. The cartoon also drew on the well-established symbol of the republican martyr.

Throughout the Troubles, British newspapers were preoccupied with the fear that by creating martyrs out of its members, the IRA would galvanise further support. When it became apparent that the hunger strikers would achieve a level of martyrdom, the British press attempted to play down the death of these men. In an editorial published in April 1981, the Daily Mirror complained that “the death of Sands would add another martyr to a history which has a surplus of them”. This nod towards earlier republican martyrs such as the Lord Mayor of Cork, Terence MacSwiney, who died in Brixton Prison after 74 days on hunger strike in October 1920, reinforced the newspaper’s view that these protests were, and always had been, a futile act.

The Daily Mail’s cartoon of Sands’ grave bore the caption, “Who died that others might die”, a pastiche of the biblical claim that Jesus died so others might live. In contrast to the selfless nature of Christ’s sacrifice, the newspaper suggested that the hunger strikers’ strategy of martyrdom would provoke further violence, increasing human suffering.

In the coverage of the hunger strikes, the British press consistently called for the “forgotten victims of Ulster” to be remembered. An article entitled “Two faces of Ulster”, which appeared in the Daily Mirror on May 16th juxtaposed coverage of the funeral of second hunger striker Francis Hughes with that of Julie Livingstone a 14-year-old girl killed by a plastic bullet aimed at protest demonstrators in Belfast. The paper suggested that the hunger strikes encouraged violent demonstrations that placed innocent by-standers at risk whether from the demonstrators themselves or the British army reacting to them.

In a similar way, the Sun’s editorial on May 1st followed its discussion of Sands’ imminent death with coverage of the funeral of PC Gary Martin who died in a booby-trap bombing in Belfast. The report also focused on the grief of mothers Rosaleen Sands and Rhoda Martin over the death of their respective sons. By equating Rhoda’s suffering to that of Rosaleen’s, the Sun portrayed both mothers as victims of IRA terrorism. This idea of victimhood was reinforced by the Daily Mail’s cartoon of Sands’ grave surrounded by tombstones each inscribed with “murdered by the IRA”. By depicting Sands buried amongst IRA victims the cartoonist seems to imply that Sands too was murdered.

Paradoxically, the British press portrayed the hunger strikers as both cold-blooded terrorists and victims of the IRA themselves. Reporting on Sands’ funeral, Daily Mirror journalist John Edwards observed that “it was a pathetic end for a man who never played more than an average part in the deadly moves called by his IRA masters”. Similarly, in July the Daily Telegraph described the hunger strikers as “pawns in the terrorist game”, claiming that:

“The answer is plain: the strikers are under the command of the leadership of the Provisional IRA represented at the Maze by Brendan McFarlane who, himself fortified by regular meals, orders their behaviour. Threats, no doubt are freely delivered to mothers and sweethearts who are suspected of encouraging resistance to these demands. There is indeed a reign of terror at the Maze; but it is maintained by the IRA.”

The press questioned the rationale behind the hunger strikers’ actions and the validity of the protest. It reinforced the idea that, through sacrificing their own members the IRA, were acting counter-intuitively.

The slow deterioration of human beings on hunger strike drew press coverage away from the IRA’s bombing campaign in English cities and onto the situation in Northern Ireland. Rather than reporting the violence at face value, British newspapers began to explore how people in Northern Ireland responded to the hunger strikes. John Edwards for example, produced an exclusive feature on the reactions of the H-Block committee to the news of Sands’ death. Maria McCroy, the chief organiser of the Belfast H-Block committee, told Edwards that, “the British government stupidly and callously let Bobby Sands die”, and emphasised the “frustration and anger of people who have been peacefully demonstrating for unanswered demands”.

The hunger strikers’ drastic actions had introduced an Irish voice into the British media’s coverage of the Troubles, in a way that bombings and other forms of sectarian violence did not. Despite this, the British press sought to undermine the political significance of the hunger strikes, using them to further vilify the IRA and justify the government’s strategy towards Northern Ireland.

Roseanna Doughty is a second year PhD candidate at the University of Edinburgh researching representations of the Troubles within the British media, 1973-1997, and how this affected the Irish in Britain