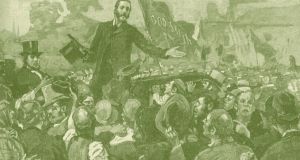 As Ireland comes out of its decade of centenaries, it is timely to widen our peripheral vision and to take a slightly broader view.

Around the flashpoints of violent conflicts there are the deeper currents that have shaped Ireland as it moved into the 20th century and towards independence. These currents played out on a larger, global scale, moving between America, Australia, mainland Europe and Bengal.

They played out in a longer duration, in which the decade of 1911-1921 was not so much a rupture with the past as the explosive discharge of tensions that had been building for a while. And they played out in an Ireland increasingly troubled by its inner multiculturalism, as forcelines and faultlines shifted between traditional, rural culture in the West, urban English-language culture in the middle-class suburbs and working-class slums of Dublin, and Protestant, Scottish-rooted unionism in the North.

One man stands at the crossroads of these tensions: Charles Stewart Parnell; one man – or rather the bereft sense of political hollowness that his downfall and death in 1890 left behind.

We know how the narratives and poetry of writers like Joyce and Yeats, and even Bram Stoker, are grappling with the Fall of Parnell throughout the 1890s and 1910s. Redmond could not fill this void politically; and the crater left behind by the Parnell explosion was the hollow core around which most of Irish political and cultural life took shape between 1890 and 1916.

Paternalist authoritarian, political power-broker, conduit between grassroots revolt and parliamentary politics: Parnell was all that. His capacity to channel Irish grievances and to force these onto the political agenda of an unwilling British empire made him almost larger than life. He was a projecting-screen for messianic yearnings, a traumatic sense of loss and an unquiet refusal to lay the past to rest.

In uniting all those qualities, some self-chosen, some thrust upon him, Parnell is best qualified by a term widely used, even over-used today: he was the prototype of a “charismatic leader”. Indeed the notion of charismatic leadership developed in the decades between Carlyle and Max Weber; it took shape as Parnell’s career took shape, and Parnell may be the first and best modern-day example of a political authority leading by force of charisma.

If Daniel O’Connell, with his mass rallies, invented a type of popular protestation that foreshadows Martin Luther King, Parnell’s capacity to be both a street fighter, Kilmainham prisoner, and parliamentary leader – a law-breaker and a law-maker at the same time – foreshadows the great authoritarian disruptors of the post-1914 generation in Europe, from Hungary’s Deák to Czechoslovakia’s Masaryk to Portugal’s Salazar (and indeed de Valera).

The only thing that distinguished Parnell from most charismatic-authoritarian leaders of the twentieth century is that these latter, taking centre stage in post-1918 turbulence, relied increasingly on the prestige of their military heroism earned in combat during the war: Finland’s Mannerheim, Germany’s Hindenburg, France’s Pétain (and later de Gaulle), Poland’s Pilsudski – not to mention more unsavoury examples.

They combined their charismatic leadership with a military-style idea of the discipline that needed to be imposed on the state, and it is here that we can discern some of the source traditions from which fascist dictatorships would spring.

Within Ireland, that “combat charisma” was claimed most effectively by Michael Collins, but his political career was violently nipped in the bud, and Ireland, within 10 years of its horrendous civil war, held elections. And when the governing party lost those elections, they peacefully ceded power to the electoral victors. That was in 1932, and it made Ireland a shining exception in a Europe that was everywhere self-abolishing its parliamentary liberties and yielding up power to authoritarian strongmen and dictators.

Even in these days, when we see the reluctance of a charismatic populist, Donald Trump, to commit to a peaceful transition of power, and this in the very cradle of Western democracy, the lesson of Ireland in 1932 deserves to be taken to heart.

It is not an exaggeration that Parnell stands at the beginning of a notion of charismatic leadership that has spread far and wide in the western world in the century and a half after his downfall and death. That alone would warrant a fresh look at this towering figure, who even in his very absence would dominate a revolutionary decade when things fell apart and passionate intensity ruled the day.

It was not the object of this book to return to a “Great Men” view of history; historians have well and truly abandoned the mode of “hero-worship”, when it was thought that the titanic or demonic power of certain supremely forceful personalities could single-handedly shape the course of events.

After all, Parnell was neither a Napoleon nor a Bismarck, neither a Sukarno nor a Gandhi; his ambitions ended in failure and his career ended in ruin. That view makes him, paradoxically, all the more interesting. Parnell may be the first Irish leader who was brought down by the Irish themselves. The adultery, the scandal, the machinations, and the quicklime thrown into his eyes at the end: all that was déanta in Éirinn.

This, as many passages in Joyce’s Dubliners and A Portrait show, made it all the harder to get over his failure: no outside forces could be blamed for it, and the familiar formula of “English misrule and Irish misfortune”, perhaps for the first time in history, failed to be applicable.

Ireland entered into a modern political ethos, beyond the tragic or melodramatic victim-narratives of romantic vintage, when it realised that empowerment and agency come with self-responsibility – a bitter lesson learned again at the demise of the Celtic Tiger and the breaking of various women- and child-abuse scandals more recently.

The interest of Parnell for this retrospective volume lies primarily in the fact that he was a nodal figure, at the crossroads between different trends and forcelines, all of which he helps us to understand better. This applies not least to the fact that his career exemplifies the last possible coalition between the landlord class and the emerging petite bourgeoisie. It is moot whether this dual appeal could also embrace the rural peasantry or the industrial North and its non-Anglican Protestants; and in any case the nationalist Ascendancy and an increasingly mobilised white-collar Catholic populace parted ways after his death – something that Yeats found to his chagrin.

Parnell, a multifaceted figure with a remarkable, novel force of personality and a tragic grandeur even in his failure, captures many aspects and emerging trends of an Irish society that was headed for violent disruptions and transitions after his demise. This is what inspired the scholars assembled in this volume. Hailing from many different specialisms in Irish studies, all enjoy a high reputation in their field. As former Parnell Fellows of Magdalene College Cambridge they all felt it this was a good time to use him as a multi-faceted mirror for bringing together the many aspects of Ireland as, under Parnell’s shadow, it embarked on its journey into the twentieth century.

Parnell and His Times, edited by Joep Leerssen, is out now from Cambridge University Press. Read our review of it here