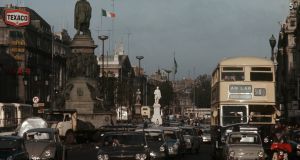 Everybody knew about the sun coming out on June 16th, and so the bus had to stop every 25 feet or so to pick up another passenger bound for the shimmering waters. Photograph: Gety Images

When I was a young lad the sun used to shine all day on the sixteenth of June. Up it came at ten to five in the morning and didn’t disappear until twenty past ten that night. We lived five miles from the sea and one Bloomsday morning my mother gave me a pound and said, ‘Off with you now, go get a tan and figure out your life’. So I made my way to the station, gave the pound to the bus driver, sat in behind him and stared out at the clear blue sky.

The thing was everybody knew about the sun coming out on the sixteenth of June, and so the bus had to stop every twenty-five feet or so to pick up another passenger bound for the shimmering waters. By my steadily improving mathematical calculations that meant the bus was going to stop more than a thousand times before reaching the sea. I was glad I had inherited my father’s knack for patience.

To help distract everyone from the start-stop nature of the journey the bus driver provided a running commentary. ‘It’s a great day to be alive,’ he said as people clambered aboard. ‘I wish I had the day off myself,’ he offered as he punched holes in tickets. ‘You are lucky, lucky people,’ he declared as he eased the bus back into motion.

About four hours into our journey, with over half of the five-mile trip already behind us, the driver stopped the bus even though nobody had flagged it down.

’I’ll be back in a second,’ he said, climbing out of his seat. ‘I want to ask that foxy lady a question.’

She was leaning against a wall, licking an ice-cream cone. Some ice-cream was smeared across her top lip. She was wearing a white dress, and every few seconds some wind reached in off the close-by sea and lifted the dress a few inches above her knees. The bus driver leaned against the wall beside her. He plucked a long stem of reed-grass and started chewing on it. After a moment he pointed to the ice-cream cone. The lady passed it over, and he ditched his reed and took a gob-full. When the ice-cream was gone the lady jerked a thumb over her shoulder. Then the two of them disappeared inside the house set back off the road. We all stared out to see what was happening. Some passengers became worried.

’Yes, but how are we going to get to the beach?’ said another. ‘That lad is very distracted.’

’Does anyone know how to drive a bus?’

Instead, one or two older men took it upon themselves to replace the absent bus driver. They strode purposefully through the aisle of the bus, one with a poor excuse for a moustache growing above his lip, the other wearing a straw hat and a jacket with stripes. The man trying to grow a moustache winked as he passed the worried ladies, as if to say, don’t panic girls, I’ll have us on the way to the sun in a jiffy. But when he and his accomplice reached the driver’s seat they realised the bus man had taken the keys with him. At once they threw their arms into the air, turned to their expectant crew members with a look of helplessness and the fretting started all over again.

’Look,’ someone to the back of the bus spoke out, with traces of fear entering his voice. ‘The sun is starting to go down.’

There wasn’t much talking after that. Everyone sat back into their seat, sighing at the fading sun and at the sombre shadow gradually enveloping the countryside. Then we spotted the bus driver. He was rushing down the pathway of the house he had been inside, tugging his shirt back into his half-way-down trousers. His hair was tossed and one of his shoes was missing. As soon as he climbed into his seat he was in no mood to hang about.

’I’ll drive you all home personally,’ he said, and one or two women raised their eyebrows.

’That was one reluctant bus driver,’ said the lady who thought she was going to die when we pulled up at my stop.

‘Young lad,’ he said as I stepped off, and he flipped a coin at me. At once I made a dash for Mel Campbell’s paper shop, he always stayed open late.

‘I’ll have an ice-cream cone,’ I said to the girl behind the counter. ‘One with a flake in it.’

She took a cone from the stack beside the ice-cream machine, pulled the lever and, once she could pile on no more, offered me the towering sculpture along with a smile that, in times to come, would make the wind blow across my soul. It was more or less dark when I stepped inside the kitchen of our house.

‘That’s not much of a tan,’ my mother said when she looked up from her paper.